There were two stakes races on Sunday at Woodbine with potential Sovereign Awards implications, contested under overcast skies with a stiff headwind in the stretch and temperatures in the 40's. The first stakes race on the card was the $150,000 Jammed Lovely Stakes for 3-year-old fillies foaled in Ontario. Just five went to post in this 7 furlong sprint on the main Polytrack, but all eyes were on the 1-2 favorite Ginger Brew. After winning the Calder Oaks in April and then the Woodbine Oaks in early June, she finished a fast-closing second by a head against males in the Queen's Plate. She was making her first start off the 4 month layoff, but more importantly, this was her third start of the year, qualifying her for the Sovereign Award for champion 3-year-old filly and possibly Horse of the Year. Unlike the Eclipse Awards in the U.S., the Sovereign Awards require horses to make 3 starts in Canada to qualify (2 for juveniles).

As expected, new jockey Patrick Husbands sent Ginger Brew to the front exiting the chute as she opened up a 1 length advantage over Authenicat through an initial quarter of 23.50. Around the far turn, Nicki Knew moved up to challenge and briefly poked her head in front after a half in 45.73. Nicki Knew tired at the 1/4 pole as Authenicat moved up to challenge Ginger Brew, getting to within a length of the lead in mid-stretch after 3/4 in 1:09.21. However, Ginger Brew was up to the task, kicking in late under mild urging and drawing away to an impressive 4 1/4 length victory in 1:21.75. It was another 3 lengths back from Authenicat to Nicki Knew third, who held off late-closing Lady d'Wildcat by a nose. Hello Maggie May trailed throughout and finished 3/4 length behind Lady d'Wildcat. 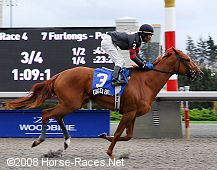 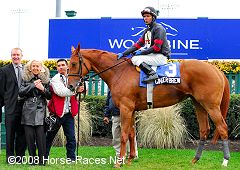 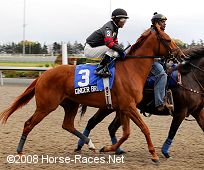 Left: Ginger Brew in the winner's circle. Winning trainer Bryan Lynch said, "She's a joy to be around. She has the manners of a princess. She steps up when you need her. There's a race for her at Calder. It's at 1 1/8 miles on the turf." (My Charmer Handicap, Grade 3 on December 6) 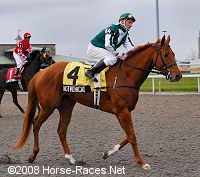 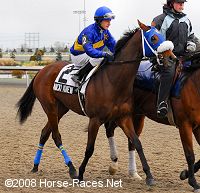 Left: Second place finisher Authenicat returns after the race. The 4-1 second choice broke well and pressed the pace under regular rider Robert Landry, challenged for the lead in mid stretch but was no match for the winner. The Josie Carroll trained daughter of D'wildcat improved her record to 5 wins, 6 seconds, and 1 third in 14 starts, earning $545,277 for owners Vinery Stables and Fog City Stables.

Right: Third place finisher Nicki Knew in the post parade. The 10-1 fourth choice was rated in third down the backstretch under jockey Jim McAleney, took the lead briefly on the far turn, but was passed by the eventual first two finishers entering the stretch and chased them home, finishing third beaten 7 1/4 lengths. The Kevin Attard trained daughter of Tethra improved her record to 3 wins, 2 seconds, and 3 thirds in 11 starts, earning $348,800 for owner-breeder Knob Hill Stable.

The $150,000 Autumn Stakes (G2) featured a field of nine older horses going 1 1/16 miles on the main track in the twilight. With Approval Stakes winner Ice Bear was sent off as the lukewarm 3-1 favorite, exiting a close second place finish in the Labeeb Stakes last time out. In to challenge him included 7-2 second choice True Metropolitan, winner of this race last year but exiting a fifth place finish in the Premier at Hastings Park and winless since the Eclipse Stakes in June. Palladio was the 4-1 third choice on the board, winner of the Durham Cup last time out after finishing a distant seventh in the Woodbine Mile.

7-1 Rosberg led the field first time past the stands and around the clubhouse turn, getting the initial quarter in 25.06, before favorite Ice Bear moved up to set the pace. Ice Bear set fractions of 48.77 and 1:11.84 down the backstretch and around the turn while being pressed by Palladio to his outside. Entering the lane, 10-1 Stunning Stag, who was 6th early and wide around both turns, closed 5 wide to take over the lead from Ice Bear in midstretch after 1 mile in 1:36.65. However, 9-2 fourth choice Marchfield, who was 8th for the first 6 furlongs, found room in midstretch after encountering traffic trouble and closed late to win by 1/2 a length in 1:43.28. It was just a neck back from Stunning Stag to favorite Ice Bear third. 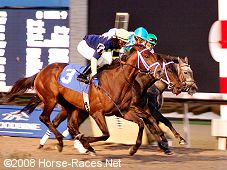 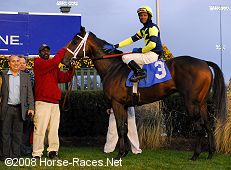 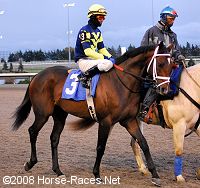 Left: Marchfield in the winner's circle with trainer Mark Casse on the far left. Casse said, "He's been really sharp. I had a tough time getting the saddle on him. He wanted to kick me. He's a really talented horse when he puts his mind to it." Casse added that Marchfield would spend the winter at Santa Anita.

Right: Marchfield in the post parade. Winning jockey Patrick Husbands, who swept both stakes races on the card, said, "I was stalking Stunning Stag the whole way. He had a perfect trip. At the 1/4 pole, Jono (Jones, aboard Stunning Stag) went four-wide. I didn't want to go six-wide, so I took the shortcut. I got stopped at the 1/8 pole, inside of (Ice Bear). I checked him off heels and then I got him back to the outside. He was much the best." 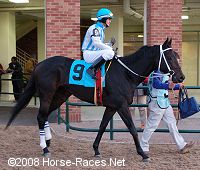 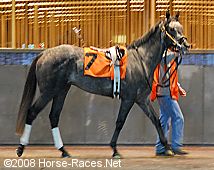 Left: Second place finisher Stunning Stag heads out to the track before the race. The 10-1 sixth choice was wide around both turns while 6th under new jockey Jono Jones, took a short lead at the 1/8 pole but could not hold off the winner late, finishing second beaten 1/2 a length in his stakes debut. The Sid Attard trained son of Running Stag improved his record to 5 wins, 5 seconds, and 1 third in 15 starts, earning $283,747 for owner Janice Attard.

Right: Third place finisher and beaten favorite Ice Bear in the indoor paddock before the race. The 3-1 favorite contested the pace for the first 3/4 mile under jockey Chantal Sutherland, dueled into the stretch but was outfinished late, beaten 3/4 length. The Macdonald Benson trained son of Maria's Mon improved his record to 6 wins, 4 seconds, and 1 third in 20 starts, earning $527,308 for owner-breeder George Strawbridge Jr. (Augustin Stable).