Opening day of the new track at Ajax Downs

On Saturday June 6, Ajax Downs began a new era in its history when it kicked off the 2009 Quarter Horse racing season on its new 5 furlong oval track. For 40 years, racing at the former Picov Downs was conducted on the "J-track", a straightaway with a sharp right hairpin turn to the runout, but this limited racing to the length of the straight, a distance of 440 yards. The final race on that surface was run last year on September 21 and the name was changed to Ajax Downs. With the new oval, straight races of 440 yards out of the chute are possible, as well as longer races around the turn.

Weather delayed opening day by 2 weeks, but it was worth the wait. The new facility is very modern compared to the rural, grass-roots feel of the old track, which was at the opposite end of the property. The bleachers are attached to the slots/simulcast building, and there is a relatively large paddock located next to the track about 1/16 mile before the finish, easily viewed from the rooftop patio adjacent to the simulcast room. The racing surface is a brand-new, conventional dirt track with a modern safety rail on the inside, in stark contrast to the old wooden rails seen on the J-track. The video toteboard was not yet in operation, so video replays, odds, and payouts were only available indoors on the TV's, and the races appeared to be hand-timed as no teletimer equipment was installed at the finish line yet.

The historic first ever race on the new oval was a $7,500 claiming race for older horses, with a purse of $7,500. A field of 8 (7 betting interests) went to post in this 300-yard straight run, with the two-horse entry of This Okey Country and Dales Royal Dash at 3-2 on the morning line. This Okey Country had not raced since November 2007 at Lone Star Park, while Dales Royal Dash was unraced since last August at Ajax Downs. At the break, Dales Royal Dash veered in and bumped Im a Corona into his mate This Okey Country who was pushed into the path of Twaynas Flight, nearly knocking him down and unseating his jockey Ed Walton. Dales Royal Dash recovered from his bad start and took the lead at the halfway point, crossing the line 3/4 of a length in front of Eysa Kickin Willie in a time of 15.88 seconds. A sequence of photos from the start is shown below.

A lengthy stewards' inquiry ensued, and due to the chain reaction from the bumping at the start, Dales Royal Dash was disqualified to last. Eyesa Kickin Willie was declared the winner, but he had already returned to the barn and thus no winner's circle ceremony was conducted. Adding to the intrigue, all bets on the race were refunded due to a tote malfunction.

The second race, a 250 yard, $5,500 speed index race for older horses, went off without a hitch with 7-2 second choice Marked Cod and jockey Dave Griffith closing from sixth to nose out 4-1 third choice Madam Shazoom and jockey Jesse Daigrepont at the line in a photo finish in 13.60 seconds. It was another neck back to Lucky Eyes third. This race also had an inquiry, but this was disallowed. As there were payoffs posted, this makes Saturday's second race the first official pari-mutuel race over the new oval.

Although opening day had a few glitches, the new track is a step in the right direction for Ajax Downs. The track will run a total of 35 dates through October (every Sunday with some Saturdays) with total purses in excess of $5 million. The $105,000 Alex Picov Memorial Futurity on October 4, the $105,000 Alex Picov Memorial Championship (G3) on October 11 and the $100,000 Ontario Jackpot Futurity on October 18 highlight the stakes schedule. 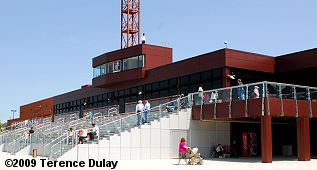 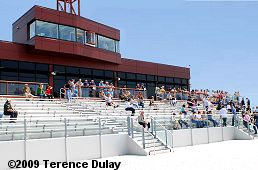 Two views of the new stands with the rooftop patio next to the simulcast center seen in the one on the left. The inside of the building is all slots and simulcasts, with live racing only on the outside. 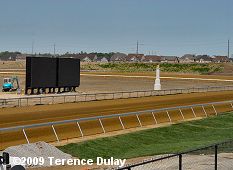 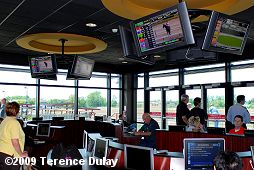 Left: Looking across the track at the finish line and new video toteboards. Obviously they are still working on landscaping and hopefully there will be more than just an empty expanse of dirt there soon.

Right: The simulcast center inside the building with the paddock seen through the windows. 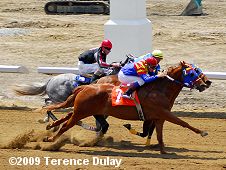 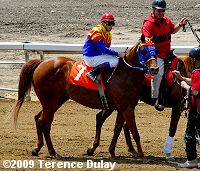 Left: The finish of the second race won by Marked Cod on the outside. A nose back in second is Madam Shazoom and Lucky Eyes a neck behind her in third.

Here is the full sequence of the chain reaction bumping in the first race.