Closing day of the 'J' track at Picov Downs

People mostly associate horse racing in Ontario with either Thoroughbreds at Woodbine and Fort Erie, or standardbreds at one of the many harness tracks across the province, led by Woodbine and Mohawk. However, quarter horse racing has been conducted in Ontario in the town of Ajax east of Toronto since 1969, with official AQHA sanctioning awarded in 1971. Founded by Russian immigrant Alexander Picov on his family's farm as Picov Downs, the track now known as Ajax Downs had a unique J configuration, a 440 yard (1/4 mile) straightaway with the horses taking a sharp hairpin right turn for the runout.

Sunday, closing day of the 2008 meeting, marked the end of the J-track era at Ajax Downs, as a new 5 furlong oval with modern amenities such as a 600-seat grandstand and a video display toteboard will greet racing fans on May 24, 2009. Purses have skyrocketed since Ajax Downs opened its new slot machine and simulcasting facility two years ago, and last year the track ran its first $100,000 stakes race. Track officials hope that even with the upgrades, the track will continue to be a family-friendly place. Operations Manager Ken Richards said, "The Downs is a place where families come to enjoy the races, have a picnic, and see the horses up close."

The closing day feature at Ajax Downs was the $129,200 Alex Picov Memorial Championship (G3), the first AQHA graded stakes race ever run in Ontario. A field of 8 older horses contested this 440-yard dash, with Reckless Bug the 3-2 favorite exiting a 1/2 length defeat in his trial heat on September 7. However, 6-1 shot Illbegoneinajazz and jockey Tony Phillips came on in the final yards down the center of the track to get up by a head between Strawflyin Fitness on the stand side and pacesetter Rockish on the far side, in a time of 21.92 seconds over the fast track. Favorite Reckless Bug finished last of all. 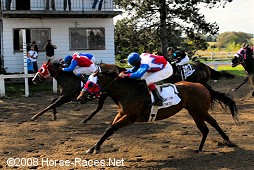 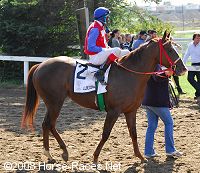 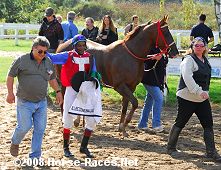 Left: Illbegoneinajazz heads for the winner's circle after the race.

Right: Illbegoneinajazz and his happy connections head back to the barn after the race. Illbegoneinajazz is a 4-year-old chestnut mare by Jazzing Hi out of the Chicks Beduino mare Likeachicillbegone, bred by Fred and Carolyn Helmuth. The Joe Tavares trainee improved her career record to 8 wins, 4 seconds, and 4 thirds in 21 starts, earning $110,429 for owner Christine Tavares. 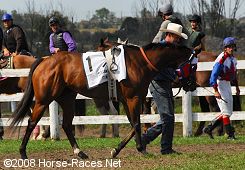 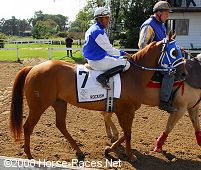 Left: Second place finisher Strawflyin Fitness in the paddock before the race. Strawflyin Fitness is a 6-year-old bay mare by Strawflyin Buds out of the On A High mare Gentlemen N Cash, bred by Vicki I. Coldiron. The Lynn Farrell trainee improved her career record to 6 wins, 13 seconds, and 3 thirds in 29 starts, earning $76,745 for owner Brian Farrell. Regular rider John McInerney was in the irons.

Right: Third place finisher Rockish in the post parade. Rockish is a 4-year-old sorrel gelding by Rocky Jones out of the Leaving Memories mare A Mere Formality, bred by Ralph and Carolyn Fales. The Greg Watson trainee improved his career record to 7 wins, 2 seconds, and 5 thirds in 21 starts, earning $95,043 for owner Full Circle Racing. 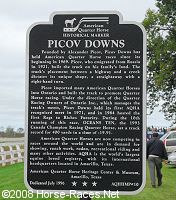 Left: The historic marker at the entrance to Picov Downs. Founded in 1969 on his family's land by Alexander Picov, a Russian immigrant, the track has a unique "J" shape with a 440 yard straight and a right hand turn for the run out. Today was the last day of racing on the old track which will be replaced with a 5 furlong oval for next season. The name was also changed to Ajax Downs.

Right: The horses in the paddock before the big race. The huge mounds of dirt behind it are from the construction for the new track. 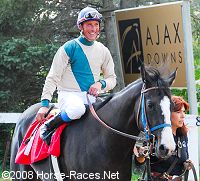 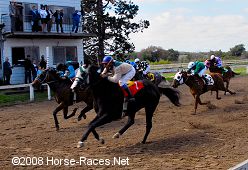 Left: Jockey Dean Deverell smiles about his win in the consolation for horses who didn't make the field for the Alex Picov Memorial Championship. Followers of Woodbine racing may remember jockey Dean Deverell who was a finalist for the 2007 Sovereign Award for top apprentice jockey. In August he announced his retirement from Thoroughbred racing and returned home to Ajax Downs, where he had been a top rider for many years before making the switch across town to Woodbine two years ago.

Right: The finish of the consolation race. 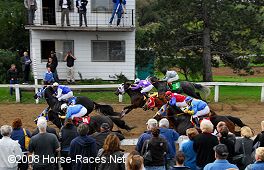 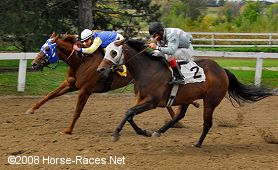 Left: The finish of an earlier race on the card as seen from the top of the bleachers. 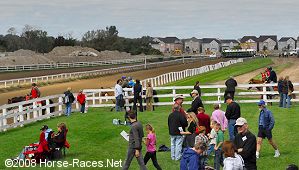 Left: The view as you come into the track with the judge's stand on the left and the bleachers on the right.

Right: The horses come out of the paddock for the post parade. You can see the starting gate at the end of the track in the background.