There were three stakes races on Sunday at Santa Anita, all over 1 mile around two turns of the turf course. Conditions were typical for early October in Arcadia for the 9,547 fans in attendance, with sunny skies and temperatures in the mid 80's. The feature race on the card was the $200,000 Zuma Beach Stakes (G3) for two-year-olds going 1 mile on the turf. Packs a Wahlop was sent off as the even money choice in the field of 11 off his win in the Del Mar Juvenile Turf (G3) on September 11. In to challenge him included 11-2 second choice Giver Not a Taker, undefeated in 2 starts including the I'm Smokin Stakes, and 6-1 third choice Dandy Man Shines, still a maiden off a 4th place finish in the Vintage Stakes (G2) at Goodwood and a 3rd placing in the Del Mar Juvenile Turf. 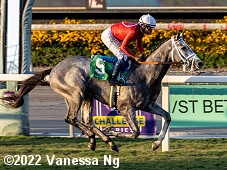 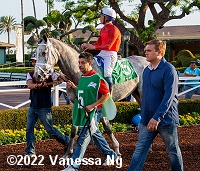 Left: Packs a Wahlop in the winner's circle. Winning trainer Jeff Mullins said, "He's probably one of the best ones I've had my hands on for a while. When he was in Florida, he was doing things that were not normal. Unfortunately, he hit a muddy track (at Gulfstream) and didn't really handle it that well. Once he hit the grass, he's just a really nice horse. (Owners) Tim and Jed Cohen are great guys, they've been the best part of my career for the past three or four years, so I want to thank them and it's just a blessing to have a horse like this."

Right: Packs a Wahlop in the walking ring before the race. Winning jockey Mike Smith said, "On top of such a big, beautiful stride, this horse is just so athletic.  He doesn't seem like a 2-year-old, I swear he's four!  He's naturally quick, with a very high cruising speed so he puts you right where you need to be.  If they let him go, he'll keep on running and if someone else wants to go, he settles in behind them.  I mean, when I asked him to run, he just opens up that stride and it's crazy. It feels great to win two stakes today.  Keeping me young.  I'm going back in age." 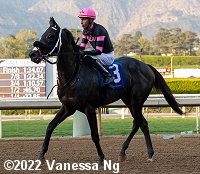 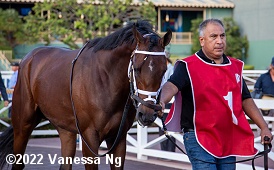 Right: Third place finisher Malibu Coast in the walking ring. The Mike McCarthy trainee improved his record to 1 win and 1 third in 2 starts, earning $72,000 for owners The Warnick Stable and Joseph Hinkhouse.

Jockey Mike Smith sent 20-1 Queenzy to the lead first time by and she set fractions of 22.62, 47.22, and 1:11.26 while pressed by Sell the Dream and stalked by Excelia and 8-1 fourth choice Fast and Shiny. Into the stretch Queenzy tired allowing Sell the Dream to inherit the lead through 7f in 1:23.19, but favorite Comanche Country, 5th early under Umberto Rispoli, came out wide for room and rallied to win by 1/2 a length in 1:35.20. It was another 1 1/2 lengths back to 43-1 longest shot Bolt's Broad third. 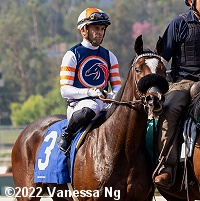 Left: Comanche Country in the winner's circle. Winning trainer Phil D'Amato said, "This filly, she just continues to get better and better.  Umberto rode her with a lot of confidence.  He gave her a nice ground-saving ride, he angled out and she wanted to win today.  I think this will buy us a ticket to the Breeders' Cup (Juvenile Fillies Turf) at Keeneland."

Right: Comanche Country in the post parade. Winning jockey Umberto Rispoli said, "I had the spot I wanted, I was on the fence and saved ground. On the backstretch I just used her a little bit to make sure that I could hold my position. Around the turn, I knew the horse was able to carry me to the wire. I was just waiting for the quarter pole to put her in the clear. She did the rest, she carried four pounds over a majority of the others, so it was a big effort." 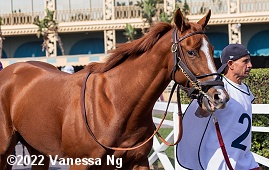 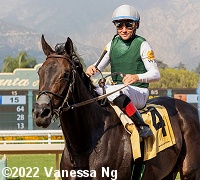 Left: Second place finisher Sell the Dream in the walking ring before the race. The Brian Koriner trainee improved her record to 1 win, 2 seconds, and 1 third in 4 starts, earning $127,260 for owners Edward Rusty Brown, Alan Klein, and Philip Lebherz.

The $80,000 Swingtime Stakes featured a field of seven older fillies and mares going 1 mile on the turf. Osunitas Stakes runner-up Hamwood Flier was sent off as the 4-5 favorite over 9-2 second choice Counterparty Risk off an allowance win and 11-2 third choice Warrens Candy Girl, winner of the Solana Beach Stakes.

Hamwood Flier stumbled at the start but recovered quickly and was sent to a clear lead by Mike Smith through fractions of 22.81, 45.46, and 1:08.81 while as many as 8 lengths in front of 11-1 Natural Colour and 16-1 Javanica giving chase. Into the stretch, Counterparty Risk put in a late rally from 6th closing the gap to 2 lengths but Hamwood Flier easily turned her away to win by 2 1/4 lengths in 1:33.34. It was a nose back to 8-1 fourth choice Sugar Fix third. 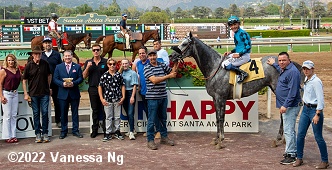 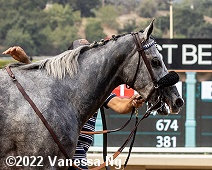 Left: Hamwood Flier in the winner's circle. Winning jockey Mike Smith said, "She's so quick she didn't get her feet back underneath her. She just leaves the gate extremely fast and she's just naturally a quick filly. Thanks to Phil, I've been hassling him for a mount now for about two months. He finally said, 'I think I got you one man, one who can win.' and he put me on the right one. You know Richard Migliore always said, 'It's not how fast they go, it's how they go fast.' so, that's kind of the way we played it today. I know she's kind of quick and I'm not going to try to go out there at a 24, 48. I'm just not going to get that out of her. If that happens it's probably because she has a temperature or something. She is just naturally fast and sometimes that's their asset, that's their weapon and I just used it to her advantage."

Right: Hamwood Flier heads back to the barn. Winning trainer Phil D'Amato said, "Joe (Bravo) did nothing wrong, we just wanted to make a little change.  We were like a length or two away from winning a stake and I don't know if the rider switch made a difference or not, but this fast turf course sure helped today.  Mike did a masterful job. Gotta keep it rolling.  Gotta keep paying the bills."