Opening weekend for Santa Anita's fall meet concluded with the premier race for older fillies and mares, the $200,000 Zenyatta Stakes (G2), a 1 1/16 mile main track trip and part of the new Breeders' Cup Dirt Dozen series, with the winner earning a $30,000 credit, the runner-up earning a $15,000 credit, and the third place finisher a $7,500 credit, to be applied to the entry fees for the 2022 Breeders' Cup Distaff at Keeneland on November 5. Conditions were similar to Saturday, with sunny skies and temperatures in the mid 80's for the 11,028 fans in attendance. Midnight Memories was sent off as the 8-5 favorite in the short field of 5 off her win in the Torrey Pines Stakes (G2) at Del Mar. In to challenge her included 9-5 second choice Awake at Midnyte, seventh in the Eight Belles (G2) at Churchill Downs before winning an allowance at Del Mar, and 7-2 third choice Soothsay, winner of the Indiana Oaks (G3) before finishing fourth in the Clement L. Hirsch (G1). 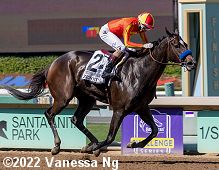 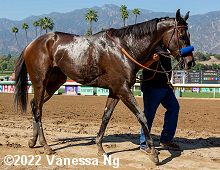 Left: Midnight Memories in the winner's circle. Winning trainer Bob Baffert said, "We have taken our time with her. The Mastery fillies seem to be slow coming around. We have had to be patient with her. She got into a nice rhythm today and when Ramon asked her in the lane, she took off. She is really improving."

Right: Midnight Memories heads back to the barn after the race. Winning owner-breeder Paul Weitman said, "She had a little problem coming out of the gate. She was like spinning her wheels, but Ramon was patient with her, brought her up and turned for home fast. She's had a little tiny problem sometimes in the Paddock of acting up just a little bit, but today she was calm, and I watched her in the Paddock, and she was as calm as she could be. I think that is important that she doesn't get worked up." 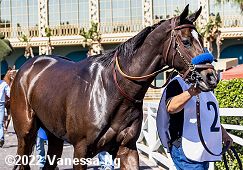 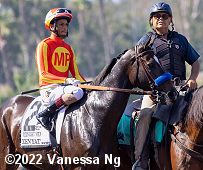 Left: Midnight Memories in the paddock before the race. Asked about the Breeders' Cup, Baffert added, " I'm not sure what the (Breeders' Cup) Dirty Dozen means, but we'll figure it out. We have a few spots held on the plane. We just have to figure out who's going to fill those spots."

Right: Midnight Memories in the post parade. Winning jockey Ramon Vazquez said, "I felt really good today. I concentrated on the race and told myself to do my best. From the beginning of the race, we took a nice position, and in the last quarter (Midnight Memories) ran really well." 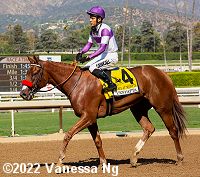 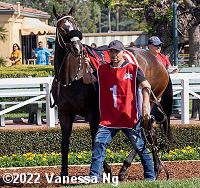 Left: Second place finisher Awake at Midnyte returns after the race. The Doug O'Neill trainee improved her record to 2 wins, 3 seconds, and 1 third in 8 starts, earning $249,675 for owner Reddam Racing.

Right: Third place finisher Empire House in the paddock before the race. The Jonathan Wong trainee improved her record to 4 wins, 5 seconds, and 1 third in 23 starts, earning $188,970 for owner Tommy Town Thoroughbreds. 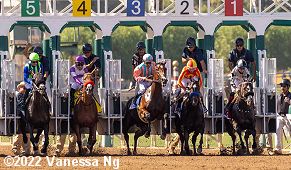 The $100,000 Chillingworth Stakes (G3) featured a short field of 5 older fillies and mares sprinting 6 1/2 furlongs on the main track. Breeders' Cup Filly and Mare Sprint (G1) winner Ce Ce was sent off as the 3-10 favorite off her disappointing fifth in the Ballerina (G1) at Saratoga. In to challenge her included 3-1 second choice Teddy's Barino, winner of 4 straight including the Tranquility Lake Stakes last out, and 5-1 third choice Under the Stars, fifth in the Torrey Pines (G3) after winning the Summertime Oaks (G2). 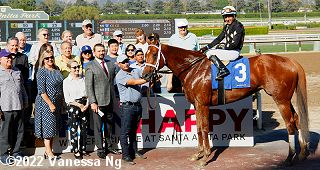 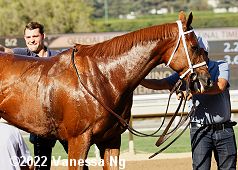 Left: Ce Ce in the winner's circle. Winning trainer Mike McCarthy said, "I knew you could draw a line through that last one. I think she is as good as she was last year. I knew that race at Saratoga was too bad to be true. She was going in good form. She was in the one hole and she got dirt in her face. I know now why they call Saratoga the graveyard of champions. This was a good tune-up for the Breeders' Cup (Filly and Mare Sprint)." Winning owner-breeder Bo Hirsch added, "She's the type of filly that you just never know. She could get up on the wrong side of the bed sometimes and fool you. That was always in the back of my head. She ran like a 1-5 (odds) should run and I'm so happy. We are all on schedule to go to the Breeders' Cup, I'm so excited and God willing, we'll be there.

Right: Ce Ce gets hosed off after the race. Winning jockey Victor Espinoza said, "She ran her race, and that's all I want from her. It doesn't matter what happens during the race, as long as she can run her best, it'll be good and that's what happened here today. She's always good, she's a pro. She can be a little picky and when the track is not her thing, then she will not perform, like the last race in Saratoga. I'm so excited to ride her for the second time in the Breeders' Cup! I was really proud of her and the way she ran today." 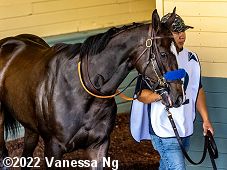 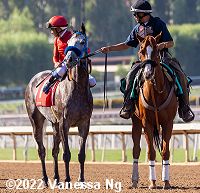 Left: Second place finisher Under the Stars in the paddock before the race. The Bob Baffert trainee improved her record to 3 wins, 2 seconds, and 2 thirds in 9 starts, earning $357,020 for owners Mrs. John Magnier, Michael Tabor, and Derrick Smith. 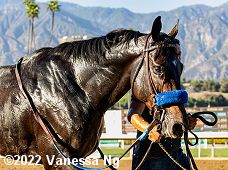 Left: Heywoods Beach in the winner's circle. Winning trainer John Sadler said, "He's a good marathon horse. He's run well, he's won here at 1 1/4 in the past and won twice now at 1 1/2. I noticed last year (Ramon) won quite a few of these races on (a horse named) Lone Rock, so I think he has a fairly good touch at 1 1/2 on dirt. He rode (Heywoods Beach) at Del Mar and rode him well. Last time we really didn't get a good trip on the grass, but this is more his thing."

Right: Heywoods Beach heads back to the barn. Winning owner Kosta Hronis said, "Ramon rode him perfectly. We knew that those would be the fractions for the race, and we knew he liked the distance. It was a repeat performance of the Cougar at Del Mar. We are definitely thinking of the Breeders' Cup Classic and the Marathon. It's a taxing route, but John is giving it every consideration if he comes out of this race fine. We will wait and see." 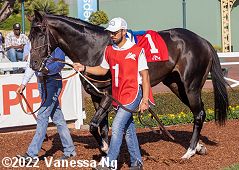 Third place finisher and beaten favorite Tizamagician in the paddock. The Richard Mandella trainee improved his record to 5 wins, 10 seconds, and 1 third in 24 starts, earning $738,851 for owners MyRacehorse and Spendthrift Farm.

The $100,000 Speakeasy Stakes featured a field of 9 two-year-olds sprinting 5 furlongs on the turf. Jockey Tyler Baze sent 9-1 Helladic to the front down the backstretch and around the turn through fractions of 21.06 and 43.36 while pressed by 2-5 favorite Speed Boat Beach and stalked by 7-1 second choice Straighten Up. In the stretch, Speed Boat Beach gained the lead and drew clear late under Juan Hernandez to win by 1 1/4 lengths over pacesetter Helladic in 55.25. It was another 1/2 length back to 17-2 third choice Ah Jeez third. 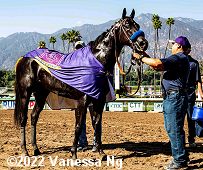 Left: Speed Boat Beach in the winner's circle. Winning trainer Bob Baffert said, "We filled one of the spots on the plane to Keeneland. I wasn't sure if he would like the turf or not. I told Juan that if he doesn't like the turf, raise your right hand. He hopped at the start of the race. He was a little green and he kept switching leads. At the 3/8 pole, he became serious and took off. This horse has pretty serious speed."

Right: Speed Boat Beach with his winner's blanket. Winning jockey Juan Hernandez said, "He's really fast and he's a really good horse. (Helladic) broke better than me, but I had the best position outside. I saw the inside horse trying to go, so I just let him go and I let my horse get comfortable because it was his first time on the turf and he was kind of looking around, wanting to see what was going on. Around the 3/8 he switched to the left (lead) and he started to focus and started running to win the race. He enjoyed it, he was just watching the horse in front of me and just wanted to see everything around him, but he focused, and he started to run by himself, I just let him roll."