Opening weekend for Santa Anita's fall meet concluded with the premier race for older fillies and mares, the $200,000 Zenyatta Stakes (G1), a 1 1/16 mile main track trip with the winner earning automatic entry into the Breeders' Cup Distaff. Conditions were similar to Saturday, with sunny skies and temperatures in the high 80's. After Hang a Star scratched, just four went to post with Fighting Mad sent off as the 2-5 favorite off wins in the Santa Maria (G2) and Clement L. Hirsch (G1). In to challenge her were 3-1 second choice Hard Not to Love, 6th in the Clement L. Hirsch, 4-1 third choice Harvest Moon, winner of the Torrey Pines (G3), and 18-1 longest shot Proud Emma, winner of the Tranquility Lake Stakes. 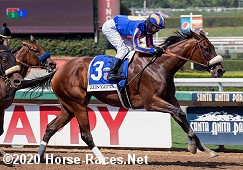 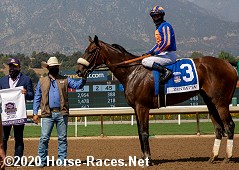 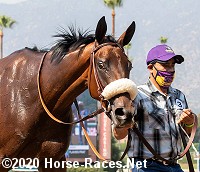 Left: Harvest Moon in the winner's circle. Winning owner-breeder Alice Bamford said, "I'm absolutely thrilled today, completely over the moon for Harvest Moon! She's a homebred and she's just so deep in my heart and my family's heart. It was so good to see her so well ridden today, showing off her beautiful stride. She came and did it against a very very good competitor in Fighting Mad. We're thrilled and we won, and we are in! We lost her mother this year, Qaraaba who was a stunning, stunning filly and each time I tell her, ‘Harvest Moon, go and do it for your Mama.' And she has."

Right: Harvest Moon heads back to the barn after the race. Winning trainer Simon Callaghan said, "We have been really patient with her early on and that's a credit to Alice (Bamford, breeder and co-owner) and Michael Tabor (co-owner). It was said that this filly has a lot of talent and they were so patient throughout the whole process. She took her time to come to hand, but she's come a long way in a short period of time." 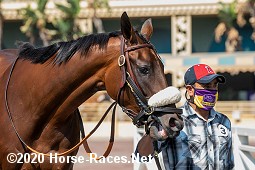 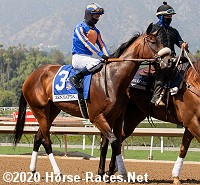 Left: Harvest Moon in the paddock before the race. Callaghan added, "(Running in the Zenyatta) certainly looks like a good decision now. Myself and Alice along with everyone else chatted and we felt at this stage keeping her here, receiving the weight from Fighting Mad was the right thing, it all worked out good. I'm super happy."

Right: Harvest Moon in the post parade. Winning jockey Flavien Prat said, "We thought Fighting Mad would go to the lead and we wanted to keep pressure on her. My filly had never been a mile and a sixteenth but Fighting Mad was carrying 126 pounds. You never know with a three-year-old against older, but we got eight pounds, so that was good. It turned out this was a good distance for my filly and she really ran well." 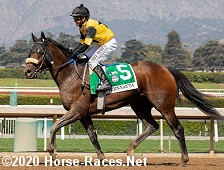 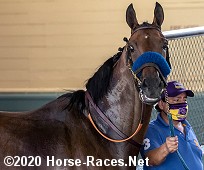 Right: Third place finisher and beaten favorite Fighting Mad in the paddock before the race. The Bob Baffert trainee improved her record to 5 wins, 1 seconds, and 1 third in 9 starts, earning $468,008 for owner-breeders Gary and Mary West. 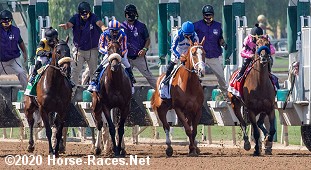 The $200,000 Santa Anita Sprint Championship (G2) featured a field of 5 older horses going 6 furlongs on the main track looking for automatic entry to the Breeders' Cup Sprint. C Z Rocket was sent off as the 7-5 favorite off his win in the Pat O'Brien (G2) at Del Mar. In to challenge him included 9-5 second choice Collusion Illusion, winner of the Bing Crosby (G1) and 2-1 third choice Flagstaff, 2nd in the Pat O'Brien.

Jockey Victor Espinoza sent Flagstaff to the lead exiting the chute through fractions of 22.33 and 45.27 while pressed by C Z Rocket and stalked by Collusion Illusion. In the stretch, Flagstaff continued to lead through 5f in 57.13 but C Z Rocket, moved out for room by Luis Saez, closed late to win by a head in 1:09.14. It was another 1 1/4 lengths back to Collusion Illusion third. 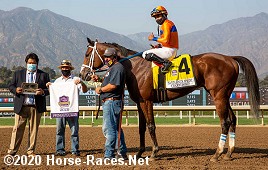 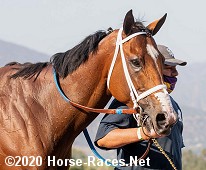 Left: C Z Rocket in the winner's circle. Winning trainer Peter Miller said, "I just wanted to win this race. It's a big race and this horse has won four in a row, so to win five in a row is big and puts us squarely in the picture for the Breeders' Cup Sprint. It was the owner, Tom Kagele who picked the horse. I wouldn't have picked him, his form was too bad to claim him, but I did like that he had run some fast races in the past. We thought if we could get him back into that form, he could be a very nice horse. You never think you're going to claim one and win a Grade 1 with them. We're definitely leaning toward the Sprint, he's won the last four (5) going one turn. We're going to keep him one turn."

Right: C Z Rocket heads back to the barn after the race. Winning jockey Luis Saez said, "I didn't expect to be that close, but he broke so sharp and he took me there. I decided to let him settle and keep him happy. When I pulled the trigger turning for home he took off. I love this horse, now he's ready for the real deal." 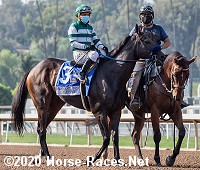 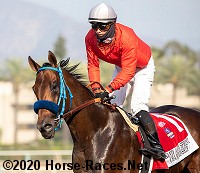 Closing out the opening weekend stakes action was the $100,000 Tokyo City Cup (G3), a 1 1/2 mile trip around 3 turns of the main track for older horses. Combatant was sent off as the 2-1 favorite in the field of 7, winless since the Santa Anita Handicap (G1) in March and 9th in the Del Mar Handicap (G2) last out. In to challenge him included 9-4 second choice Tizamagician, 10th in the Oceanside but winner of an allowance last out, and 7-2 third choice Azul Coast, winner of the El Camino Real Derby back in February but 5th in the La Jolla Handicap (G3). 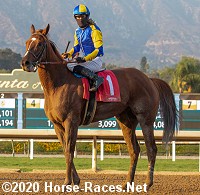 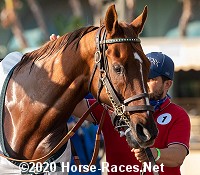 Left: Cupid's Claws in the winner's circle. Winning trainer Craig Dollase said, "Great group of guys (owners), they trusted me and I came up with this horse. I've been watching his form, when I saw him in the race we claimed him in (Sept. 5), I pulled the trigger and I was the only claim in there for him that day, things work out sometimes. I like the way he moves on the dirt. Flavien was nice enough to come out and work him last week and gave us the thumbs up, now here we are."

Right: Cupid's Claws in the walking ring before the race. Winning jockey Flavien Prat said, "It's been a great weekend I thought. Yesterday we had some good runs with (Get Her Number) and also United. Today (Harvest Moon) ran great, Collusion Illusion ran his race as well, with a tough post it's never easy. This horse as well, I give all the credit to Craig, I thought he made a great move going long on the dirt and it worked out well. You feel fortunate when you look at the program and you have such a great bunch of horses to ride all weekend long, it's a goal for every rider, I'm living the dream." 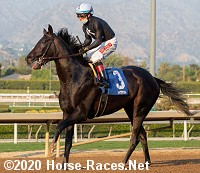 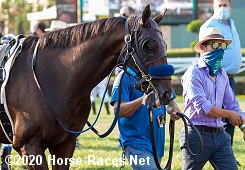 Left: Second place finisher Tizamagician returns after the race. The Richard Mandella trainee improved his record to 2 wins, 5 seconds, and 0 thirds in 12 starts, earning $140,851 for owners MyRacehorse.com and Spendthrift Farm.

Right: Third place finisher and beaten favorite Combatant in the walking ring before the race. The John Sadler trainee improved his record to 4 wins, 5 seconds, and 5 thirds in 28 starts, earning $1,049,498 for owner Hronis Racing.