The feature race at Santa Anita on Sunday was the $100,000 Santa Ysabel Stakes (G3) for 3-year-old fillies going 1 1/16 miles on the main track worth 50 points to the winner in the Road to the Kentucky Oaks. Conditions were excellent again with sunny skies, a fast track, firm turf, and temperatures in the mid 60's for the 6,078 fans in attendance. A field of 8 went to post with Under the Stars sent off as the even-money choice off her win in the Santa Ynez (G2) on January 8. In to challenge her included two undefeated horses at 3-1, Starlet Stakes (G1) winner Eda and Chandelier (G2) winner Ain't Easy, both making their 3-year-old debuts here. 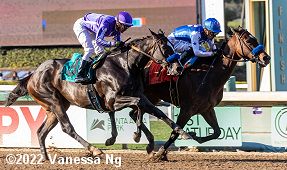 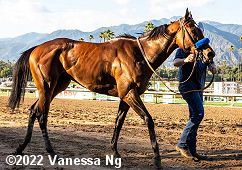 Left: Eda in the winner's circle. Winning trainer Bob Baffert said, "Both of my fillies were training really well and I was debating whether to run her, there was another spot. It was either run here or go to Sunland Park. I thought, well, we'll keep her here. She worked well coming into this and I'm happy both of my horses ran well…I don't know where I'm going to run them next. We'll definitely be in the Santa Anita Oaks (Grade II, April 9) with someone, but I don't know who yet."

Right: Eda heads back to the barn after the race. 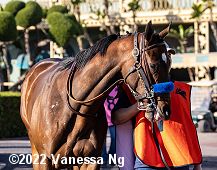 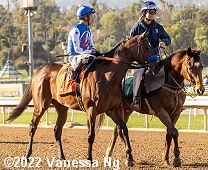 Left: Eda in the paddock before the race. Winning jockey Juan Hernandez said, "She was travelling really good. She was comfortable the whole race, she broke really sharp today and I got a good position. I was outside and when she broke like that, I just came to the rail and just let her run. I asked her around the quarter pole when I felt the inside horse and the outside horse (closing in), I told her it was time to go and she picked it up pretty good. When I asked her, she responded and took off again but I saw (stablemate Under the Stars) and (jockey Flavien Prat) almost got me." 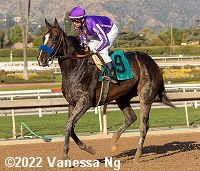 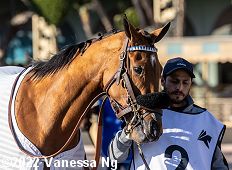 Left: Second place finisher and beaten favorite Under the Stars returns after the race. The Bob Baffert trainee improved her record to 2 wins, 1 second, and 2 thirds in 5 starts, earning $190,520 for owners Mrs. John Magnier, Michael Tabor, and Derrick Smith.

The fillies break from the gate for the Santa Ysabel. 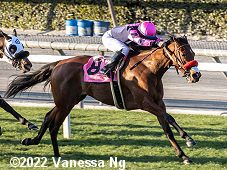 Closing out the race card on Sunday was the $100,000 China Doll Stakes featuring a field of eight three-year-old fillies going 1 mile on the turf. Lady of Shamrock Stakes runner-up Island of Love was sent off as the 9-5 favorite over 2-1 second choice Sterling Crest, a maiden winner at 5th asking last out, and 6-1 third choice Lucky Girl, winner of the Lady of Shamrock.

Jockey Abel Cedillo sent 7-1 Pammy's Ready to the lead first time by and she set fractions of 23.51, 47.87, and 1:12.02 while pressed by Island of Love and stalked by Sterling Crest. Entering the stretch Pammy's Ready tired as Lucky Girl, 7th early under Joe Bravo, swept to the front through 7f in 1:23.68. 24-1 An Agent Mistake put in a strong late rally from 5th but Lucky Girl held her off to win by 3/4 length in 1:36.02. It was another 1/2 length back to Sterling Crest third, and 1/2 more to favorite Island of Love fourth. 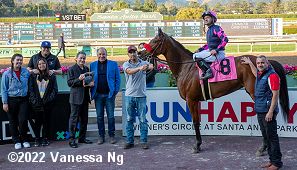 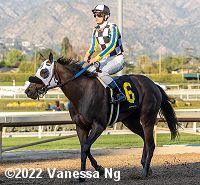 Left: Lucky Girl in the winner's circle. Winning trainer Richard Baltas said, "I was kind of surprised but not really. She was kind of shut off in the beginning and they weren't going that fast, but he made that early move. She kind of like made two moves, she made that move around the horses and then she took a breath and she rebroke again. Obviously, she's a really talented filly. It was kind of a funny race but it's always great when you win. There's so much for her here in California and you have the whole thing at Del Mar, the San Clemente, the Del Mar Oaks, so I think sometime between now and then we'll run her here then give her a little break before going to Del Mar."

Right: Fourth place finisher and beaten favorite Island of Love returns after the race. The Phil D'Amato trainee has a record of 2 wins, 1 second, and 0 thirds in 4 starts, earning $49,755 for owner R Unicorn Stable.