The feature race at Santa Anita on Sunday was the $100,000 Santa Ysabel Stakes (G3) for 3-year-old fillies going 1 1/16 miles on the main track worth 10 points to the winner in the Road to the Kentucky Oaks. Conditions were excellent again with partly cloudy skies, a fast track, and temperatures in the low 60's. Bob Baffert entered 3 of the 5 fillies to be drawn, but Mike McCarthy (who trains the other 2 entrants) scratched A Real Hero, leaving just 4 in the gate. Santa Ynez Stakes (G2) winner Kalypso was sent off as the 7-10 favorite off her second place finish in the Las Virgenes (G3). In to challenge her were 2-1 second choice Moraz, 3rd in the Las Virgenes, 3-1 third choice Beautiful Gift ff a maiden win, and 16-1 longest shot Heels Up, unraced since 3rd in the Desi Arnaz in November. Due to the short field there was no show pool.

Jockey Joel Rosario sent Kalypso to the lead first time by and she led through fractions of 23.95, 48.13, and 1:12.69 while pressed by Moraz and stalked by Beautiful Gift, with Heels Up trailing throughout. Into the stretch, Kalypso tried allowing Moraz to inherit a 1 1/2 length advantage through 1 mile in 1:38.21. Beautiful Gift came out for room and rallied to win by a head in 1:44.83. It was another 2 3/4 lengths back to favorite Kalypso third, and 23 more to Heels Up who was eased by Drayden Van Dyke and walked off. 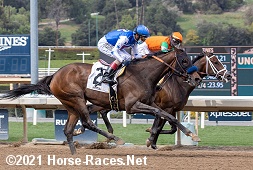 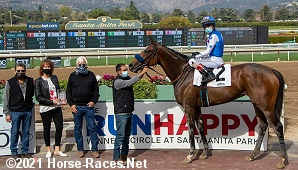 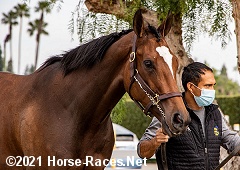 Left: Beautiful Gift in the winner's circle. Winning jockey John Velazquez said, "Bob's other horse (Kalypso) was beaten and Michael's (Moraz) was to the outside with Rispoli, I thought that was the horse to beat so I wanted to keep it as close as I could, so she didn't have too much to make up to the wire. I had to steady a little at the quarter pole and it took me a little more time to get her to the outside. She was full of run and I was trying to keep her from getting dirt in her face but when Rispoli (Umberto, aboard Moraz) pushed Joel (Rosario, aboard Kalypso) in, I had to take a hold of her. But she was able to overcome it."

Right: Beautiful Gift heads back to the barn after the race. Winning trainer Bob Baffert said, "I didn't think Johnny was going to get there and all of a sudden that mare kicked in and (Beautiful Gift) is really (good). We gave her some time she got real light on us. The further the better for her. I didn't think she got there until I saw the super slow mo but I'm just happy that they ran well." 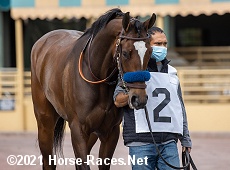 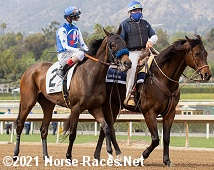 Left: Beautiful Gift in the paddock before the race. Velazquez added, "By the time I got her to the outside, I got her rolling and I was hoping she would get there before the wire and she did. I thought I (got it). I wasn't sure, don't get me wrong because Joel asked me galloping out, 'You think you go it?' I said, 'I think so man, but that was tight.' Thank you to Bob and the team for having me, hopefully I get more opportunities to come here."

Right: Beautiful Gift in the post parade. Baffert added, "It's nice to get these fillies, it's all I have for the Oaks, so it's fun." 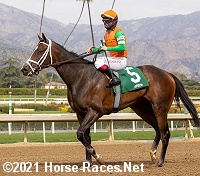 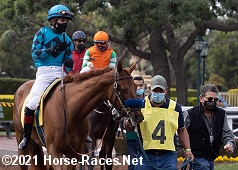 Right: Third place finisher and beaten favorite Kalypso in the paddock. Trainer Bob Baffert said, "Well (for) Kalypso the distance has always been a little suspect, but the other filly (Moraz) stayed right on top of her and didn't let her get away. (Last place finisher) Heels Up really can't go that far, we're gonna keep her one turn." 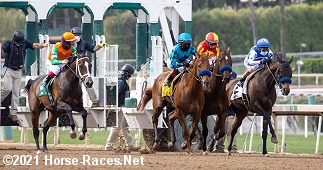 The fillies break from the gate for the Santa Ysabel.