The feature race on Saturday at Del Mar's summer meeting was the $200,000 Yellow Ribbon Handicap (G2) for older fillies and mares going 1 1/16 miles over the Jimmy Durante turf course. Conditions were excellent for August at the seaside oval with sunny skies and temperatures in the mid 70's for the 13,213 fans in attendance. Royal Heroine (G2) winner Going Global was sent off as the 7-10 favorite in the field of 7 off her third place finish in the Gamely Stakes (G1). In to challenge her included 6-1 second choice Avenue de France, winner of the Osunitas Stakes, and 13-2 third choice Flippant, winner of the Indiana General Assembly Distaff at Horseshoe Indianapolis.

Jockey Drayden Van Dyke sent 35-1 longest shot Javanica to the lead out of the infield chute through fractions of 23.88, 48.16, and 1:12.13 while pressed by 19-1 Burgoo Alley and stalked by 7-1 fourth choice Park Avenue. Entering the lane Going Global, 4th early, swept to the front 3 wide through 1 mile in 1:35.34. Kept to task by Umberto Rispoli, Going Global drew off to win by 3 lengths over Avenue de France in 1:41.18. It was another 2 lengths back to pacesetter Javanica third. 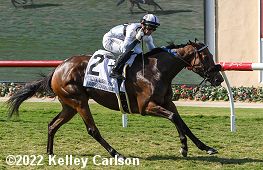 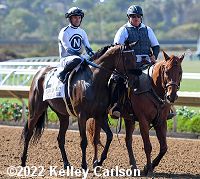 Left: Going Global in the winner's circle. Winning trainer Phil D'Amato said, "I thought Umberto had her perfectly placed from the get-go and it was just a matter of when he was going to press the button. When he did, she responded. All credit to Umberto and the filly and we'll move on to the (John C.) Mabee (Stakes on September 10)."

Right: Going Global in the post parade. Winning jockey Umberto Rispoli said, "When your ride one like her, you're feeling very well. I was excited to ride her today. When we came out of the turn, she gave me another gear. Then it was all over. She did it; I didn't do a thing." 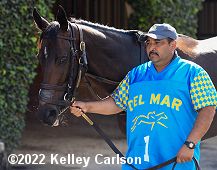 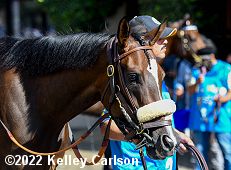 
The co-feature on Saturday was the $200,000 Sorrento Stakes (G2) for 2-year-old fillies sprinting 6 furlongs on the main track. Procrastination was sent off as the 7-10 favorite in the field of 6 off her debut win by 8 lengths at Los Alamitos on July 4. In to challenge her included 5-2 second choice Absolutely Zero, undefeated in 2 starts including the Fasig Tipton Futurity, and 9-2 third choice Satin Doll off her debut win at Del Mar on July 23.

Jockey Ricardo Gonzalez sent Procrastination to the lead out of the chute through fractions of 22.43 and 45.43 while pressed by 13-1 Dazzlingdominika and stalked by Absolutely Zero and 14-1 Vegas Magic. Turning for home Procrastination continued to lead through 5f in 58.29 but Vegas Magic and jockey Abel Cedillo moved out for room and rallied by to win by 1 1/4 lengths in 1:11.46. It was another 3 1/2 lengths back to Dazzlingdominika third. 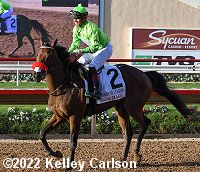 Left: Vegas Magic in the winner's circle. Leandro Mora, assistant to winning trainer Doug O'Neill said, "I expected the outside; this filly is so gutty. We were expecting her to give us a good race, she was my choice. Del Mar isn't the perfect place for some horses. It is like Saratoga: you might bring a nice horse to Saratoga and still might not win."

Right: Vegas Magic returns after the race. Winning jockey Abel Cedillo said, "I got a perfect trip. Soon as I broke with her she took me there and when I got to the stretch, when she switched leads, she just kept going. In the last eighth I'm like: 'Oh, I'm going to get that.' I would love to see her at one mile next time; she'd be tough." 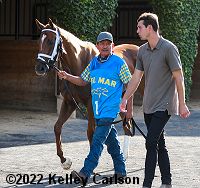 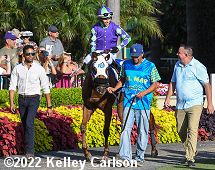 Left: Second place finisher and beaten favorite Procrastination in the paddock before the race. The Mike McCarthy trainee improved her record to 1 win and 1 second in 2 starts, earning $70,000 for owner Eclipse Thoroughbred Partners.

Right: Third place finisher Dazzlingdominika in the paddock. The Phil D'Amato trainee improved her record to 1 win, 0 seconds, and 1 third in 3 starts, earning $77,720 for owners Eric and Sharon Waller.