The feature race on Saturday at Del Mar's summer meeting was the $200,000 Yellow Ribbon Handicap (G2) for older fillies and mares going 1 1/16 miles over the Jimmy Durante turf course. Conditions were excellent for August at the seaside oval with sunny skies and temperatures in the high 60's.Royal Heroine Handicap (G2) runner-up Dogtag was sent off as the 3-1 favorite off a close second in the Possibly Perfect Stakes. In to challenge her included 7-2 second choice Princess Grace, winner of the Dr. James Penny Memorial (G3), and 15-4 third choice Maxim Rate, winner of the Gamely (G1).

Jockey Tiego Pereira sent 12-1 Raymundos Secret to the lead first time by and she set fractions of 23.06, 46.61, and 1:10.46 while pressed by 18-1 Brooke and stalked by 14-1 Laura's Light. Turning for home, the pacesetters tired as Princess Grace, 5th early under Kent Desormeaux, came through between horses to get to the lead through 1 mile in 1:34.89. Kept to task by Desormeaux, Princess Grace easily held off late-running favorite Dogtag to win by 1 1/4 lengths in 1:40.84. It was another 1 1/2 lengths back to Maxim Rate third. 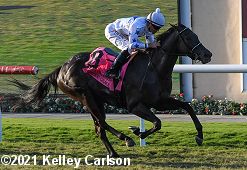 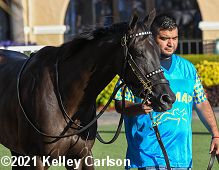 Left: Princess Grace in the winner's circle. Winning trainer Mike Stidham said, "This filly is tenacious and one of the most hard-trying fillies I've ever trained. I trained her mother and she was just like that – not quite as talented, but always digging in and trying to win every time out. This little filly has been at six different racetracks and she should be undefeated, the one loss was just unlucky. I don't know what's next, I haven't looked past this race. This was going to be her test to step up to another league and she obviously passed the test really well."

Right: Princess Grace in the paddock. Winning jockey Kent Desormeaux said, "Michael told me one thing before the race that I used to advantage today: He said 'She's brave.' When that hole opened turning for home, I sent her through and she went right on with it. She was a bit keen going into the first turn, but on the backside she was just all floppy ears and off the bit; taking it easy. I clucked to her at the three (eighths) and from there she just carried me home. Nice win on a nice filly." 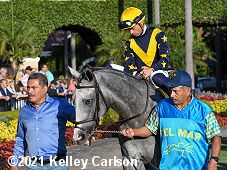 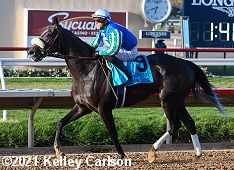 Left: Second place finisher and beaten favorite Dogtag in the paddock before the race. The Richard Mandella trainee improved her record to 4 wins, 4 seconds, and 2 thirds in 13 starts, earning $348,791 for owner-breeder LNJ Foxwoods.


The co-feature on Saturday was the $200,000 Best Pal Stakes (G2) for 2-year-olds sprinting 6 furlongs on the main track. Aquitania Arrival was sent off as the 2-1 favorite off his debut win at Churchill Downs on May 28. In to challenge him included 9-4 second choice Pappacap, a debut winner at Gulfstream on May 14, and 4-1 third choice Finneus, off his maiden win at second asking at Santa Anita.

9-2 fourth choice Bet On Mookie was quickest away through an opening quarter of 22.11 before 11-2 Thirsty Always poked a head in front through a half in 45.79. Entering the stretch, jockey Joe Bravo moved Pappacap 5 wide to sweep to the front through 5f in 58.61. Kept to task by Bravo, Pappacap drew off to win by 4 3/4 lengths over late-running Finneus in 1:11.66. It was another 1 1/2 lengths back to Bet On Mookie third. 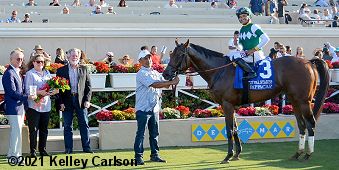 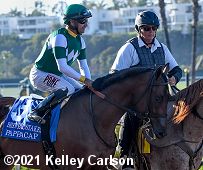 Left: Pappacap in the winner's circle. Allen Hardy-Zukowski, assistant to winning trainer Mark Casse said, "Joe gave him such a great ride coming out of the gate. He seemed loaded and when Joe asked in the stretch he responded. I was glad to see that, especially coming off a layoff. It was great."

Right: Pappacap in the post parade. Winning jockey Joe Bravo said, "I was glad to see how well he settled in behind those two up front. His race in Florida, he just was pure speed. You don't know if that's the way they like to go. But he showed another dimension today. Mark Casse sends them out ready." 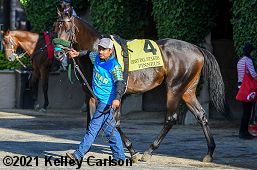 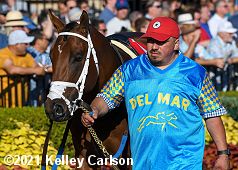 Left: Second place finisher Finneus in the paddock before the race. The Walther Solis trainee improved his record to 1 win, 1 second, and 1 third in 3 starts, earning $86,116 for owner-breeder Terry Lovingier and co-owners Nasser Mohammed Fasihuddin and Amanda Navarro.

Right: Third place finisher Bet On Mookie in the paddock. The Peter Miller trainee improved his record to 1 win, 1 second, and 1 third in 3 starts, earning $72,800 for owner Gary Barber. 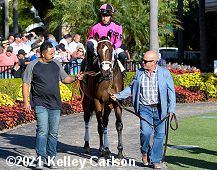 Fifth place finisher and beaten favorite Aquitania Arrival in the paddock. The Peter Miller trainee has a record of 1 win, 0 seconds, and 0 thirds in 2 starts, earning $33,520 for owner Peter Redekop B.C. Ltd.