The Labor Day feature at Del Mar is the $150,000 Yellow Ribbon Handicap (G2) for older fillies and mares going 1 1/16 miles over the Jimmy Durante turf course. Just 11,424 fans came out to the seaside oval under cloudy skies and temperatures in the low 80's. Solano Beach Handicap winner Halo Dolly was sent off as the 2-1 favorite in the field of 9 over 3-1 second choice Egg Drop, second in the Royal Heroine Mile (G2), and 11-2 third choice Closing Range, winner of the Osunitas last out.

19-1 A Jealous Woman battled for the lead with Egg Drop through quick opening fractions of 23.35, 46.76 and 1:10.21 while as many as 2 1/2 lengths in front of 7-1 fourth choice Quiet Oasis. Entering the stretch, A Jealous Woman tired and dropped from contention allowing Egg Drop to inherit a 1 length lead over 34-1 longest shot Appealing who moved up from 7th. Appealing moved up to even terms with Egg Drop in deep stretch but drifted out under the left handed whip of Brice Blanc, losing by a head in 1:40.50 over the firm course. It was another 1 1/2 lengths back to 8-1 My Gi Gi third. There was a stewards' inquiry into the stretch run due to the drifting of Appealing which had affected My Gi Gi's rally, but they ruled the trouble occurred too late to affect the finish order. 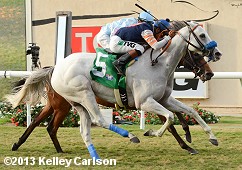 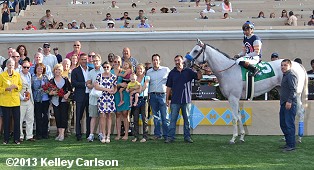 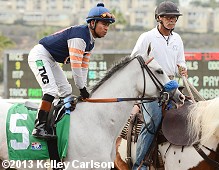 Left: Egg Drop in the winner's circle. Trainer Mike Mitchell said, "If they would have taken us down (through stewards' inquiry) it would have broken my heart. From the time I've had her I've been trying to win a stakes with her. And when we saw what she did on the grass (last two starts) we said, 'OK, no dirt, no synthetics just grass from here on out.' I think Martin rides her very well. She's not just a speed horse, she can sit off the pace and then make a run."

Right: Egg Drop in the post parade. Jockey Martin Garcia said, "I let her run free early; she was going so good. I had a lot of horse turning for home and she ran well. I didn't think I did anything (concerning the inquiry). I think it was more a case of (Appealing) coming out; not me. I think the stewards made a good decision. I never heard Garrett (Gomez aboard My Gi Gi) or his horse behind me." 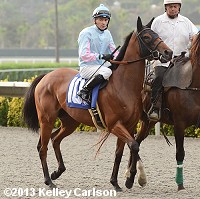 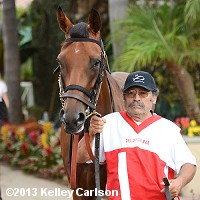 Left: Second place finisher Appealing in the post parade. Jockey Brice Blanc said, "I drifted out a little bit at the end, but not enough to make a difference. If anyone was at fault, it would have to be the winner. She came over and closed the gap on (My Gi Gi)."

Right: Third place finisher My Gi Gi in the paddock before the race. Jockey Garrett Gomez said, "Wow. That's all I can say. If I don't get stopped, I win the race." 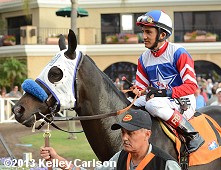 Fourth place finisher Halo Dolly in the paddock before the race. Jockey Rafael Bejarano said, "I was in a perfect position with her, right in behind the speed. But then I ran out of horse."

The first stakes race on Yellow Ribbon Handicap day was the $150,000 I'm Smokin Stakes for California-bred 2-year-olds sprinting 6 furlongs on Polytrack. Jockey Rafael Bejarano sent 5-2 second choice Gangnam Guy to the lead through fractions of 22.33 and 45.25 while stalked by 8-1 Better Bet. Gangnam Guy opened a 2 length lead at the 1/8 pole through 5 furlongs in 57.19, but 5-1 Jedi Mind Trick, fourth early, came out 3 wide into the lane and closed late to win by a neck in 1:09.76. It was another 1 1/2 length back to 9-1 Ashleyluvssugar third, while 9-10 favorite Aotearoa was fourth.

Winning jockey Victor Espinoza said, "When I ride for John (trainer Sadler), I have so much confidence. Since the start of the meet we've been lucky together and the way he trains horses, you know you're always on something 'live.' Today he didn't give me any special instructions; just said ride it as it comes up. My horse broke well and I was able to get a good position. The last part we had to run down (Gangnam Guy), but I thought we would. I knew I'd have something left for the final 1/16." 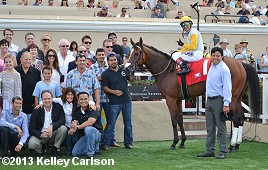 Winning jockey Rafael Bejarano said, "I could have put her anywhere I wanted to in the race. But I saw there was enough speed up front, so I was fine to sit back and wait. She just eased on up and I had lots of horse at all points. I remembered she'd run so well from the back last time, so I figured why not do it again. She ran well in that first one here (August 7), but she ran much, much better this time. She's very impressive."