On Sunday, Woodbine hosted its annual Yearling Sales Stakes day, stakes races restricted to Canadian-breds who went through Woodbine's sales ring as yearlings or weanlings. However unlike in past years, starting in 2021 the number of stakes offered was reduced to just 4, two for the juveniles and two for the 3-year-old divisions, all contested as Tapeta main track sprints. Conditions were typical for late August in Southern Ontario, with partly cloudy skies and a race time temperature of 28 C (82 F), feeling like 33 C (91 F) with the humidity. The 2022 Woodbine Yearling Sales take place this Wednesday, August 31 in the Woodbine sales pavilion.

The $200,000 Simcoe Stakes featured a field of 13 two-year-old males (after Cadfael was scratched at the gate by the veterinarian) sprinting 6 1/2 furlongs. Twin City was sent off as the 11-4 favorite off his second place debut finish, over 6-1 second choice Gran Spirited, a maiden winner at second asking last out, and 13-2 third choice Housebuilder, a maiden winner at third asking. 7-1 One More Brew was quickest out of the chute through an opening quarter of 22.87 before Housebuilder gained the lead through a half in 46.08. Housebuilder continued to lead to midstretch through 3/4 in 1:11.33 but tired late. Gran Spirited, fourth early under Declan Carroll, came out 3 wide for room and outfinished fast-closing favorite Twin City to win by a neck in 1:18.23. It was another 2 1/2 lengths back to 23-1 Wickedblackbullet third. 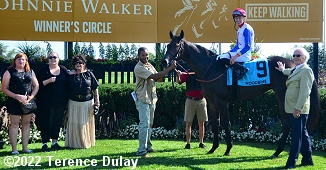 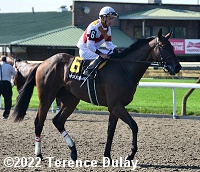 Left: Gran Spirited in the winner's circle. Winning jockey Declan Carroll said, "He’s very professional throughout the post parade and race. I kind of let him fall asleep on me probably a little earlier than he should have. He takes a bit of going. But that’s just greenness. He's going to improve a lot after that, and I look forward to him progressing throughout the year." Winning owner-breeder Rene Hunderup added, "Just stick it out. Keep breeding up, keep breeding better. Everyone had an opportunity to bid [at the sale], and I have to thank the underbidder. We were $1,000 apart and I would have let the horse go but thank God I didn’t."

Right: Second place finisher and beaten favorite Twin City returns after the race. He improved his record to 2 seconds in 2 starts, earning $46,489 for owner-trainer Stuart Simon and co-owners Brent, Russell, and Roy McLellan. 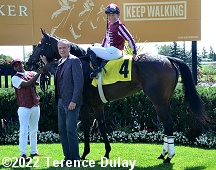 Kicking off the stakes quartet, the $100,000 Algoma Stakes featured a short field of 5 three-year-old fillies sprinting 7 furlongs. Baksheesh, winless since last year's Muskoka Stakes and unraced since December was sent off as the 1-2 favorite over 4-1 second choice Talk to Ya Later, 7th last out after her debut win, and 6-1 third choice Chroma off her debut win at Fort Erie on August 16. Jockey Kazushi Kimura sent Baksheesh to the lead out of the chute through fractions of 23.59 and 46.59 while pressed by 8-1 Unable and stalked by 9-1 longest shot Absolute Jewel. In the late Baksheesh continued to lead through 3/4 in 1:11.63 but Talk to Ya Later, last early under Emma-Jayne Wilson, rallied by inside the 1/8 pole to win going away by 3 1/2 lengths in 1:24.43. It was a long 7 1/2 lengths back from favorite Baksheesh to late-running Chroma third.

Winning jockey Emma-Jayne Wilson said, "When I saw them line up four across the track in front of me and I had a nice pretty position behind, I was pretty happy with that. She’s got a lovely, big old stride on her. She knows to quicken, and she knows to run on, and she did that today." Winning trainer Ian Black added, "She showed us [that she had talent] last fall. When we bought her, the way she was bred, we thought she’d need two turns, and she still might be better doing that." 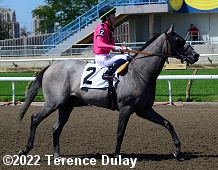 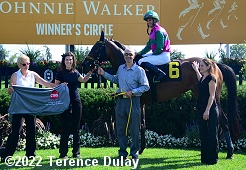 The $100,000 Elgin Stakes featured a field of 9 three-year-old males sprinting 7 furlongs. Allowance winner Giant Teddy was sent off as the 7-5 favorite over 9-2 second choice Where's Neal, winless since the Bull Page Stakes last September, and 19-4 third choice Full Screen, winless since breaking his maiden at Tampa Bay in February. 37-1 Big Warden was quickest away through an opening quarter of 23.65 before Full Screen took over on the far turn through a half in 46.22. Kept to task by jockey Jeffrey Alderson, Full Screen drew off through the lane to win by 4 3/4 lengths over favorite Giant Teddy in 1:23.25. It was another 2 1/4 lengths back to 5-1 fourth choice Dissectologist third.

Winning trainer Julie Belhumeur, celebrating her first Woodbine stakes win said, "A really good horse, he has a lot of talent. Unfortunately, very immature still. We are working on that. The last couple times on the turf didn’t work out too good, but the horse has been training well, and he’s been running well on the Tapeta, so we just figure we’ll keep him on it, and go with the flow." Winning jockey Jeffrey Alderson added, "It kind of worked out to our gameplan that we had set up. He doesn’t like being poorly placed and the last couple races we wanted to change things up, but he didn’t really enjoy it, so we went back to what works, and today was a day where it worked." 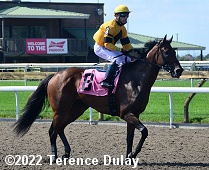 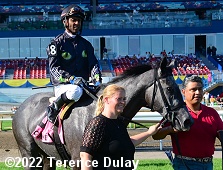 Anam Cara heads to the winner's circle. Winning jockey Patrick Husbands said, "She won a big race today. I got to the gate. I looked down. I always look down, and when I look down, I see the shoe halfway on. And only one more horse to go and I’m like, ‘Oh my God.’ So, you know, she blows the shoe, and she still showed us she was the best today." Winning owner-trainer Sarah Ritchie, celebrating her first stakes win, said, "First stakes win ever, actually. It's pretty exciting. She’s a really nice filly. And I liked her a lot right from the start. She hasn't disappointed yet."