Woodbine Racetrack in Toronto kicked off its 54th season of Thoroughbred racing on Friday April 2nd with a 10-race card. In contrast to past years' opening days, conditions were excellent, with partly sunny skies and temperatures in the mid 70's, unusually warm for Southern Ontario in early spring.

The feature race on the first of 167 racing days in 2010 was the $100,000 Debut Stakes for Ontario-sired older horses going 5 furlongs on the Polytrack. Drunken Love was sent off as the 11-4 favorite in the field of 11, unraced since winning an allowance event at Woodbine in December. In to challenge him included 7-2 second choice Dancingall Theway, winner of an allowance in February at Gulfstream Park, and 9-2 Grazettes Landing, seventh in a turf event at Tampa Bay in January.

Soon after the start, 30-1 Bold Nurse went to the lead and was challenged to his outside by 9-1 Paso Doble through an opening quarter in 21.99 over the fast synthetic surface. Entering the stretch, Bold Nurse tired from the early pace allowing Paso Doble to inherit the lead at the 3/16 pole through a half in 44.72, but Grazettes Landing, who was 5th early, was closing four-wide late. Grazettes Landing passed Paso Doble at the 1/16 pole and drove clear to win by a length over late-running 17-1 Don's Folly in 56.99 seconds. It was just a neck back to Paso Doble third. Favorite Drunken Love was close to the pace in third early but faded late to finish 6th. 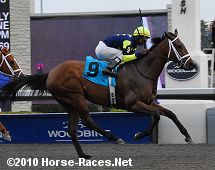 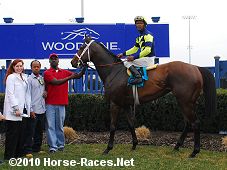 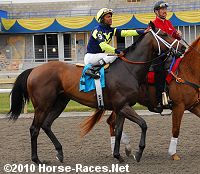 Left: Grazettes Landing in the winner's circle. The 9-2 third choice stalked the pace in 4th four wide early under jockey Patrick Husbands, closed into the stretch and passed the tiring pacesetters late t o win by a length. The running time of 56.99 seconds was just 0.58 seconds off the track record set by Dublin Lane on April 11, 2009. 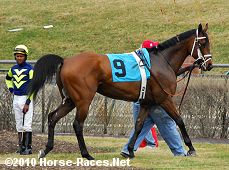 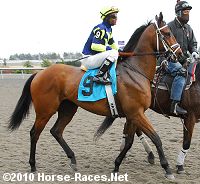 Left: Grazettes Landing in the paddock before the race. The Mark Casse-trained son of Paynes Bay improved his record to 6 wins, 5 seconds, and 2 thirds in 16 starts, earning $361,283 for owner-breeder Eugene Melnyk. This was his first stakes victory, after finishing third in the 2008 Overskate Stakes and then fourth in the 2009 Kennedy Road Stakes. 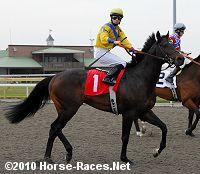 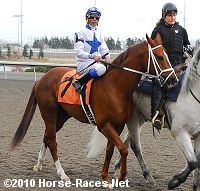 Left: Second place finisher Don's Folly returns after the race.The 17-1 shot raced near the back of the field early under new jockey Emma-Jayne Wilson, split horses on the turn and closed well to get second by a length. The Ian Black trainee improved his record to 3 wins, 4 seconds, and 0 thirds in 9 starts, earning $239,604 for owner Don A. Cole.

Right: Third place finisher Paso Doble in the post parade. The 9-1 shot forced the pace in second under new jockey Emile Ramsammy, took the lead briefly at the 1/8 pole but failed to hold off the eventual winner late. The Sid Attard trainee improved his record to 3 wins, 3 seconds, and 2 third in 13 starts, earning $194,824 for owner Terry Hamilton.


The season opener was a $37,900 maiden special weight for 3-year-old fillies going 4 1/3 furlongs. 3-5 favorite Neverrguwithrichie stalked the pace set by 9-1 One Spark down the backstretch, took over at the 1/4 pole, and easily held off 2-1 second choice Adreamandaprayer by a length. It was another 3/4 length back to 6-1 third choice At Risk third. The running time was 51.56 seconds.

Her jockey Jesus Castanon said, "She had a bit of a slow break, but she got up there and did it all herself. She was pretty sharp. When I kicked her in, she was really strong." Asked about the Polytrack surface, he added, "It's lovely, just lovely. I love riding at this racetrack."