The first Saturday in October at Belmont Park features the first of several east coast preps for the Breeders' Cup World Championships, to be run at Del Mar in 5 weeks time. Conditions were typical for Long Island with partly cloudy skies and temperatures in the mid 70's, the main track fast and both turf courses firm.

The $500,000 Woodward Stakes features top older horses going 1 1/8 miles around one turn in their final prep for the Classic, however this is not a Breeders' Cup Challenge Series event. Stephen Foster (G2) winner Maxfield was sent off as the 9-10 favorite in the field of 6 off his 2nd place finish in the Whitney (G1) at Saratoga. In to challenge him included 11-4 second choice Art Collector, winner of the Charles Town Classic (G2), and 4-1 third choice Code of Honor, winner of the Philip Iselin (G3) at Monmouth Park. 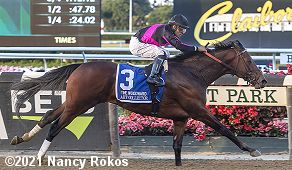 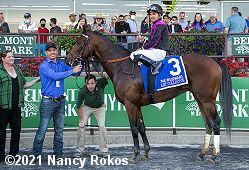 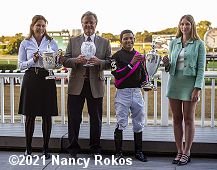 Left: Art Collector in the winner's circle. Winning trainer Bill Mott said, "Nice race, strong race. He's put three of them together. He's a nice horse. He's just done enough to beat his company. Each one probably got a little tougher. It was tougher today, but he handled it. He was in great shape. He had the winter off and he was a fresh horse. They ran him at Churchill once going 7/8. It was an odd race. He didn't have the greatest trip. When he came to me, he had a race under his belt and was ready to go. He's done well since we had him. With racing, I think he's gotten stronger and better and today is the result."

Right: The trophy presentation for the Woodward. Mott added, "I'm not afraid (to run in the Classic). I'll talk to [owner] Mr. [Bruce] Lunsford. He makes the final decision, but I don't know what we have to lose. I'd run him 1 1/4. A mile and an eighth hasn't been a problem for him, so why would I cut him back?" 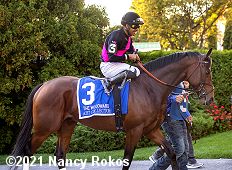 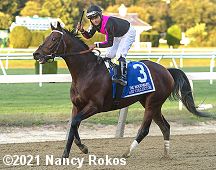 Left: Art Collector heads out of the paddock.

Right: Art Collector returns after the race. Winning jockey Luis Saez said, "It was a wonderful race. I had a lot of confidence in my horse. He always tries so hard. He always comes with a run and finishes with run and today he ran his race. We expected to be on the lead. He broke so well and he was able to control the pace. That was an exciting race.  I felt pretty good (turning for home), I felt like I had a lot of power and a lot of horse and when I asked, he took off." 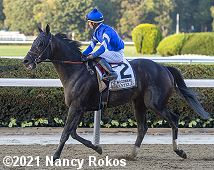 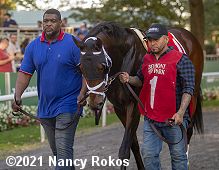 Left: Second place finisher and beaten favorite Maxfield returns after the race. Trainer Brendan Walsh said, "I don't know that we had a lot of excuses. We had a good spot even if it was down inside a little bit. We ran a good race to be second. This horse doesn't let us down ever. I don't think [the blinkers] made a whole lot of a difference. They definitely weren't a negative in any way. Jose [Ortiz] said he ran a good race and found the gears he wanted him to find, but he just got outrun by a horse that was better on the day. He still hasn't done anything wrong. Every race is different and our day will come, too. I can't see why not (go to the Classic)."

Right: Third place finisher Dr Post in the paddock. Jockey Irad Ortiz Jr. said, "He ran great. He did everything right, he just got beat by two nice horses."

The $500,000 Champagne Stakes (G1) features 2-year-olds going 1 mile around 1 turn of the main track looking for automatic entry into the Breeders' Cup Juvenile. Jack Christopher was sent off as the 8-5 favorite in the field of 6 off his debut win at Saratoga on August 28. In to challenge him included 5-2 second choice Wit, winner of the Sanford (G3) before finishing second in the Hopeful (G1), and 3-1 third choice Gunite, winner of the Hopeful after finishing second in the Saratoga Special (G2).

Jockey Ricardo Santana Jr. sent Gunite to the lead out of the chute through fractions of 23.57 and 46.49 while pressed by Jack Christopher and stalked by 52-1 longest shot Kavod. On the far turn jockey Jose Ortiz sent Jack Christopher to take over the lead through 3/4 in 1:11.15, and he quickly opened up a 5 1/2 length advantage midstretch through 7f in 1:24.04. 12-1 Commandperformance rallied 4 wide from 5th but Jack Christopher cruised late to win by 2 3/4 lengths in 1:37.31. It was a long 7 lengths back to Wit third. 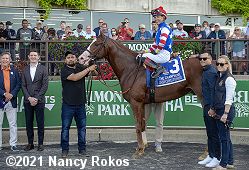 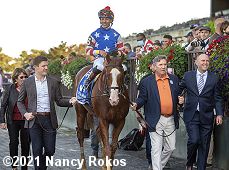 Left: Jack Christopher in the winner's circle. Winning trainer Chad Brown said, "We knew we had speed and Jose and I agreed to not take that away from him. We just wanted to break out of there and get a good spot. Jose had a feeling that running first time in blinkers he would do something to try and get involved and he was right. A very quick decision he made - which was the right one - was to slip out to the outside right away and I think, from there, I felt super confident that we would get there with no excuse and he showed up." 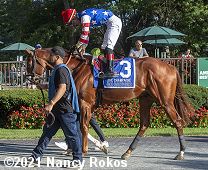 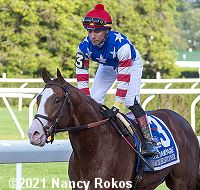 Left: Jack Christopher in the paddock before the race.

Right: Jack Christopher returns after the race. Winning jockey Jose Ortiz said, "I broke well and I knew I cleared the 2 [My Prankster]. I seen 4 [Kavod] and 5 [Gunite] going, so I took him back and put him in the clear. He gave me a great kick. When he passed the five-horse, he stopped running a little bit. He didn't give me everything he had, I believe. I think first time going a mile this will help him for that next step." 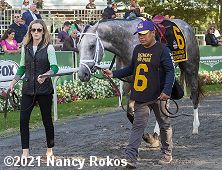 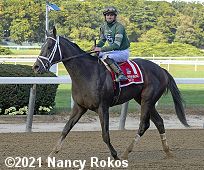 Left: Second place finisher Commandperformance in the paddock before the race. Jockey Tyler Gaffalione said, "The horse put himself in a great spot. I had a great position going down the backside. I was able to see everybody in front of me. Going around the turn, I started to get him into gear and he kept responding. His gallop out was great. He seems like he'll love the distance going forward."

Right: Third place finisher Wit returns after the race. Byron Hughes, assistant to trainer Todd Pletcher said, "It was his typical start. I don't think he's ever going to be that fast out of the gate. Irad [Ortiz, Jr.] got him into a good rhythm but he had a little trouble there on the turn. He made up some ground but just couldn't get to the winner."


The $200,000 Belmont Turf Sprint Invitational (G3) featured a field of 7 older horses sprinting 6 furlongs on the inner turf course. Arrest Me Red was sent off as the 9-4 favorite off his win in the Mahony Stakes at Saratoga. In to challenge him included 3-1 second choice Backtohisrootsm, 2nd in the Lucky Coin Stakes, and 7-2 third choice Therapist, 2nd in the West Point Stakes.

Jockey Irad Ortiz Jr. sent Arrest Me Red to the lead down the backstretch through fractions of 22.33 and 45.75 while pressed by 24-1 longest shot Guildsman and stalked by 6-1 Pulsate. Turning for home Arrest Me Red continued to lead through 5f in 56.80, and easily held off Pulsate to win by a length in 1:07.86. It was another 3/4 length back to 11-2 Chewing Gum third. 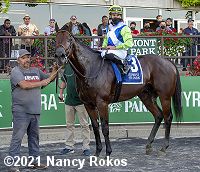 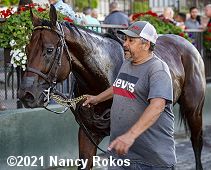 Left: Arrest Me Red in the winner's circle. Winning jockey Irad Ortiz Jr. said, "He relaxed so well. He did everything right, honestly. He broke well from the gate, and I just stayed quiet and relaxed. I was on the front, so I just was biding my time to go. He was travelling perfectly and when I asked him to run, he responded really well. [Trainer] Wesley [Ward] did a great job with him. He's a great guy to ride for."

Right: Arrest Me Red heads back to the barn after the race. 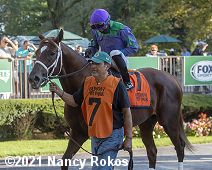 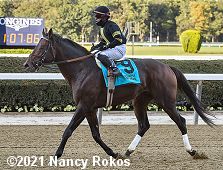 Left: Second place finisher Pulsate returns after the race. Jockey Manny Franco said, "He was second best. I had a good trip. No excuses. The winner just kept going."

Right: Third place finisher Chewing Gum in the paddock before the race. Jockey Eric Cancel said, "I rode him once before and he likes to sit and make one run. That was the same scenario today, so I just tried to keep him in the clear and keep him comfortable and just make one run from the quarter-pole down."


Kicking off the Saturday stakes quartet was the $200,000 Miss Grillo Stakes (G2) featuring a field of 6 two-year-old fillies going 1 1/16 miles on the inner turf . McKulick was sent off as the 2-5 favorite off her debut win over the Saratoga inner course on August 8. In to challenge her included 7-2 second choice Kinchen, a close second in her debut on August 29, and 8-1 third choice Hail To, a maiden winner at second asking when defeating Kinchen. 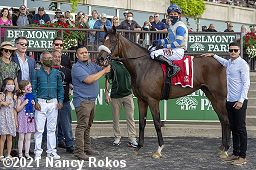 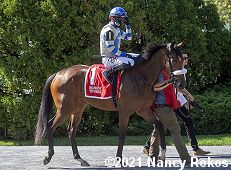 Left: Sail in the winner's circle. Winning trainer Leah Gyarmati said, "We had the one-hole and she looked in the paddock like she was pretty sharp. We did go to the lead last time, but it was by default; there were slow fractions and nobody wanted to go. I'm glad Junior did things just as he did. He let her break and she broke really well and [Charlee O] went which was perfect because it got her to settle. I saw the fractions. I saw how she was looking and acting. Obviously, she hasn't gone long so I wasn't sure, but I felt very good about my position. I'll have to talk to Jeff [Treadway, owner-breeder], but I'm sure he is game and wants to go (to the Breeders' Cup Juvenile Fillies Turf)."

Right: Sail heads out of the paddock. Winning jockey Junior Alvarado said, "I knew I was going to have horse turning for home, I was just wondering how much the other horses would be coming after me. When I turned for home and asked her, I knew they were going to be in trouble because she was coming home very quickly. I always thought she wouldn't have a problem stretching out. I was hoping she wouldn't get too sharp at the beginning. I knew she would get the distance for sure. She was pretty fit the first time I rode her, but mentally I could see she needs to mature a little more, but today we got that. Just being mature and fit at the same time helped us win the race today." 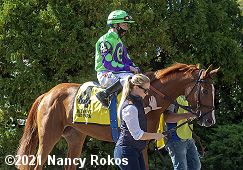 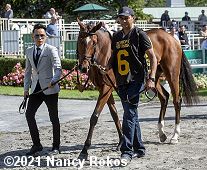 Left: Second place finisher Kinchen in the paddock. Jockey Tyler Gaffalione said, "The lack of speed definitely took its toll. There wasn't much pace in the race today. I didn't want to take my filly out of her element. I had to let her run her race. She's still inexperienced but learning with each race. It was definitely a huge improvement today and I expect nothing but for her to get better down the road."

Right: Third place and beaten favorite finisher McKulick in the paddock. The Chad Brown trainee improved her record to 1 win and 1 third in 2 starts, earning $79,000 for owner Klaravich Stables. 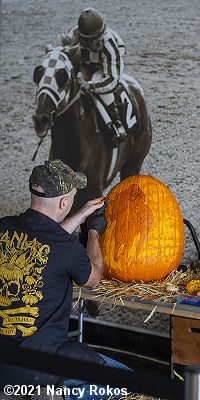