The final Saturday of the 2013 Saratoga meeting featured three graded stakes, contested under dark overcast skies and temperatures in the high 70's. 20,068 fans braved heavy rain through the day which left a sloppy main track and yielding turf courses.

The highlight race on closing weekend is the $750,000 Woodward Stakes (G1). It is the major local prep for the Jockey Club Gold Cup (G1) and ultimately the Breeders' Cup Classic (G1), for older horses going 1 1/8 miles over the main track. A field of just 5 (after Fort Larned and Mucho Macho Man scratched) went to post in this 1 1/8 mile feature, with Paynter sent off as the 3-2 choice off his close second in the San Diego Handicap (G2) at Del Mar. In to challenge him included 5-2 second choice Flat Out, winner of the Suburban Handicap (G2) last out, and 7-2 third choice Successful Dan, second in the Whitney Handicap (G1).

Jockey John Velazquez sent 7-1 longest shot Alpha to the front immediately and he set fractions of 24.46, 48.20, and 1:11.57 while 2 lengths in front of Paynter and Flat Out stalking him second and third. Entering the stretch, Paynter, who had hit the gate at the start, tired badly as Alpha continued to lead through a mile in 1:36.19. Flat Out closed the gap on Alpha through the final furlong but Alpha held him off by a head to win gate-to-wire in 1:49.28 over the sloppy, sealed main track. It was a long 6 3/4 lengths back to Successful Dan third, 1/2 a length to 9-2 Ron the Greek fourth, and 5 1/4 back to favored Paynter last.

Also on the card were the Forego Stakes (G1) won by Strapping Groom and the Bernard Baruch Handicap (G2) won by Silver Max. 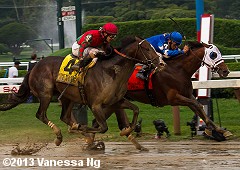 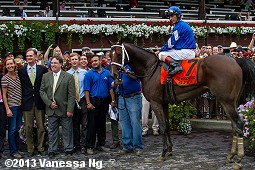 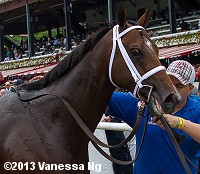 Left: Alpha in the winner's circle. Trainer Kiaran McLaughlin said, "I think the start was a big, big difference. Maybe he wasn't as fit as I thought he was the last two races. We had him dead-ready and fit today. Johnny did a great job breaking well because he's had his gate issues. The stretch run was more nerve-wracking than the Travers, because we were there, trying to hold him off. But it was great. When Flat Out came to us, Johnny said he kind of looked at the tire tracks late, but we're here in the winner's circle, so it was a great win, one of our biggest, probably. I told Johnny if he breaks well and he can throw mud on the rest of them, please do. He agreed with me. He's a great rider and you hope things go like planned, and they did. So it's just fabulous. I wish Saratoga was open a little longer for him because he loves it here. He's a nice horse, a really neat horse to be around. I'm just happy for the whole team."

Right: Alpha heads back to the barn after the race. 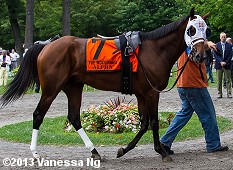 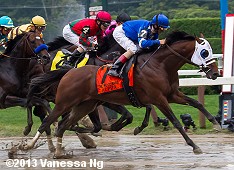 Left: Alpha in the paddock before the race. Jockey John Velazquez said, "Once we got to the first turn where I wanted to be, he sat in the four path. We waited until the 1/4 pole when the other horse came to me. Once that other horse didn't pass me at the 3/16 pole, I knew my horse was going to put up a good fight. Obviously, he did and kicked ahead. My horse kept fighting and I made sure to keep him busy. He really didn't slow down. When (Flat Out) came close to me again, my horse put in another gear going to the wire. When he saw the tire tracks where the gate was, he pricked his ears and slowed down a little too much for my comfort."

Right: Alpha on the lead shortly after the start. 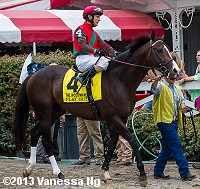 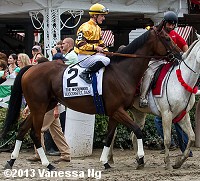 Left: Second place finisher Flat Out heads out to the track before the race. Jockey Junior Alvarado said, "He ran his race and he put everything he had and we just didn't get lucky at the wire. Alpha was strong and ran a great race, too. The only thing, I was expecting Paynter to go with him, but Alpha made the lead easy and I had to start going after him a little bit at the 3/8 pole, and that was a long move for him."

Right: Third place finisher Successful Dan heads out to the track before the race. The 7-2 third choice raced 4th 4 lengths back early under jockey Julien Leparoux, and passed the tiring pacesetter to get third beaten 6 3/4 lengths. The Charles LoPresti trainee improved his record to 8 wins, 3 seconds, and 2 thirds in 15 starts, earning $998,154 for owner-breeder Morton Fink. 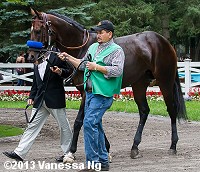 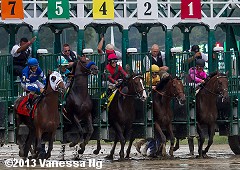 Left: Last place finisher and beaten favorite Paynter in the paddock. Jockey Rafael Bejarano said, "He broke a little slow, but I found my position right away. We had a good trip, but I was out of horse by the 1/2 mile. I think he didn't feel comfortable on the surface. He never felt comfortable."

Right: The start of the Woodward where Paynter reared and hit the side of the gate.

Immediately before the Woodward, a field of 8 older horses (7 betting interests) sprinted 7 furlongs over the main track in the $500,000 Forego Stakes (G1). The two-horse Zayat Stables entry of True North Handicap (G2) winner Fast Bullet and Alfred Vanderbilt Handicap (G1) winner Justin Phillip was sent off as the 3-4 choice over 3-1 Sage Valley, winner of the James Marvin (G3), and 5-1 Lea, third in the Fourstardave (G2).

Jockey Junior Alvarado sent 15-1 Strapping Groom to the lead exiting the chute and he set fractions of 22.92 and 45.22 over the sloppy track while pressed by Fast Bullet and Justin Phillip. Entering the stretch, Strapping Groom kicked away from the field, opening up a 2 1/2 length advantage over Justin Phillip through 3/4 in 1:09.16. 8-1 Jackson Bend, 6th early, rallied late along the rail but Strapping Groom held him off by 1/2 a length for the front-running win in 1:22.27. 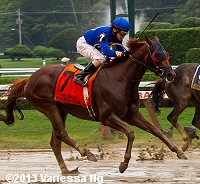 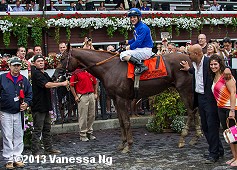 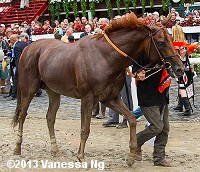 Left: Strapping Groom in the winner's circle. Trainer David Jacobsen said, "When you claim a horse, you always have high expectations. I always liked him going back to when he was laid up. Even back then I told my assistant, Frank LaBoccetta, I thought he was fast enough to win a graded stakes. Frank reminded me of that 10 minutes ago. Carl Domino did an outstanding job bringing him back, and he was in great shape when I claimed him. We were fortunate to have an outside post. The horse likes to be on the lead, and Junior's instructions were to get the lead if he could. After he put away Fast Bullet, I was pretty confident he was going to win."

Right: Strapping Groom heads back to the barn after the race. Jockey Junior Alvarado said, "He broke pretty good. I tried to make him comfortable the whole way. He handled the track pretty good. Turning for home, I knew I would have something left. When I asked him, he made a great run. I felt (Jackson Bend) coming through along the rail, but I knew I was close enough to the wire. I knew it was my race already." 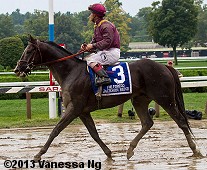 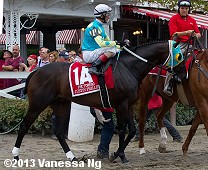 Left: Second place finisher Jackson Bend returns after the race. Jockey Javier Castellano said, "He gave me his best effort. I'm very satisfied with the way he did it. Unfortunately we got second place. I think he ran huge. I had a beautiful trip. I was right where I wanted to be. I wish that the pace was a little quicker - 22.45 [seconds] for those kind of horses, really good horses, it's kind of easy for them. If I had gotten 21.44-type fractions I think I would have won the race."

Kicking off the stakes trio was the $250,000 Bernard Baruch Handicap (G2), a 1 1/16 mile Mellon turf test for older horses. Silver Max was sent off as the 9-10 favorite in the field of 5 off his win in the Oceanport (G3) at Monmouth, over 3-1 second choice Turralure, second in an allowance last out, and 4-1 third choice Tetradrachm, an allowance winner last out and making his stakes debut here.

Jockey Robby Albarado sent Silver Max to the lead first time by and he set fractions of 23.88, 47.34, and 1:11.12 over the yielding going while stalked by Tetradrachm and 10-1 Paris Vegas. At the top of the lane, Silver Max pulled away from the field, opening up by 2 lengths at the 1/8 pole, and holding that lead over Paris Vegas to the winning post in a time of 1:42.31. It was a long 6 1/4 lengths back to Tetradrachm third. 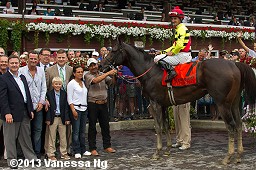 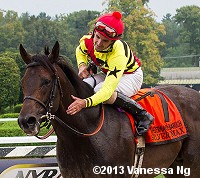 Left: Silver Max in the winner's circle. Trainer Dale Romans said, "Last year, I might have overdone it with him. I ran him a lot of times in those 3-year-old races. He was a little tired at the end of the year. He's coming into the summer and fall a lot more fresh, and I think by the end of the year he could be one of the best turf horses around. Every time something happens, you're concerned, especially going into a big race like this. If there's anything to worry about, you will worry about it. But he handled (soft turf) last year in Virginia. They made him work a lot more today than I thought he would. If you had told me he was going to go that fast for the first 1/2, I'd say he'd be 15 lengths in front. They made him run for it."

Right: Silver Max returns after the race. Jockey Robby Albarado said, "It's no secret what his strategy is: He just pops right out of there and goes right to the front. I try to be a quiet and patient passenger on him and let him do all the work. They came to me a little earlier than I anticipated, at about the 1/2 mile pole. But he's just got such a high cruising speed and he holds it. He held off a couple nice horses. He gets on his streaks, and I think his last couple of races he's been back to himself." 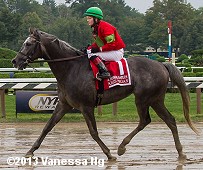 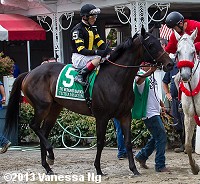 Left: Second place finisher Paris Vegas returns after the race. Jockey Rosie Napravnik said, "Turning for home, I thought we had a shot. My horse is a kind of a grinder. You know he doesn't have a huge kick, but he ran very well."