The final Saturday of the 2012 Saratoga meeting featured three graded stakes, contested under sunny skies and temperatures in the low 80's. The highlight race on closing weekend is the $750,000 Woodward Stakes (G1). It is the major local prep for the Jockey Club Gold Cup (G1) and ultimately the Breeders' Cup Classic (G1), for older horses going 1 1/8 miles over the main track. A field of 7 went to post in this 1 1/8 mile feature, with Mucho Macho Man sent off as the 4-5 favorite off his win in the Suburban Handicap (G2) after finishing third in the Alysheba (G2). In to challenge him included 7-2 second choice To Honor and Serve off his fourth place finish in the Suburban, and 9-2 third choice Stay Thirsty, fifth in the Suburban last out.

Also on the card were the Forego Stakes (G1) won by Emcee and the Bernard Baruch Handicap (G2) won by Dominus. 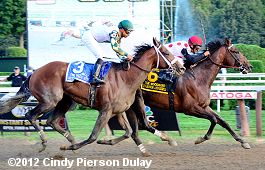 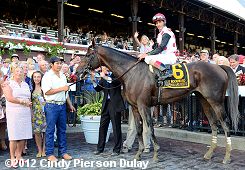 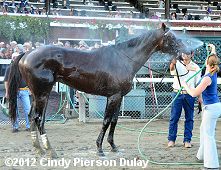 Left: To Honor and Serve in the winner's circle. Trainer Bill Mott said, "He's competed well at 2, 3 and now 4. He's established himself as a top handicap horse, and hopefully he'll go on and finish the year out strong and go on to be a good sire. Hopefully, the breeders will give him a big chance with good mares and he'll do well. He's been training well, he's a sound horse and there's no reason for him not to."

Right: To Honor and Serve gets hosed off after the race. Winning owner Charlotte Weber said, "I'm thrilled. I think he's a marvelous horse. I just signed the deal to put him to stud with Mr. (Antony) Beck (of Gainesway Farm). It is a marriage made in heaven. He's one of the best-looking horses in his group, and I think he's performed very well. He'll be retired after the Breeders' Cup, I'm quite sure." 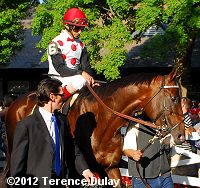 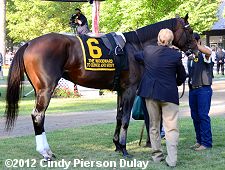 To Honor and Serve in the paddock before the race. Mott added, "(To Honor and Serve and Mucho Macho Man) have raced against each other since they were 2-year-olds. We've traded win positions and I figured it was our turn. You always wonder how he's going to do in a dogfight, and that horse ran up to his neck and he held him." 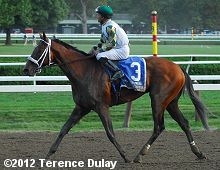 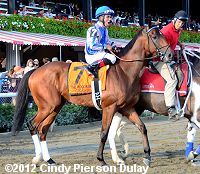 Left: Second place finisher and beaten favorite Mucho Macho Man returns after the race. Trainer Kathy Ritvo said, "The break cost him the race. I just didn't want to break that bad and give the other horses a couple of lengths. He ran a good race. I was hoping he was going to catch (To Honor and Serve), but he's a tough horse to catch."

Right: Third place finisher Cease heads out to the track before the race. Trainer Al Stall Jr. said, "He ran a good race. Joel (Rosario) said when he wheeled him out in the middle of the racetrack, he just got lost. We've noticed that before. Nobody did anything wrong, that was the place to be, but he just got out in the middle of the racetrack and kind of wandered a little bit. Joel said he had much more run on his mind when he was in the mix."

Immediately before the Woodward, a field of 7 older horses sprinted 7 furlongs over the main track in the $500,000 Forego Stakes (G1). Emcee was sent off as the 3-2 favorite off a close third place finish in the Alfred G. Vanderbilt Handicap (G1). In to challenge him included 5-2 second choice Jackson Bend, fourth in the James Marvin (G3) last out, and 3-1 third choice Pacific Ocean, winner of the James Marvin.

Jockey Joel Rosario sent Pacific Ocean to the lead exiting the chute and he set fractions of 22.64 and 45.38 down the backstretch while pressed by Emcee a length behind. Entering the stretch Pacific Ocean tired as 9-1 Jersey Town gained a short lead through 3/4 in 1:08.81, but Emcee powered ahead in the final furlong to win going away by 4 1/2 lengths over 18-1 Hamazing Destiny in 1:21.00 over the fast main track. It was just a neck back to Jersey Town third. 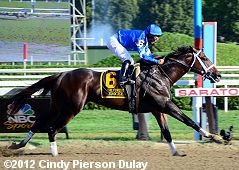 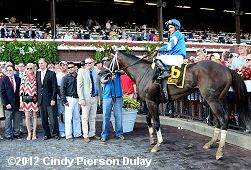 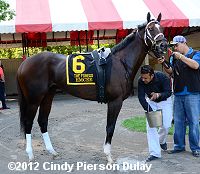 Left: Emcee in the winner's circle. Winning trainer Kiaran McLaughlin said, "We felt earlier this morning that Shackleford might be there ahead of us with (Pacific Ocean) and we would lay third, but we laid second. It helped that we don't have to run against (Shackleford); he's a very nice horse. I'm sorry that they had to scratch him. When (Jersey Town) cut up the rail, I was a little nervous, but Alan hadn't asked our horse yet. It was a very impressive race."

Right: Emcee in the paddock before the race. Jockey Alan Garcia said, "My horse broke good and was right in the game. Turning for home, when I asked him, he ran and did it very well. I was very confident. It was a great post today, better than last time. All I wanted was for him to break good and take it from there." Jimmy Bell representing winning owner Godolphin Racing added, "He's a deserving Grade 1 winner. It's nice to be on the outside this time; he was probably a little unlucky in his last race. He exploded home. He was primed; Kiaran and the team did a super job, and he delivered on the right day." 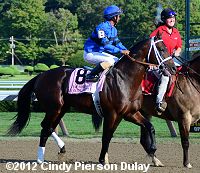 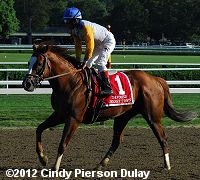 Left: Second place finisher Hamazing Destiny in the post parade. Trainer D. Wayne Lukas said, "I cannot take anything away from the winner. I don't know, but my horse could be a miler. I think we may try him in the Kelso. He's closing on all of these horses pretty good. If you throw the wet-track race (Alfred G. Vanderbilt), he runs pretty good. He doesn't like an off track."

Right: Third place finisher Jersey Town returns after the race. Jockey Edgar Prado said, "Beautiful trip, he broke good, settled right behind the speed and followed them around beautiful. When he took (the lead) I thought he was going to be home free, but unfortunately the other horse had something left."

Kicking off the stakes trio was the $250,000 Bernard Baruch Handicap (G2), a 1 1/16 mile Mellon turf test for older horses. Monmouth Stakes (G2) winner Data Link was sent off as the 11-10 favorite in the field of 6 over 9-5 second choice Dominus, making his turf debut after winning an allowance last out, and 7-1 third choice Guys Reward, fourth in the Fourstardave (G2) after winnng the Firecracker Handicap (G2). 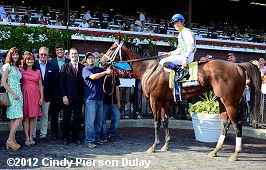 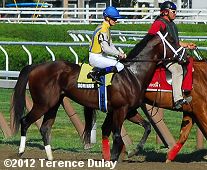 Left: Dominus in the winner's circle. Winning trainer Todd Pletcher said, "We kind of anticipated he would be on the lead. The fractions were comfortable and he relaxed nicely. Things went just like we hoped. I would have been disappointed if he'd gotten beat after the (48 half). There are tons of options. He's still obviously a very nice dirt horse. It puts us in a position to pursue a lot of options."

Right: Dominus heads onto the turf course. Winning jockey Julien Leparoux said, "He was the only speed in the race, he just galloped easy, broke easy, and it was pretty easy for him. It was very nice for me at the end. He's a nice horse. First time on the grass, he was relaxed. He ran very big today. He's a big horse. He's got this long stride, but when you ask him he's pretty light on himself, so hopefully we'll keep going like this and win more big ones." 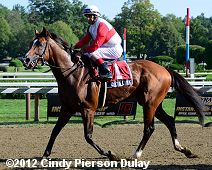 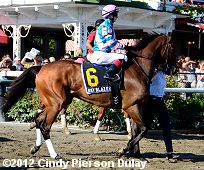 Left: Second place finisher and beaten favorite Data Link returns after the race. The 11-10 favorite stalked the pace in third under jockey John Velazquez, then gained late to get second beaten 1 1/4 lengths. The Shug McGaughey trainee improved his record to 6 wins, 1 second, and 1 third in 13 starts, earning $501,335 for owner-breeder Stuart Janney III.

Right: Third place finisher Sky Blazer heads out for the post parade. The 8-1 fourth choice was unhurried in last under jockey Rosie Napravnik, then closed in the final 1/4 mile to get third beaten 2 1/2 lengths. The Barclay Tagg trainee improved his record to 4 wins 0 seconds, and 2 thirds in 12 starts, earning $185,664 for owners Joyce Young and Gerald McManis.