The major New York prep race for the Triple Crown is the $750,000 Wood Memorial Stakes (G2) presented by Resorts World Casino, contested at 1 1/8 miles, one complete circuit of the Aqueduct main track, worth 100 points to the winner as part of the Kentucky Derby Championship Series. Conditions were typical for early April at the Long Island oval near Kennedy Airport, with cloudy skies and temperatures in the mid 50's. The main track was rated fast but morning rain downgraded the turf to good. Morello was sent off as the 9-5 favorite in the field of 8, undefeated in 3 starts including the Jimmy Winkfield and the Gotham Stakes (G3). In to challenge him included 2-1 second choice Mo Donegal, winner of the Remsen (G2) in December but 3rd in the Holy Bull (G3) at Gulfstream, and 9-4 third choice Early Voting, winner of the Withers (G3).

Jockey Jose Ortiz sent Early Voting to the lead first time by and he set fractions of 23.86, 47.75, and 1:11.59 while pressed by 50-1 longest shot A.P.'s Secret and stalked by 7-1 fourth choice Barese. Turning for home Early Voting opened a 2 length lead through 1 mile in 1:35.63, but Mo Donegal, last early under Joel Rosario while saving ground on both turns came out for room and rallied to get up by a neck in 1:47.96. It was another 3 1/2 lengths back to 17-1 Skippylongstocking third, while favorite Morello hit the gate at the break and failed to rally finishing 6th beaten 21 1/2 lengths. 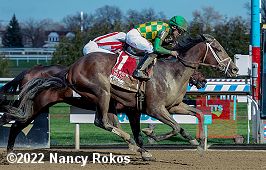 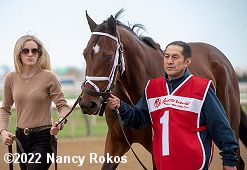 Left: Mo Donegal in the winner's circle. Winning trainer Todd Pletcher said, "I thought he ran a great race. It didn't really unfold the way we thought it would. When Steve's horse (No. 5, Morello), didn't get away well, I was worried the fractions were a little soft but he was able to overcome that and come with a big run. I think he got his last quarter-mile in 23.69 which is pretty impressive. He was resolute. He kept coming and I was thrilled to see him get there."

Right: Mo Donegal walks over before the race. Winning jockey Joel Rosario said, "It was a perfect trip. He kept digging in at the end and kept coming. It was a good race. I tried to save ground and it looked like the track was good inside, so I tried to stay there for as long as I could. He was handling everything well. I just rode him the way he came out and saw how he handled it and hopefully he comes with a finish. He was just galloping out and reaching out. Turning for home, we just had something left. He took off on his own." 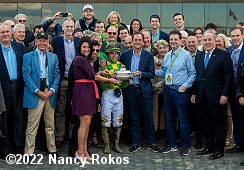 The trophy presentation for the Wood Memorial. Winning owner Jerry Crawford of Donegal Racing said, "I thought he was on wings. I think the performance he gave today was even better than it looked to the naked eye. I've been here all day yesterday and today and not one horse has closed on the dirt in two days and he came from far back. So, he had to be not just the best today, he had to be much-the-best to prevail. You never celebrate ahead of time, but I was confident for the last 100 yards at least. I love that we won today not for me, but for my partners."

Pletcher added, "You need a good trip in the Derby and with his running style, he's going to have to work his way through some traffic. But I think he's got some good experience and he showed today he can overcome a bit of a trip and zigzag when he needs to. Most importantly, it looks like he has the stamina to see out the trip. What I feel best about is a terrific win for the owners, Donegal Racing. That's what always gives our stable a lot of joy is when we're able to win big races for our owners." 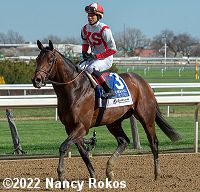 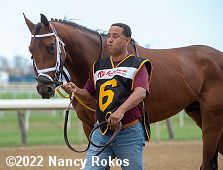 Left: Second place finisher Early Voting returns after the race. Trainer Chad Brown said, "I have to digest this and look at what happens everywhere today. Also, first and foremost look at the horse and put everything together to see if he'd have a reasonable chance to win the race. All along, we've said about this horse and really all our horses, I'm not interested in going (to the Derby) unless they have a legitimate chance to win the race. Based on his limited experience and such, I'm not sure, but let's see. He has the points, so probably. I don't want to make a decision until I evaluate everything."

Right: Third place finisher Skippylongstocking walks over before the race. Jockey Junior Alvarado said, "He has the ability. It was his second time going two turns so we knew he wanted it. We are always hoping to go to the Derby, so we had to try this one. He was a little premature this winter and he's a little late mentally. But we took a shot today and he ran a very good race." 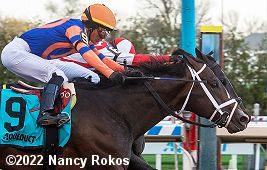 Kicking off the graded stakes quintet was the $200,000 Bay Shore Stakes (G3) featuring a field of eight 3-year-olds sprinting 7 furlongs on the main track. Wit was sent off as the 2-1 favorite, unraced since finishing 3rd in the Champagne Stakes (G1) in October. In to challenge him included 9-4 second choice Dean's List, second in the Gotham (G3). and 3-1 third choice Highly Respected off his debut win on February 26.

Jockey Dylan Davis sent 20-1 Fromanothamutha to the lead out of the chute through fractions or 22.21 and 45.55 while pressed by 21-1 Outkissed and stalked by 15-1 Scaramouche. Turning for home the pacesetters tired as Highly Respected moved up to gain a short lead through 3/4 in 1:10.32. Wit, 5th early under Jose Ortiz, came out 3 wide for room and rallied to win by a nose in 1:23.27. It was another 4 1/2 lengths back to 6-1 fourth choice Life Is Great third. 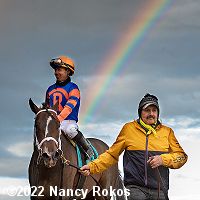 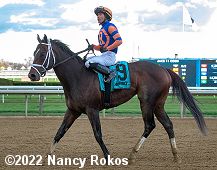 Left: Wit heads to the winner's circle under a rainbow. Winning owner Mike Repole said, "The wins get better every year. It's a track I've been coming so since I was 13-years-old, and 40 years later, winning graded stakes here is really special. I thought we lost; it was a special win. Todd [Pletcher] and I have been friends for a long time now. It's a lot of fun. I always say ‘think big, dream bigger.' This is one of those moments you always dream about in having a champion sprinter."

Right: Wit returns after the race. 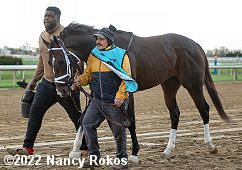 Left: The trophy presentation for the Bay Shore. Winning jockey Jose Ortiz said, "His problem last year was he was immature inside the gate and he would stand there awkwardly and break slow. As a 3-year-old, he's more mature and he's breaking better. He was sitting in a beautiful spot today. Approaching the quarter pole, Manny [Franco aboard Highly Respected] slipped through the hole and I thought he got me. But my horse showed his class. He was well trained and he was ready."

Right: Wit walks over before the race. 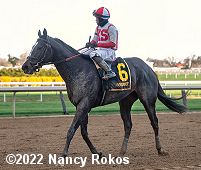 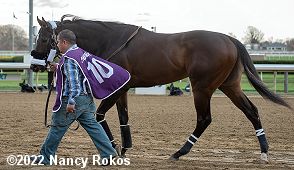 Left: Second place finisher Highly Respected returns after the race. Jockey Manny Franco said, "My horse ran really well second time out. He's still a baby and I think he has a bright future ahead of him."

Right: Third place finisher Life Is Great walks over before the race. Jockey Eric Cancel said, "He's a really decent horse. He tried very hard every time he runs and he's getting better day by day. Hopefully he keeps going the same way he's been going and he can get a stakes win."

On to the Carter Handicap, Gazelle Stakes, Distaff Handicap, and Danger's Hour Stakes also on the card.