There were 4 graded stakes races run over the Aqueduct main track on Saturday. The other Grade 1 event on Wood Memorial day is the $400,000 Carter Handicap (G1), a 7 furlong sprint for older horses and an early prep for the Breeders' Cup Sprint (G1). The Big Beast was sent off as the 9-5 favorite off 4 straight wins including the King's Bishop (G1). In to challenge him included 3-1 second choice Palace, unraced since 6th in the Breeders' Cup Sprint (G1), and 4-1 third choice Clearly Now, 8th in the Forego. 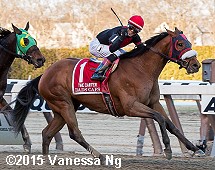 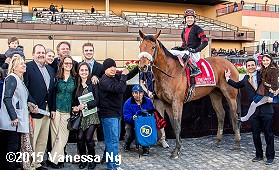 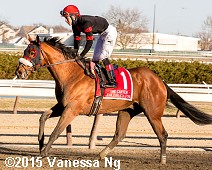 Left: Dads Caps in the winner's circle. Winning trainer Rudy Rodriguez said, "Very nice day. I said to Jose, don't go crazy. It worked out perfect. To win this race back-to-back is amazing. This is a good horse to be around, and we've had him since he was a baby, so it's special. A day like this means a lot to all of us; you work hard, and it pays off. Hopefully, it can just keep coming."

Right: Dads Caps returns after the race. He was an upset winner of this same race last year as well. 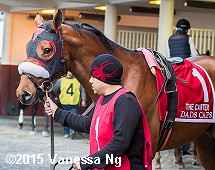 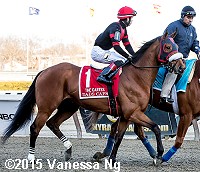 Left: Dads Caps in the paddock before the race.

Right: Dads Caps in the post parade. Winning jockey Jose Ortiz said, "I followed the instructions that Rudy gave me, he wanted to come from off the pace today, and it worked out great. The horse was great, I had to wait a little on the turn but I had a lot of horse so I just wanted to wait and follow the instructions rudy gave me. I want to thank Rudy and his staff they do a tremendous job and the owner Vincent Scuderi for always supporting me." 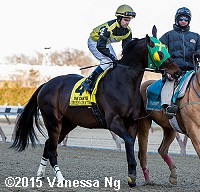 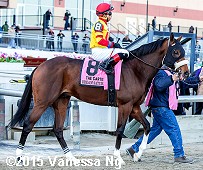 Left: Second place finisher Green Gratto in the post parade. The 53-1 shot set the pace under Fernando Jara but could not hold off the winner. The David Smith trainee improved his record to 3 wins, 5 seconds, and 4 thirds in 26 starts, earning $286,014 for owners Gaston and Anthony Grant and Basil Greene. 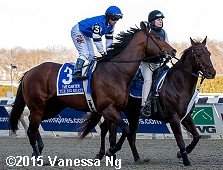 Left: Fourth place finisher and beaten favorite The Big Beast heads out for the post parade. Trainer Tony Dutrow said, "I don't think we had a rough trip. We just have to wait for another day and give it another try. I tink things went pretty well for the horse. We got trapped, but (Javier Castellano) got him out and we got him running there." 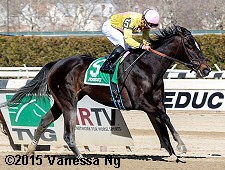 The filly counterpart to the Wood is the $300,000 Gazelle Stakes (G2) for 3-year-old fillies, also contested at 1 1/8 miles, and earns the winner 100 points on the Road to the Kentucky Oaks. Condo Commando was sent off as the 3-5 favorite in the field of 7 off wins in the Demoiselle (G2) and Busher. In to challenge her included 4-1 second choice Puca, fourth in the Davona Dale (G2), and 5-1 third choice Wonder Gal, unraced since third in the Breeders' Cup Juvenile Fillies (G1). 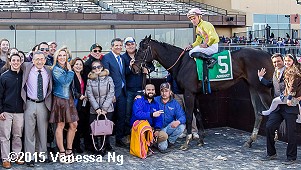 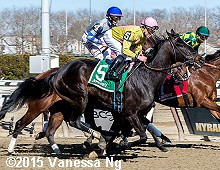 Left: Condo Commando in the winner's circle. Winning trainer Rudy Rodriguez said, "I told Joel if she broke good, just take it from there. She's a very nice filly. I don't know if [we will have the favorite for the Kentucky Oaks], but hopefully we can make it. It's still a long way to go. Hopefully, she stays sound and we take it from there. That's our goal." Owner Michael Dubb added, "She's just the real deal and I hope people realize that now. They said she had to have the lead, but Puca came through, and that was no problem for our filly. I don't want to sound too much like a cheerleader, but I'm a proud papa."

Right: Condo Commando shortly after the start of the race. Winning jockey Joel Rosario said, "I was surprised to see Puca going with me early. I didn't know how fast we were going but it seemed like a good pace. I just sat quiet on the outside for a little bit to see what (Manuel Franco aboard Puca) would do. When he took back, I went to the front. She's a big filly and she did it easy; she just kept her long stride going. When I turned for home, I pushed her a little bit and she was there for me." 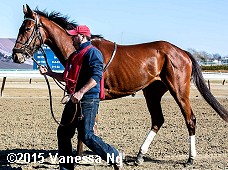 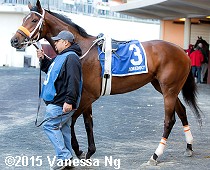 Left: Second place finisher Puca heads over to the paddock before the race. Trainer Bill Mott said, "She broke well. I think she had a pretty good trip. She looked good, but I think she was just second best today. We will talk to the connections and see if that's the way they want to go, but she's probable for the Oaks." Jockey Manuel Franco added, "She ran pretty well. She broke well and after that I found my spot. I didn't want to be too close to the pace."

Right: Third place finisher Money'soncharlotte in the paddock before the race. The 60-1 longest shot was last early under jockey Eric Cancel then rallied to get third beaten 5 1/4 lengths. The Kelly Breen trainee improved her record to 2 wins, 0 seconds, and 2 thirds in 6 starts, earning $136,750 for owners George and Lori Hall.