There were 4 graded stakes races run over the Aqueduct main track on Saturday before the crowd of 12,719. The other Grade 1 event on Wood Memorial day is the $500,000 Carter Handicap (G1), a 7 furlong sprint for older horses and an early prep for the Breeders' Cup Sprint (G1). Clearly Now was sent off as the 5-2 favorite in the field of 7 off his 5th place finish in the Cigar Mile (G1). In to challenge him included 3-1 second choice Sahara Sky, winner of the San Carlos (G2) at Santa Anita, and 7-2 third choice Golden Ticket, a close second in the Gulfstream Park Handicap (G2) last out.

Jockey Luis Contreras sent 10-1 Dads Caps to the lead and he set fractions of 23.58 and 46.56 over the fast track while pressed by 4-1 fourth choice Strapping Groom. Entering the lane, Strapping Groom tired as Dads Caps quickly opened up a 3 1/2 length lead through 3/4 in 1:09.79. Sahara Sky, 6th early, put in a strong 5 wide rally but was left with too much ground to recover as Dads Caps cruised past the post 1 1/2 lengths clear in 1:22.02. It was another 3 3/4 lengths back to favorite Clearly Now third. 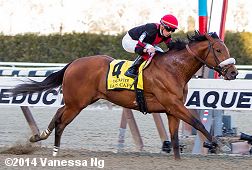 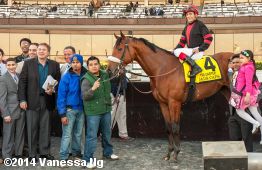 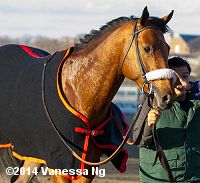 Left: Dads Caps in the winner's circle. Winning trainer Rudy Rodriguez, celebrating his first Grade 1 victory said, "We always thought he was a special horse. We ran him for maiden $60,000 just to get him eligible for the starter allowance. We never had the opportunity to run him in a starter allowance, but he was improving every time we ran him. We wanted to be on the lead, and I told Luis, 'If you go :23, they'll have a tough time catching you.' We went in :23, and everything worked out perfectly."

Right: Dads Caps heads back to the barns after the race. 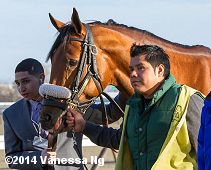 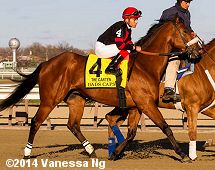 Left: Dads Caps heads over to the paddock before the race.

Right: Dads Caps in the post parade. Winning jockey Luis Contreras, also celebrating his first Grade 1, said, "Rudy told me this horse had a lot of speed early and just try to save horse to the end. He did it so easy and was very strong at the end." 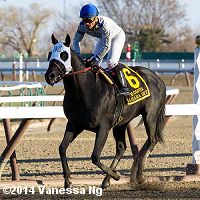 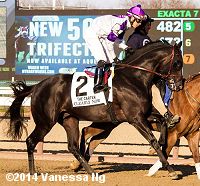 Left: Second place finisher Sahara Sky returns the race. Jockey Corey Nakatani said, "On paper there was more speed but nobody went. The pace was very soft. They went 23 and change and I'm sitting there not wanting to move too soon on him because his best races are coming from behind. Just the way the race set up he still was able to run second on a deep track that seemed to favor inside speed late in the day."

Right: Third place finisher and beaten favorite Clearly Now in the post parade. The 5-2 choice raced 5th early under Jose Ortiz then passed tired horses to get third beaten 5 1/4 lengths. The Brian Lynch trainee improved his record to 4 wins, 3 seconds, and 4 thirds in 12 starts, earning $573,236 for owner Up Hill Stable. 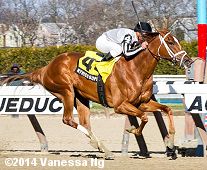 The filly counterpart to the Wood is the $300,000 Gazelle Stakes (G2) for 3-year-old fillies, also contested at 1 1/8 miles, and earns the winner 100 points on the Road to the Kentucky Oaks. My Miss Sophia, undefeated in 2 starts and making her stakes debut here, was sent off as the 4-5 favorite in the field of 6 over 5-2 second choice Got Lucky, second the Rachel Alexandra (G3) last out, and 3-1 third choice Sweet Reason, last year's Spinaway (G1) winner coming off an allowance win. 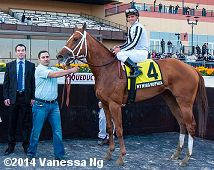 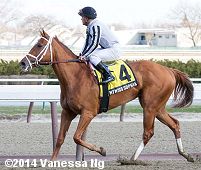 Left: My Miss Sophia in the winner's circle. Winning trainer Todd Pletcher said, "It went how we thought it might on paper. It looked like (My Miss Sophia) was the only speed, but you never know how a race is going to unfold. It certainly played out the way we thought it would.

Right: My Miss Sophia returns after the race. Winning jockey Javier Castellano said, "She broke well out of the gate. I was the only speed and I took advantage of it. She was able to relax. I was really impressed because she had only been shorter distances and today we stretched her out to 1 1/8. I think she improved and I liked the way she did it and she was much the best in the race." 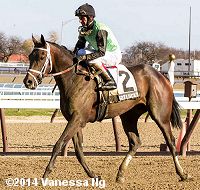 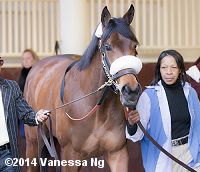 Left: Second place finisher Got Lucky returns after the race. Jockey John Velazquez said, "Good trip. It was what we expected. She doesn't show much speed. I try to place her wherever she's comfortable. She ran as best as she could."

Right: Third place finisher Sweet Reason in the paddock before the race. Trainer Leah Gyarmati said, "What are you going to do? I think she was a victim of the pace."