Sunday at Woodbine, the two major local preps for the Queen's Plate Stakes, the first leg of the Canadian Triple Crown, were contested over the Tapeta main track. Conditions were excellent at the Toronto oval next to Pearson International Airport, with cloudy skies and a race time temperature of 21 C (70 F), and the E.P. Taylor Turf Course rated firm (GoingStick 11.0). The highlight race of the afternoon was the 66th running of the $500,000 Budweiser Woodbine Oaks, featuring top Canadian-bred 3-year-old fillies going 1 1/8 miles, kicking off the Triple Tiara series. A field of 10 faced the starter, with Curlin's Catch sent off as the 5-2 favorite off her 3rd place finish in the Fury Stakes at Woodbine after finishing 5th in the Ashland (G1) at Keeneland in April. In to challenge her included 11-4 second choice Lorena, undefeated in 3 starts including the Fury, and 3-1 third choice Munnyfo Ro, 3rd in the Selene (G3) after finishing 6th in the Regret (G3) at Churchill Downs. 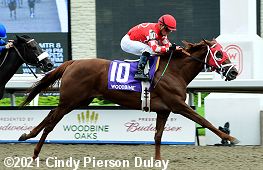 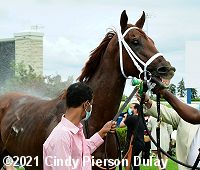 Left: Munnyfo Ro in the winner's circle. Winning trainer Kevin Attard said, "We were expecting a good performance out of her. She came up here this season in good shape from [trainer] Brian Lynch – had a great campaign over the winter time. She ran a fabulous race [second] in the Selene. I thought she'd move off that race forwardly enough to kind of be really competitive here today. Had a good interim breeze and put it all together."

Right: Munnyfor Ro gets hosed off after the race. Winning owner Rajendra Maharajh said, "My good buddy Art Fisher from Ocala picked her out for me. She came up here [last year] and ran two races. She was a little immature at the time. We sent her down to Florida and gave her the winter off and then with COVID, my other trainer, Brian Lynch, took her over and prepped her up and we were always planning for this race. Brian did a fabulous job getting her ready and then she came over just about a month ago and Kevin did the final touches on her and he did a fabulous job." 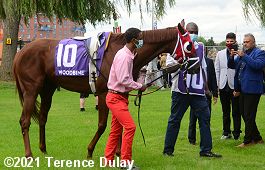 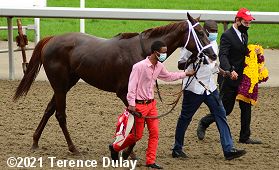 Left: Munnyfo Ro in the paddock before the race. Winning jockey Justin Stein said, "I was told the key with her is to have her settled. The pace, it looked like there was probably some possibility of them stopping, which we didn't want to be in behind them. I put her in a spot that we could tip out in the turn when it came time to ask her to run from the quarter-pole home. We had a dream trip; worked out perfect."

Right: Munnyfo Ro heads back to the barn after the race. Attard added, "These are the races you want to win growing up as a kid here in Ontario. With Woodbine my home, the Oaks and the Plate are obviously those pinnacle races for those 3-year-olds – just really happy and satisfied to get it done today. 1 1/4 mile is going to be her trip; I'm not worried about the distance. We'll see how she comes out of the race and then we're going to have to sit down and talk, and see if supplementing her is the next move." 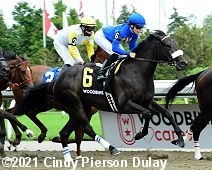 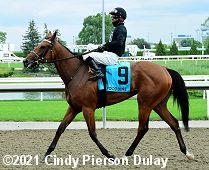 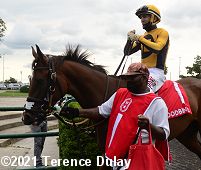 Right: The fillies break from the gate for the Woodbine Oaks. 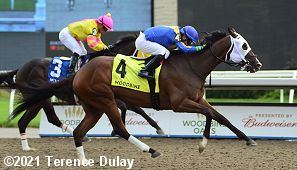 Kicking off the Sunday stakes quartet, a short field of just four Canadian-foaled three-year-old males also went 1 1/8 miles in the $150,000 Plate Trial Stakes, the major local prep for the Queen's Plate to be run in 4 weeks time. H C Holiday was sent off as the 3-2 favorite, still a maiden after 3 starts but was disqualified from 1st two starts back. In to challenge him were 8-5 second choice Avoman, winless since the Bull Page Stakes in September, 7-2 third choice Derzkii, 6th in the Woodstock before finishing 2nd in allowance company, and 4-1 longest shot Truffle King, a maiden after 4 starts but finishing in the money in his last 3.

Jockey Emma-Jayne Wilson sent Derzkii to the lead first time by and he set slow fractions of 25.35, 51.06, and 1:15.93 while pressed by Truffle King. Turning for home, Avoman, last early, swept to the lead 3 wide through 1 mile in 1:40.10, and held off Truffle King to win by 3/4 length in 1:52.84. It was a long 2 1/4 lengths back to favorite H C Holiday third, and 1 1/4 more to Derzkii last. Jockey Emma-Jayne Wilson aboard Derzkii claimed foul against Justin Stein aboard Truffle King for interference at the 1/8 pole, and after a brief inquiry the stewards disqualified Truffle King from second and placed him last.
Results Chart 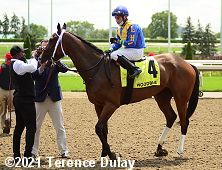 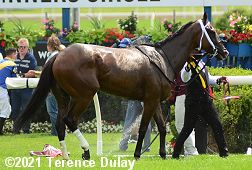 Left: Avoman returns after the race. Winning co-owner and trainer Don MacRae said, "The Queen's Plate is the game plan. I had to stall Jim (co-owner Jim Bruce) for a while -- he was ordering 40 tickets and a bus. I said, 'Let's just get through today.' That's what we're in it for, that's what we dream of -- to walk into the infield and have these big days, and maybe dream of the Plate."

Right: Avoman heads back to the barn after the race. Winning jockey Antonio Gallardo said, "I love to watch replays, I love to know my horses. I could see I have long-stride horse, he has a big kick at the end. I know it's not a lot of speed, I know these things are a bit long for him. In the beginning, I let him be strong. After that, I told him, 'Hey, you're not going nowhere' and he relaxed. I had to move a little bit early because there was no pace – I wanted to make sure the horse in front worked a little bit." 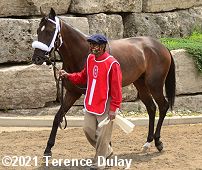 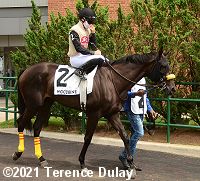 Right: Third placed horse Derzkil (moved up from last) heads out to the track before the race. The Carlos Grant trainee improved his record to 2 wins, 2 seconds, and 2 thirds in 9 starts, earning $121,111 for owners Fieldstone Farms and Jecara Farms. 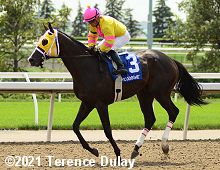 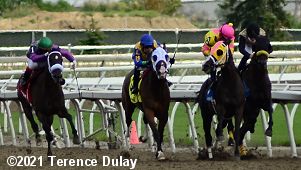 Right: The interference in the stretch that led to the DQ. Truffle King (pink cap) with Justin Stein aboard ducked inwards at the 1/8 pole, forcing Emma-Jayne Wilson on Derzkii (yellow shadow roll) to check. Wilson's claim of foul and the stewards' inquiry led to the disqualification, placing Truffle King behind Derzkii. 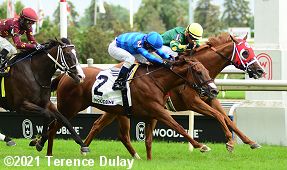 The $175,000 Royal North Stakes (G2) featured a field of 8 older fillies and mares sprinting 6 furlongs on the Taylor turf. Change of Control was sent off as the even-money favorite off her win in the Intercontinental Stakes (G3) at Belmont Park. In to challenge her included 7-2 second choice Amalfi Coast, 3rd in the Whimsical Stakes (G3), and 5-1 third choice Jeanie B, an allowance winner after finishing 6th in the Lightning City Stakes at Tampa Bay Downs.

Jockey Gary Boulanger sent 23-1 Sister Peacock to the lead through fractions of 22.78 and 45.83 while pressed by Jeanie B and stalked by Change of Control. Turning for home, Jeanie B gained the lead through 5f in 57.16 but Amalfi Coast, 5th early under Justin Stein, put in a strong late rally to win by a nose in 1:09.15. It was another 1/2 length back to favorite Change of Control third. Lead Guitar, who was 2-1 in the morning line, trailed throughout and was ruled by the stewards to have had an unfair start, requiring a refund for parimutuel purposes.
Results Chart 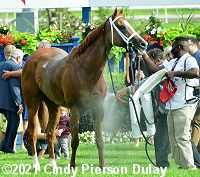 Left: Amalfi Coast in the winner's circle. Winning trainer Kevin Attard said, "It's a funny game. She's a special horse. Last year she ran into some issues, some bad luck and a little throat issue early on. I kind of mismanaged her maybe a little bit wrong, so this year we came in with a different game plan. She's really appreciated that and she's showing the horse that she's capable of being."

Right: Amalfi Coast gets hosed off after the race. Winning jockey Justin Stein said, "She's push-button to ride; very professional horse. She knows what she's doing. I've watched her run and got to be fortunate enough to ride her and steer her around a few times. When I pulled the trigger, she gives me everything she's got. She came over ready and is a pleasure to be around. She's a really nice horse." 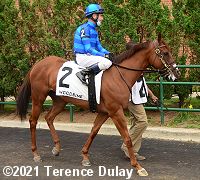 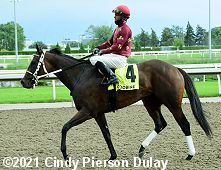 Left: Second place finisher Jeanie B heads out to the track before the race. The Mark Casse trainee improved her record to 4 wins, 4 seconds, and 2 thirds in 13 starts, earning $155,161 for owner CJ Thoroughbreds.

Right: Third place finisher and beaten favorite Change of Control returns after the race. The Michelle Lovell trainee improved her record to 7 wins, 6 seconds, and 6 thirds in 28 starts, earning $566,462 for owner Perry Harrison. 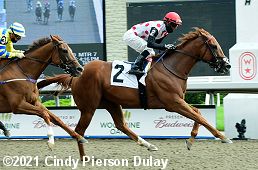 The $150,000 Vigil Stakes (G3) featured a field of 6 older horses sprinting 6 furlongs on the Tapeta. Carter Handicap (G1) 3rd place finisher and Jacques Cartier (G3) winner Souper Stonehenge was sent off as the 3-10 favorite over 3-1 Pink Lloyd, last year's winner but 2nd in the Jacques Cartier last out, and 11-1 Not So Quiet, an allowance winner in his 2021 debut after winning the Vice Regent and Overskate to close out 2020. 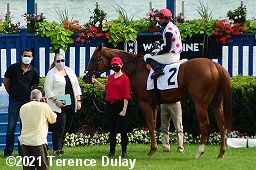 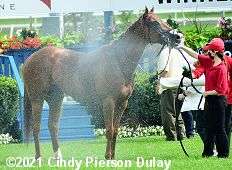 Left: Souper Stonehenge in the winner's circle. Winning jockey Patrick Husbands said, "He's one of my little favorites. We kid around, we play around. He's just a horse you want to be around. It's good to sit on light horses and good to sit on good horses."

Right: Souper Stonehenge gets hosed off after the race. Husbands added, "I've ridden probably 180 big races for Mark [Casse, trainer]; he never gave me instructions. I have the confidence in this horse. He left there, what he wanted to do, and I just left him alone. It worked out good today." 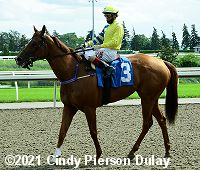 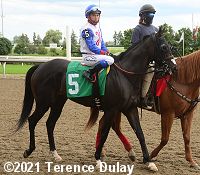 Right: Third place finisher Not So Quiet in the post parade. The Mark Casse trainee improved his record to 6 wins, 0 seconds, and 2 thirds in 14 starts, earning $283,927 for owner-breeder Heste Sport Inc.