Saturday at Woodbine, the two major local preps for the Queen's Plate Stakes, the first leg of the Canadian Triple Crown, were contested over the Tapeta main track. Conditions were excellent at the Toronto oval next to Pearson International Airport, with sunny skies and a race time temperature of 23 C (73 F). The highlight race of the afternoon was the $500,000 Budweiser Woodbine Oaks, featuring top Canadian-bred 3-year-old fillies going 1 1/8 miles. A field of 10 faced the starter, with Speedy Soul sent off as the lukewarm 11-4 favorite off her win in the Fury Stakes. In to challenge her included 3-1 second choice Intanga Rose, 4th in both the Star Shoot and the Fury, and 7-2 third choice Hastalavistababy, 2nd in both the Ontario Lassie and the Fury.

Jockey Eurico da Silva sent Intanga Rose to the lead first time by and she set fractions of 23.48, 48.01, and 1:12.55 while pressed by Speedy Soul and stalked by 49-1 Lady Azalea and 130-1 Falcon's View. Entering the lane, Intanga Rose tired as Speedy Soul took over through 1 mile in 1:37.44. 5-1 Bold Script, 6th early, came out 3 wide to gain a short lead inside the 1/8 pole but 8-1 Desert Ride, last early after hitting the starting gate, came out 5 wide under confident handling by Steven Bahen and rallied to win by a neck in 1:50.43. It was another 1 3/4 lengths back to favorite Speedy Soul third. 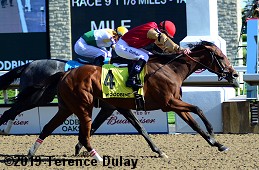 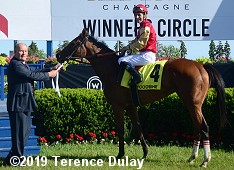 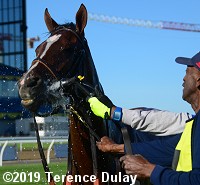 Left: Desert Ride in the winner's circle. Rick Balaz, president of winning owner-breeder Sam-Son Farm said,  "A fantastic filly from a fantastic family and we're just so happy to be back up here again. It's been a little while for us and it's pretty exciting. We'll see where we go next with her, but hopefully she's got a great future."

Right: Desert Ride gets a drink while she gets hosed off after the race. Winning trainer Neil Howard said, "She's a lovely filly. The mile and an eighth was obviously something that we were looking forward to and she needed every bit of that. We couldn't be more thrilled as Mr. Samuel and Mr. Balaz said. She's just a just a lovely filly, easy to train and Steven rode her beautiful." 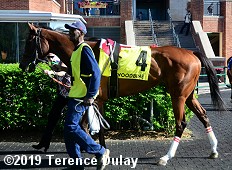 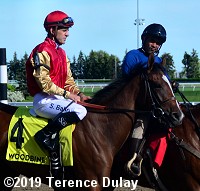 Left: Desert Ride in the paddock before the race. Sam-Son Farms CEO Mark Samuel said, "If I'm taking a line from the Raptors, you play it one game at a time and we just got this one on the scoreboard and we'll see how she comes out of it and then we'll have a conversation as we always do about what to do next. But we're very excited by her and we love our good fillies."

Right: Desert Ride in the post parade. Winning jockey Steven Bahen said, "I've watched her races and she's come from behind. Neil (Howard) said just get her settled in and try to give her a good trip. Down the backside, it looked like I'm going to get out now and give her a shot to run at them, and I started a little early with her, but when she turned for home, she gave me a huge run like she did in her previous races." 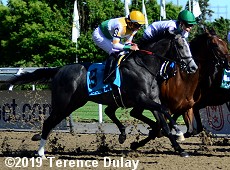 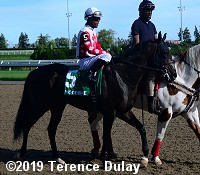 Left: Second place finisher Bold Script races in 6th first time by. The 5-1 fourth choice raced 6th early under Gary Boulanger then rallied, led late in the stretch but was outfinished. The Stuart Simon trainee improved her record to 2 wins, 2 seconds, and 3 thirds in 8 starts, earning $297,721 for owner-breeder Chiefswood Stables.

Right: Third place finisher and beaten favorite Speedy Soul in the post parade. The 11-4 choice pressed the pace under jockey Gary Boulanger and held on to get third beaten 2 lengths. The Mark Casse trainee improved her record to 3 wins, 0 seconds, and 1 third in 5 starts, earning $196,388 for owner-breeder Joe Guerrieri (Joey Gee Thoroughbreds). 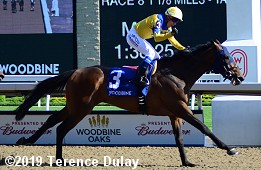 Immediately before the Oaks, a field of 9 Canadian-foaled three-year-old males also went 1 1/8 miles in the $125,000 Plate Trial Stakes, the major local prep for the Queen's Plate to be run in 3 week's time. Federal Law was sent off as the 9-5 favorite off his Queenston Stakes win after finishing 3rd in the Wando. In to challenge him included 9-4 second choice Jammin Still, 2nd in an allowance after finishing 5th in the Coronation Futurity, and 7-2 third choice Dun Drum, 3rd in the Queenston.

Jockey Gary Boulanger sent favorite Federal Law to the lead first time by and he set fractions of 24.17, 48.64, and 1:12.73 while pressed by Dun Drum and stalked by 20-1 Pay for Peace. Federal Law continued to lead to midstretch through 1 mile in 1:38.25, but jockey Luis Contreras aboard Pay for Peace sent the longshot through at the 1/16 pole and he drew off late to win by 1 3/4 lengths in 1:51.63. It was a head back to late-running 26-1 Rising Star third.
Results Chart 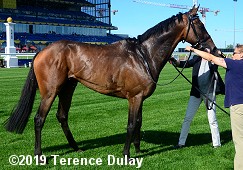 Left: Pay for Peace in the winner's circle. Winning jockey Luis Contreras said, "You've got a chance to win if you're in the race. You never know. I told Rachel before, I think he likes to run, and he likes to run all day, so he can run further. I think it's his style to be in the long races. I can tell you he had a good break and I saw the one break a little bit and he kind of rushed to the lead and I think that kind of helped a little."

Right: Pay for Peace takes a drink while getting hosed off after the race. Winning trainer Rachel Halden said, "I'm just absolutely delighted. Obviously, he's just taken a little while to come back around this year for us. He did run a very good race his last start against older horses and looking at this race, we were hoping to maybe get a piece of it because it didn't look like it was going to be a huge field. We weren't thinking about (the Plate). Like I say, he's just a real big old galloper. I think this horse will step up on the turf and we've been kind of thinking Breeders' Stakes. He did jump up and run a big race today. We will definitely be thinking about it now and we'll see how he comes out of it and have a discussion with his owners and see." 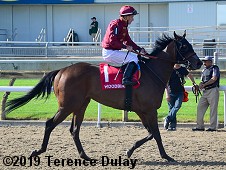 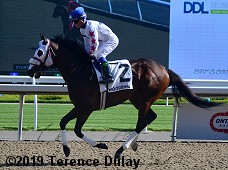 Left: Second place finisher and beaten favorite Federal Law returns after the race. The 9-5 choice set the pace under Gary Boulanger but was no match for the winner late. The Mark Casse trainee improved his record to 3 wins, 4 seconds, and 1 third in 11 starts, earning $166,688 for owner Qatar Racing Stable.

Right: Third place finisher Rising Star takes off after the post parade. The 26-1 shot was last early under Justin Stein but rallied to get third beaten 1 3/4 lengths. The Mike DePaulo trainee improved his record to 0 wins, 0 seconds, and 3 thirds in 8 starts, earning $27,823 for owner Zilli Racing Stables. 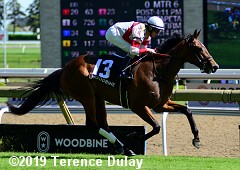 Kicking off the stakes action on Sunday was the $100,000 William D. Graham Memorial Stakes (formerly run as the Alywow Stakes) for 3-year-old fillies sprinting 6 1/2 furlongs on the good-to-firm (GoingStick reading 10.7) E.P. Taylor Turf Course. Sister Peacock was sent off as the 5-2 favorite in the field of 13 off her win in the Star Shoot Stakes at Woodbine after finishing 2nd in the Andromeda and Mrs. Presidentress Stakes both at Gulfstream. In to challenge her included 3-1 second choice Western Curl, 3rd in the Fury, and 11-2 third choice Furiously Fast, an allowance winner last out. 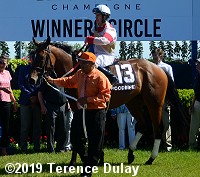 Sister Peacock in the winner's circle. Winning co-owner and trainer Stuart Simon, celebrating his 800th win as a trainer said, "I've got to give all the credit to my crew – my assistant and grooms. They do a very hard job every day. They brought her over about four or five times and schooled her well. They deserve the credit. We named her after a guy (Cecil Peacock) that I trained for for about 30 years. He was one of the nicest men you'll ever meet. So, I wanted to pay tribute to him and name her that."

Winning jockey Jesse Campbell said, "She's a racehorse. Stuart said to ride her like the best horse, I did. She went out and did her thing."

A tradition on Woodbine Oaks day is the Avelino Gomez Memorial Award ceremony. It is a lifetime achievement award given to a Canadian-born, Canadian-raised, or regular rider in Canada for 5 years, who has made significant contributions to the sport, with the winner receiving a replica of the life-size statue that overlooks the walking ring. The Cuban-born Gomez died of complications after a 3-horse spill during the 1980 Canadian Oaks, and the award named in his honour is Canada's equivalent to the George Woolf Memorial Award in California and the Mike Venezia Memorial Award in New York. This year's inductee is Frank Barroby, a Saskatchewan native who is already in the Canadian Horse Racing Hall of Fame for his achievements as both a jockey and a trainer. Barroby actually rode against Gomez during his two seasons riding at Woodbine. Barroby, the "King of the Bullrings", started riding on the prairie circuit in Alberta and Saskatchewan, before spending 2 years at Woodbine. He finished at Hastings Park in Vancouver, riding there for 8 years before retiring as a jockey and switching to training. He was inducted into the Hall of Fame in 2010.

Barroby said, "I love the guy and what an athlete he was. He was kind of a showy guy and just as good a rider as I've ever seen. He was probably one of the best athletes I've ever seen put a leg over a horse. You could watch him and you could just see the horse extend when he'd put him in a drive. A lot of times I know I'd finish second on a horse and he'd maybe pick it up and win the next time, but that was part of the game. [The award] means a lot to me."