The $500,000 Woodbine Oaks Presented by Budweiser is the most important race for 3-year-old fillies foaled in Canada. A field of 10 went 1 1/8 miles over the Polytrack on Sunday at Woodbine Racetrack in Toronto, with intermittent rain, steady drizzle, and temperatures in the mid 60's. Fury and Ontario Lassie Stakes winner London Tower was sent off as the 9-10 favorite. In to challenge her included 6-1 second choice Brooklynsway, off her fourth place finish in the Fury, and 7-1 third choice Galina Point, winner of the Lady Angela last out.

Jockey Justin Stein sent 66-1 longest shot Academic to the lead first time by and she set fractions of 23.63, 48.01, and 1:12.33 while stalked by 12-1 Internal Bourbon and 39-1 Red River Heidi. Entering the stretch, Academic opened up on the field, gaining a 4 1/2 length advantage through 1 mile in 1:36.27. Favorite London Tower, 7th early, came out 4 wide for room and rallied strong but Academic easily held her off by 1 3/4 lengths for the big upset in a new track record time of 1:48.86. It was a nose back from London Tower to 9-1 fifth choice Season Ticket third. 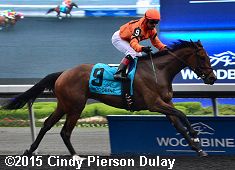 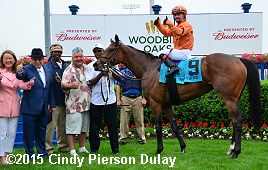 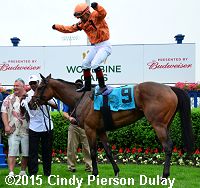 Left: Academic in the winner's circle with everyone giving a thumbs up. Winning trainer Reade Baker said, "She basically determines what she's going to do. It's not really up to us. She's got a mind of her own. The plan was to stay a length in front. Usually, when you get two or three in front, you can get them back to a length. Justin couldn't even do that today."

Right: Jockey Justin Stein does a flying dismount. Stein said, "I didn't even have to ride her to the wire. The last few jumps I looked over and we had it wrapped up. Inside the 70-yard pole, I looked up and there was no one coming. I couldn't believe it. I knew we were going at a good clip, but she was real comfortable. She was relaxed but I had a lot of horse. At the 3/8 pole, when they came to her a little bit I just let her out a notch and they had to run hard to get to her there.  At that point, when I opened her up again, she was going easy and had so many gears left." 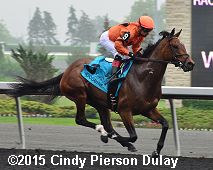 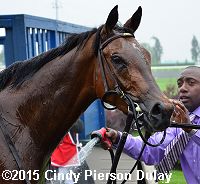 Right: Academic gets hosed off after the race. Baker added, "We thought the race was good enough the other day. I thought (the Oaks) was falling apart. Some of the good ones didn't look that good, some of them didn't work that good, so Danny said ‘give it a shot.' " 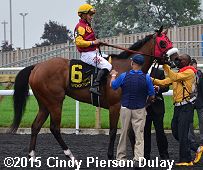 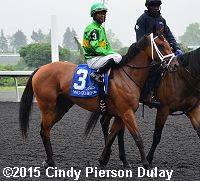 Left: Second place finisher London Tower returns after the race. Jockey Alan Garcia said, "She was sitting down a little bit and she did it again like the first time (winning the Fury Stakes).  It was an unlucky break.  The winner was loose on the lead and took it away."

Right: Third place finisher Season Ticket in the post parade. The 9-1 shot raced 9th about 7 lengths off the pace under Patrick Husbands, then rallied between horses to get third beaten 1 3/4 lengths but just missing second by a nose. The Mark Casse trainee improved her record to 1 win, 1 second, and 1 third in 6 starts, earning $82,544 for owner Woodford Racing. 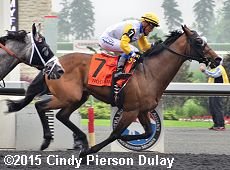 Immediately before the Oaks, a field of 12 Canadian-foaled three-year-old males also went 1 1/8 miles in the $150,000 Plate Trial Stakes, the major local prep for the Queen's Plate to be run in 3 week's time. Danzig Moon was sent off as the 2-1 favorite off his 5th place finish in the Kentucky Derby (G1) and then 6th in the Preakness (G1). In to challenge him included 3-1 Conquest Curlinate, second in the Illinois Derby (G3) and Peter Pan (G2), and 4-1 Danish Dynaformer, third in the Marine (G3) last out.

20-1 Midnight Trace set the early pace of 24.00 and 48.68 while pressed by Danzig Moon and stalked by 38-1 Portree. Nearing the end of the backstretch, Danzig Moon broke down, and as jockey Julien Leparoux attempted to pull him up, 11-1 R U Watchingbud with jockey Emma-Jayne Wilson collided with him and both fell to the track unseating their riders. Midnight Trace tired allowing Portree to inherit the lead through 3/4 in 1:13.13 and 1 mile in 1:37.44 before tiring in the last furlong. Danish Dynaformer, 7th early, outfinished Conquest Curlinate, 9th early, by 3/4 length for the wuin in 1:49.81. It was another 1 1/4 length back to late-running 24-1 Conquest Boogaloo third. Sadly, Danzig Moon had to be euthanized due to a compound fracture in his right hind leg. R U Watchingbud escaped injury, as did both jockeys.
Full results chart from DRF 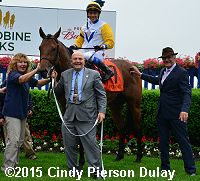 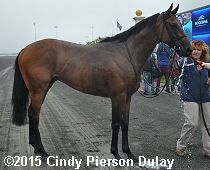 Left: Danish Dynaformer in the winner's circle held by owner Charles Fipke. Trainer Roger Attfield said, "Danish Dynaformer ran the way I expected him to run. I have always been very high on this horse." He will attempt to become the first trainer to win 9 Queen's Plates. He is currently tied with Harry Giddings Jr. with 8 wins in the classic.

Right: Danish Dynaformer gets hosed off after the race. Winning jockey Luis Contreras said, "(Danzig Moon) was right behind me when that happened, but I was on the outside.  I felt sorry for that horse. There was a lot going on but you can do anything with this horse.   He's very relaxed and calm.  Everytime you ask him, he goes.  It feels really good (about his chances in the Queen's Plate). He's so nice. You can do anything you want with him in a race. That's a racehorse." 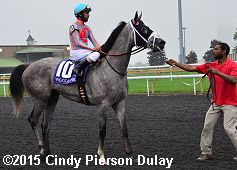 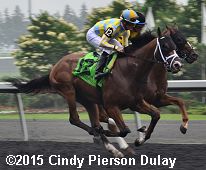 Left: Second place finisher Conquest Curlinate balks a bit as he returns after the race. The 3-1 second choice raced well off the pace early under Shaun Bridgmohan, then rallied well to get second beaten 3/4 length. The Mark Casse trainee improved his record to 1 win, 3 seconds, and 1 third in 6 starts, earning $188,490 for owner Conquest Stables.

Right: Favorite Danzig Moon (outside) vies for the lead shortly after the start. Sadly, he broke his right hind leg during the race and had to be euthanized. Ontario Racing Commission veterinarian Dr. Greg Taylor said, "The injury consisted of a compound fracture and the horse was humanely euthanized.  The horse will go for a post mortem at Guelph (Equine Hospital) this afternoon." 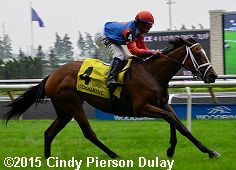 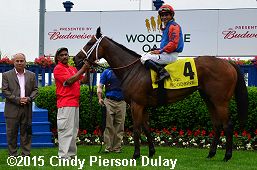 Kicking off the stakes action on Sunday was the $100,000 Alywow Stakes for 3-year-old fillies sprinting 6 1/2 furlongs on the turf. Jamestown Stakes winner Hooligan was sent off as the 2-1 favorite over 3-1 Mississippi Delta, unraced since winning the Glorious Song in November, and 7-2 Ancient Goddess, winner of the Star Shoot Stakes.

13-1 Lady Ekati and 25-1 Green Doctor dueled for the lead down the backstretch and around the turn through fractions of 23.67 and 47.78. Down the lane, Green Doctor gained the front as Lady Ekati tired. However in the final furlong, Mississippi Delta, last early, rallied past the tiring pacesetters on the outside to win going away by 3 lengths over 18-1 Appeal to the Win in 1:18.64 over the yielding course. It was another 1/2 length back to 12-1 February Rose third, while Hooligan checked in 9th.
Full results chart from DRF

Winning jockey Alan Garcia said, "It was very easy. She broke good, and I had to keep her comfortable since the turf was very soft. I had to wait a bit but she came running in the end and did it really well. She was loving this turf course today." Trainer Mark Casse added, "(Owner) Mike Rutherford kept telling me to put her on the turf, so I did. She's bred for the grass and she ran well." 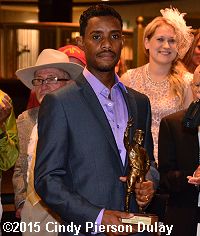 The Avelino Gomez Memorial Award, Canada's equivalent to the George Woolf Award in California and the Mike Venezia Award in New York, is a lifetime achievement award for a jockey, Canadian-born, Canadian-raised, or a regular rider here for more than 5 years, who has made significant contributions to the sport. The 2015 award went to Quincy Welch, a Barbados native who has called Alberta home since 1997. He has 1,867 wins in 9,814 starts so far, with purse earnings of over $23 million. Among his top mounts include True Metropolitan, Cash on the Run, and Amazin Blue, and he has won races across Canada. 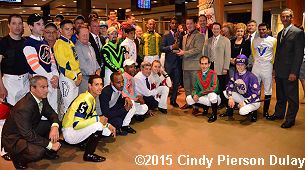 The award is presented annually on Oaks day, the anniversary of Gomez's death from complications after a three-horse spill in the 1980 running. A life-size statue of Gomez overlooks the Woodbine walking ring, and each year's honoree receives a replica.