The $500,000 Woodbine Oaks Presented by Budweiser is the most important race for 3-year-old fillies foaled in Canada. A field of 8 went 1 1/8 miles over the Polytrack on Sunday at Woodbine Racetrack in Toronto. Conditions were excellent with sunny skies and temperatures in the low 70's. Spring in the Air was sent off as the 7-5 favorite off her win in the Fury Stakes. In to challenge her included 5-2 second choice Nipissing, third in the Selene (G3), and 11-2 third choice Smartyfly, who finished second beind Spring in the Air in the Fury.

Jockey Jesse Campbell sent 7-1 Original Script to the lead first time by and she set easy fractions of 23.89, 48.49, and 1:13.01 while pressed by 43-1 Tiz Ro to her outside. Original Script opened up at the top of the lane, gaining a 2 length advantage through 1 mile in 1:37.60, but Spring in the Air, last early, and Nipissing, sixth early, were rallying in an all-out duel down the center of the track. In the final 1/16 Nipissing outfinished Spring in the Air to win by 3/4 length in 1:50.34. It was just 3/4 length back to pacesetter Original Script third. 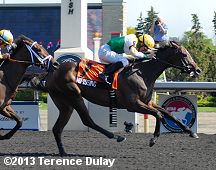 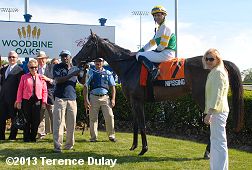 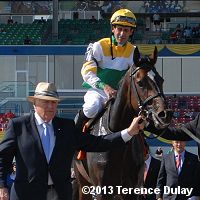 Left: Nipissing in the winner's circle with trainer Rachel Halden at her hip. This was Halden's first Oaks win with her first Oaks starter. She said, “It feels great. It just seems such a long time ago that she won the Princess Elizabeth and we started talking about this race. You just hope she stays healthy and everything goes to plan and fortunately it did. And here we are today.”

Right: Winning owner Robert Krembil leads Nipissing to the winner's circle. He said, “We’ll see how she comes out of this race. The (Queen's Plate) distance won’t be a problem. She can certainly go the mile and a quarter.” 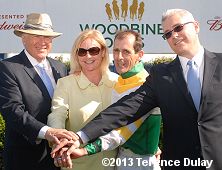 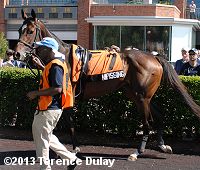 Left: Winning owner Robert Krembil, trainer Rachel Halden, jockey Steven Bahen, and owner Mark Krembil pose in the winner's circle. Bahen said, “Last time (in the Selene) we were a little further back so I was hoping she’d break a little sharper, which she did today. I wanted to be 3 or 4 lengths off the pace, sit on the outside and give her a clean trip. It worked out perfectly. I heard (Spring in the Air) coming, I said, ‘C’mon, wire’. But she ran her eyeballs out and she galloped out strongly like she always does. She’s a great horse.”

Right: Nipissing in the paddock before the race. 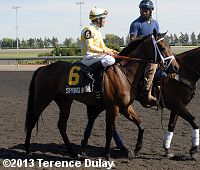 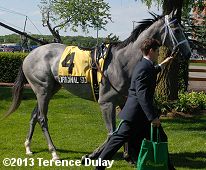 Left: Second place finisher and beaten favorite Spring in the Air in the post parade. She was last for the first 3/4 mile under jockey Joel Rosario, rallied well but just missed. The Mark Casse trainee improved her record to 3 wins, 4 seconds, and 0 thirds in 9 starts, earning $640,147 for owner John Oxley.

Right: Third place finisher Original Script in the paddock. She set the pace under jockey Jesse Campbell but failed to hold off the first two in the final 1/16. The Paul Attard trainee improved her record to 3 wins, 1 second, and 1 third in 6 starts, earning $221,008 for owner Chiefswood Stable. 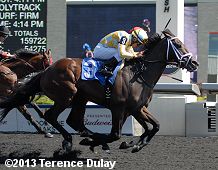 Immediately before the Oaks, a field of 11 Canadian-foaled three-year-old males also went 1 1/8 miles in the $150,000 Plate Trial Stakes, the major local prep for the Queen's Plate to be run in 4 week's time. Pyrite Mountain, winner of the Wando Stakes on May 3, was sent off as the 5-2 choice in the field of 10. In to challenge him included 3-1 second choice Dynamic Sky, third in the Queenston Stakes after a disappointing 9th in the Blue Grass (G1), and 4-1 third choice River Seven, fourth in the Queenston after winning the Grey (G3) in October.

60-1 Holy Whirl Wind and 15-1 Midnight Aria battled for the early lead through fractions of 23.56, 48.57, and 1:14.06 while stalked by 6-1 Kid Dreams. As Kid Dreams and Holy Whirl Wind tired, Midnight Aria continued to lead through the stretch. Dynamic Sky, 8th early, and 12-1 His Race to Win, 7th early, ran past Midnight Aria at the 1/16 pole in a duel to the line. Dynamic Sky outfinished His Race to Win by a nose in 1:50.59. It was another 1 1/4 length back to Midnight Aria third, and another 1 1/4 back to late-running favorite Pyrite Mountain.
Full results chart from DRF 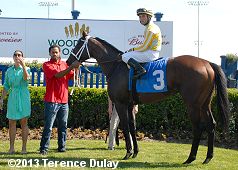 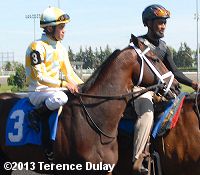 Left: Dynamic Sky in the winner's circle. Jockey Joel Rosario said, "I thought (Dynamic Sky) had a good chance (to win) as he had been running with good horses like Verrazano. We just got up in the last jump and got the money. Mark took the blinkers off today and he was more relaxed and I could do exactly what I wanted to do with him.

Right: Dynamic Sky in the post parade. The Mark Casse trainee improved his record to 3 wins, 2 seconds, and 2 thirds in 10 starts, earning $411,886 for owner John Oxley. 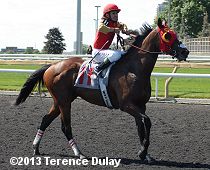 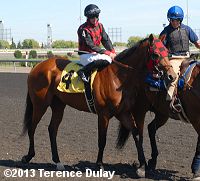 Left: Second place finisher His Race to Win returns after the race. Jockey Eurico Rosa da Silva said, "My horse ran great. He's improving and he's going to get better. He ran such a great race."

Right: Third place finisher Midnight Aria in the post parade. Jockey Jesse Campbell said, "That's what he wants. He's a big long horse and he was happy out there on the lead. He ran huge and held strong to the wire." 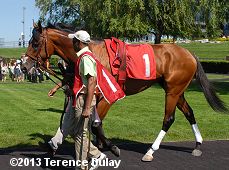 Beaten favorite and fourth place finisher Pyrite Mountain in the paddock before the race. The 5-2 favorite was 9th and 9 lengths back for the first 5/8 mile, then rallied 4 wide to get fourth beaten 2 1/2 lengths. The Mark Frostad trainee has a record to 2 wins, 2 seconds, and 0 thirds in 6 starts, earning $183,030 for owner Awesome Again Racing L.P.