The $500,000 Woodbine Oaks Presented by Budweiser is the most important race for 3-year-old fillies foaled in Canada. A field of 9 went 1 1/8 miles over the Polytrack on Sunday at Woodbine Racetrack in Toronto. Conditions were less than ideal all day, with intermittent rains, temperatures in the low 60's, and a stiff 20 MPH headwind through the stretch, but the skies cleared in time for the feature As expected, Queen's Plate winter book favorite Dixie Strike was sent off as the 9-10 favorite off her win in the Selene Stakes (G3). In to challenge her included 2-1 second choice Northern Passion, winner of the Fury last out, and 8-1 third choice Black Bird Rock, after breaking her maiden in her second career start.

Jockey Eurico Rosa da Silva sent Black Bird Rock to the lead first time by and she set slow fractions of 25.11, 49.79, and 1:13.10 while pressed by 42-1 Horseshoe Hill and 9-1 Irish Mission. Entering the lane, Black Bird Rock continued to stubbornly hold the lead through 1 mile in 1:37.78 but tired soon after Irish Mission came through between horses to win by 3/4 length over late-running Northern Passion in 1:50.50. It was just a head back to 35-1 Awesome Fire third, while favorite Dixie Strike checked in 5th. 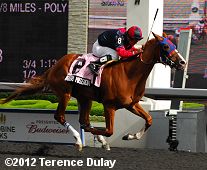 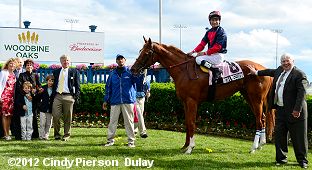 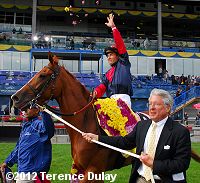 Left: Irish Mission in the winner's circle with trainer Mark Frostad at her hip. Frostad said, "It's always a thrill to win this race, it's a huge race here, and a very nice filly. It was a big step up for her, she went from a maiden race to the Oaks, it's a big step. But, she's been improving all along, and as she's getting older she's got a lot stronger. That has to be decided, I will talk to Robert S and Patrick, and we will see how she comes out of the race and how she bounces back." This was Frostad's fourth Oaks win.

Right: Winning owner Robert Evans leads Irish Mission while jockey Alex Solis tosses flowers as they parade for the fans. Evans said, "She has been doing very well, she's a great big filly, and it's taking her a while to develop, it's her 9th start. Mark Frostad has been doing a wonderful job training her, he said all along she was an Oaks filly, and sure enough she was. He advised me to buy her as a yearling in Saratoga, and I did, and he said that she would be an Oaks filly, now he's won it with her. That's terrific. We might come back in the Queen's Plate, if she comes out of this race well, but, it looks pretty tough though." This was Evans' first Woodbine Oaks win, with his first starter. 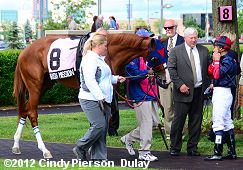 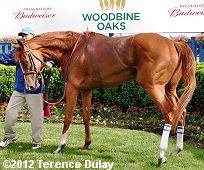 Left: Irish Mission in the paddock with trainer Mark Frostad giving instructions to jockey Alex Solis. Solis, riding her for the first time said, "Yes, I worked her a few times. I really liked what I had underneath me, a very nice feeling. The way she ran, she had high motion speed, and she could stay the distance, we had the mind to keep it close to the pace and soon as we hit the turn, she kept going. She sure did, showed determination, from the 3/8 portion to the outside. The more that I asked her, the more she gave. I am so glad to be here." This was Solis' first Woodbine Oaks win, with his first mount.

Right: Irish Mission gets ready to head back to the barn after the race. She is the first winner since Kimchi in 2006 to make the Oaks her first stakes win. She broke her maiden last time out at Keeneland. 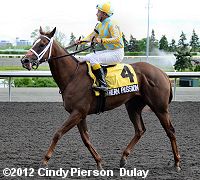 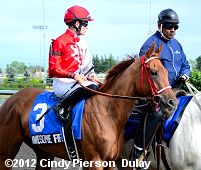 Right: Third place finisher Awesome Fire in the post parade. Her jockey Emma-Jayne Wilson said, "She ran an unbelievable race. She battled every inch down the lane. She was cruising along, I gave her a cue and she kicked on. We just got nosed out for second, but she gave it everything she had. (Laughing) I was getting 10 tweets a day from Hugh leading up to the race about what we should do and it worked out. I'm happy for him and I'm proud of how she performed." 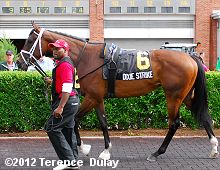 Left: Fifth place finisher and beaten favorite Dixie Strike in the paddock before the race. Her jockey Patrick Husbands said, "I had a beautiful trip. She'll be back."

Right: The entire field shortly after the start of the 2012 Woodbine Oaks. 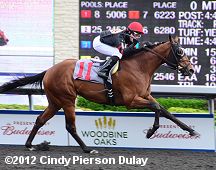 Immediately before the Oaks, a field of 11 Canadian-foaled three-year-old males also went 1 1/8 miles in the $150,000 Plate Trial Stakes, the major local prep for the Queen's Plate to be run in 3 week's time. Beeker Street, undefeated in 2 starts including the Queenston Stakes, was sent off as the lukewarm 3-1 choice over 5-1 Big Creek, third in the Wando last out, and 6-1 Making Amends, off a second in the Queenston. Jockey Alex Solis sent 8-1 Incredicat to the lead and he set fractions of 23.98, 47.36, and 1:10.89 while stalked by Big Creek and Beeker Street. Incredicat held onto a short lead through 1 mile in 1:35.99, but 21-1 River Rush, who was last through the first 1/2 mile, came through on the inside and ran right by the pacesetter to win going away by 5 1/4 lengths in a new track record time of 1:48.97 for 9 furlongs on Polytrack. It was another length back from Incredican to 10-1 Classic Bryce third, while favorite Beeker Street faded to 7th.
Full results chart from DRF 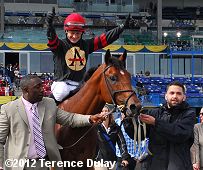 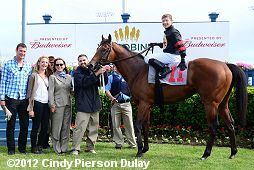 Left: Jockey Jim McAleney celebrates as River Rush heads to the winner's circle. Jim McAleney said, "This horse ran tremendous for me. Reade gave me some instruction - if you can save some ground it would really help - so opted to do as he'd suggested. We had such wonderful trip. It was just great. Absolutely (ride in the Plate). It's really exciting. If can get on a horse in a race like this with these connections and with the Stronachs and know we're not here for the sake of being here, I know I can ride the best race I can ride."

Right: River Rush in the winner's circle. Dan Duncan, representative for winning owner-breeder Stronach Stables said, "Certainly down the backstretch, it looked like he had enough horse. The pedigree of the horse indicated the distance would suit him. Ideally, the trainer and the Stronachs wished to have run him in an easier race, but time was getting tight. Everyone is ecstatic I'm certain." Trainer Reade Baker added, "(We were) hung up on the outside at 20-1 with a maiden. I thought he'd close well but I didn't think he would be that quick." 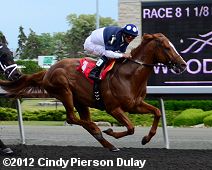 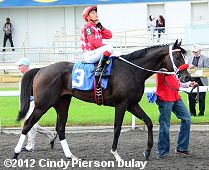 Left: Second place finisher Incredicat leads first time by. Trainer Ian Black said, "Huge. A great run. It was a big effort. He went quick the whole way. I know the track is probably very fast today and he beat all the ones we thought we had to beat and a maiden beat him. Alex (Solis) says that he'll go 1 1/4 and he doesn't have to tell me that. We'll see how he is and watch the replay and see what we do."

Right: Third place finisher Classic Bryce returns after the race. Trainer Darwin Banach said, "I thought it was fantastic. He still isn't a 100%, but in three weeks we plan on having him at 100%. The plan, since January, was to be in the Plate. That's our goal and we're sticking to it." Jockey Emma-Jayne Wilson added, "He really tried and he ran very well. With the blinkers on, Todd (trainer Pletcher) and I thought he'd be a little sharper and he was. It was good. He ran his race." 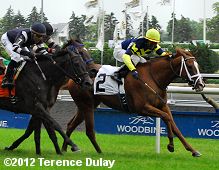 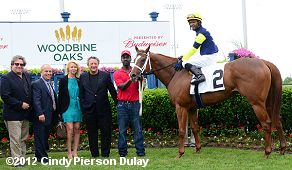 Kicking off the stakes action on Woodbine Oaks day was the $100,000 Alywow Stakes for 3-year-old fillies sprinting 6 1/2 furlongs on the turf. Jockey Patrick Husbands sent 3-1 second choice Dene Court to the lead and she set fractions of 23.16 and 46.43 over the good turf course, while pressed by 4-1 third choice Man Stuff and 3-4 favorite Tu Endie Wei. Into the lane, Dene Court continued to lead, getting 3/4 in 1:11.71, and was all out to hold off late-running 10-1 Blue Heart to get the win by a neck in 1:18.79. It was a head back to Man Stuff and late-running 9-1 Sky Dreamer who dead-heated for third, while favorite Tu Endie Wei faded badly to finish last beaten 11 1/4 lengths.

Winning jockey Patrick Husbands said, "I was trying to get away from them halfway down the lane and as we got away from them, she stopped. And when they came back, she was going again. She's all about class."
Full results chart from DRF 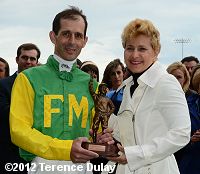 The Avelino Gomez Memorial Award, Canada's equivalent to the George Woolf Award in California and the Mike Venezia Award in New York, is a lifetime achievement award for a jockey, Canadian-born, Canadian-raised, or a regular rider here for more than 5 years, who has made significant contributions to the sport. The 2012 award went to Steve Bahen whose first career win was aboard Micheline on July 7, 1986 at Woodbine. His career highlight was winning the 2002 Queen's Plate aboard 82-1 longshot T J's Lucky Moon for Molinaro Stable. He said, "I'll never forget that moment. It's hard to believe that it's been 10 years. Time flies, but I'm happy with how things have gone. I've persevered, I've lasted." He also has two other Canadian classic wins, the 1996 Oaks with Silent Fleet, and the 1997 Breeders' Stakes with John the Magician. 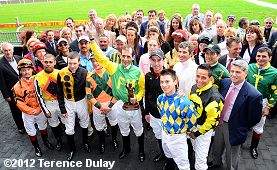 The award is presented annually on Oaks day, the anniversary of Gomez's death from complications after a three-horse spill in the 1980 running. A life-size statue of Gomez overlooks the Woodbine walking ring, and each year's honoree received a replica. Bahen said, "I didn't know Avelino, but I watched him ride when I was a kid. He was just so strong as a jockey. You hear everyone around the racetrack still talk about him. There are so many great stories. I went to Fort Erie with my Dad because he was playing in an exhibition baseball game against the jockeys. Avelino shows up in a cut-off t-shirt, cut-off shorts and no shoes. He steps up to the plate, hits one a mile and gets a home run. He crosses home plate and then just left. I must have been six or seven years old and I haven't forgotten that moment."