The feature race on Sunday at Woodbine was the $250,000 Wonder Where Stakes, the final leg of the Triple Tiara series for 3-year-old fillies foaled in Canada, however the series has only been swept once as generally the Woodbine Oaks winner goes in the Queen's Plate against males rather than the Bison City Stakes. Conditions were typical for mid September in Southern Ontario with partly cloudy skies and a race time temperature of 24 C (75 F) and the turf course rated firm (GoingStick 11.2). A field of six went to post for this 1 1/4 mile trip over the Taylor turf, with Whimsical Dance sent off as the even-money choice off her debut win on turf by 4 1/2 lengths on August 21. In to challenge her included 3-1 second choice Sister Seagull, second to eventual Queen's Plate winner Moira in the Woodbine Oaks before winning the Bison City, and 4-1 third choice Swoop to Finish, sixth in the Woodbine Oaks after breaking her maiden on the turf.

Jockey Rafael Hernandez sent 6-1 fourth choice Strega to the lead exiting the dogleg through easy fractions of 26.27, 51.69, and 1:16.82 while pressed by Sweep to Finish and stalked by 22-1 longest shot Devil's Bit. Turning for home Strega tired as Sister Seagull, fifth early, swept to the lead 5 wide through 1 mile in 1:41.35. Kept to task by Antonio Gallardo, Sister Seagull held off Swoop to Finish to win by a length in 2:04.65. It was another 2 1/2 lengths back to Devil's Bit third, and 1 3/4 more to late-running favorite Whimsical Dance fourth. 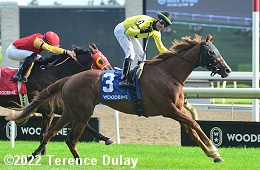 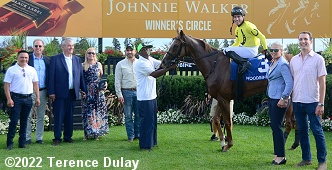 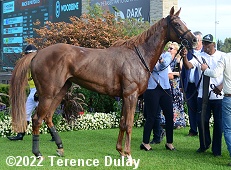 Left: Sister Seagull in the winner's circle. Winning owner-breeder Sean Fitzhenry said, "That was exciting. I figured the long stretch would help her and it did. (Winning two legs of the Triple Tiara) is a testament to what we do with our broodmares. It's a good source of pride."

Right: Sister Seagull about to be walked back to the barn. Winning trainer Catherine Day Phillips, celebrating her wedding anniversary with husband Todd said, "She's always acted like she wants to go further. Her breeding suggests turf. But she's had two tough races coming into this, so that was a little bit of a concern. She's not a big, strong filly. If you see her, she looks bigger when she's coming to the wire than she does standing beside her. She just is all heart. I'm so proud of her." 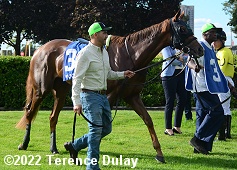 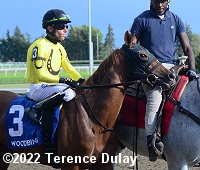 Left: Sister Seagull in the paddock before the race. Winning jockey Antonio Gallardo said, "I had to check just a little bit (at the start when bumped by Strega). But thank God it's 1 1/4 miles because you have plenty of time to figure out and pull everything together again. She's a nice filly. I liked her more today because of the distance. It's perfect for her. I feel like she's more on the bridle on the turf. Today, everything was beautiful, really easy today."

Right: Sister Seagull in the post parade with Antonio Gallardo in the saddle. 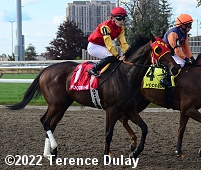 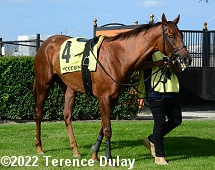 Left: Second place finisher Swoop to Finish returns to be unsaddled. The Gail Cox trainee improved her record to 1 win, 2 seconds, and 0 thirds in 6 starts, earning $110,129 for owner-breeder Sam-Son Farm. 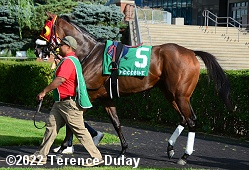 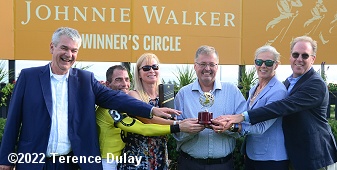