The first graded stakes of 2012 on the New York racing calendar were contested on Saturday over the winterized inner track at Aqueduct Racetrack. Conditions were overcast, and it was a relatively "warm" 47 degrees at race time at the Ozone Park oval, with the track listed as fast. The highlight race on the card was ths $200,000 Withers Stakes (G3) for 3-year-olds going 1 1/16 miles, an early Triple Crown prep on the New York road to the Derby (consisting of the Count Fleet, Withers, Gotham, and Wood Memorial). A field of 6 went to post, with Alpha sent off as the 3-10 favorite off his 2 1/2 length win in the Count Fleet last out after finishing 11th in the Breeders' Cup Juvenile. In to challenge him included 11-2 second choice Hakama, winner of two straight and making his stakes debut, and 13-2 third choice Tiger Walk, also a winner of his last 2 starts and making his stakes debut.

Jockey Cornelio Velasquez sent 10-1 How Do I Win to the lead first time past the stands and he set fractions of 23.71, 48.04, and 1:12.71 while pressed by Hakama to his outside and Alpha another length behind in third. Entering the stretch, Alpha quickly surged to the front, opening up a 4 length lead on the tiring How Do I Win. 44-1 longest shot Speightscity, 4th early, closed late to pass tiring horses but was no match for Alpha who cruised past the post 3 1/4 lengths ahead in 1:44.23. It was another 1 3/4 lengths back to late-running Tiger Walk third. 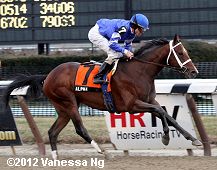 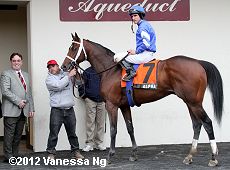 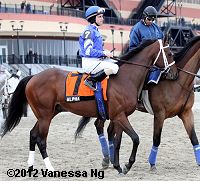 Left: Alpha in the winner's circle with trainer Kiaran McLaughlin on the far left. McLaughlin said, "He was a little wide into the first turn, looked like a couple came out into him and forced him even wider, but then on the backside he settled back in. He had to move a little bit early but he responded when asked, so it was an impressive race. It was impressive the way he finished. We were hoping he'd win like that." McLaughlin said he may go next in the Gotham or may "relocate".

Right: Alpha in the post parade. Winning jockey Ramon Dominguez said, "You always want to save ground, and after I went wide through the first turn my main goal was to try and get him to relax. I had to get him behind the horse that was directly in front of me. He switched off and relaxed to the point that I really had no idea whether I had any horse or not. I was going through the motions. When I tried to put a little pressure to start making my run, he jumped on the bridle and was pretty handy from there. He finished up nice, and the last 1/8 he was really doing it on his own and galloped out good." 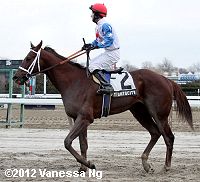 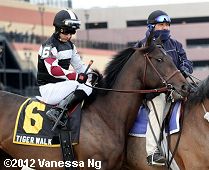 
Immediately before the Withers, a field of 7 older horses (5 betting interests) sprinted 6 furlongs in the $150,000 Toboggan Stakes (G3). The two-horse Repole Stable entry of Calibrachoa and Caixa Eletronica was sent off as the 2-5 favorite over the Michael Dubb entry of Candyman E and Flat Bold at 2-1. Dr. Disco was the 8-2 third choice on the board. Jockey Angel Arroyo sent 19-1 longest shot Diski Dance to the lead and he set fractions of 23.35 and 46.07 while 1 1/2 lengths ahead of Calibrachoa who stumbled at the start but quickly recovered. On the turn, Calibrachoa moved up to challenge, gaining the lead at the 3/16 pole Calibrachoa drew off through the final furlong to win by 2 1/4 lengths in 1:09.47. It was just 3/4 back from pacesetter Diski Dance to late-running Caixa Eletronica third. 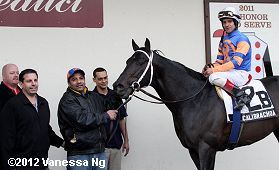 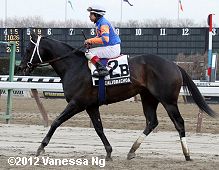 Left: Calibrachoa in the winner's circle with owner Mike Repole on the far left. Winning trainer Todd Pletcher said, "After he got up from that stumble, he recovered into a good position and got a good trip from there. We'll look at the Tom Fool. He's so good at Aqueduct we have to look at it."

Right: Calibrachoa returns after the race. Jockey Cornelio Velasquez said, "First jump out of the gate, he stumbled, but he stayed in the race. I stayed right there in second easy, and waited until the last 3/16. I asked him, and he passed. I had a lot of horse. He was the best horse in the race." 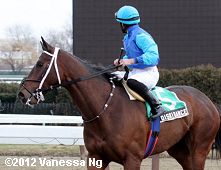 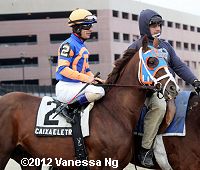 Left: Second place finisher Diski Dance returns after the race. The 19-1 longest shot led for the first 1/2 mile under jockey Angel Arroyo, but was no match for the winner. The Cathal Lynch trainee improved his record to 5 wins, 6 seconds, and 0 thirds in 14 starts, earning $170,360 for owner Two Hands LLC.

Right: Third place finisher Caixa Eletronica heads out for the post parade. Owner Mike Repole said, "Caixa got caught, trapped a little there, but we'll take 1-3 any day. We'll look at the New York graded stakes from now on. Obviously there's the Carter and the Tom Fool next. He loves Aqueduct. But he's run well at Belmont and run well at Saratoga. You guys know how much I like New York, so we keep him here."

Kicking off the stakes action on Saturday was the $100,000 Correction Stakes for older fillies and mares sprinting 6 furlongs on the inner track. 4-1 second choice Winning Image battled for the lead with 9-1 Golden Mystery through a quarter in 23.18 and a half in 46.78 before tring badly at the 3/16 pole. 1-2 favorite Nicole H, who stalked the pace third early, easily took command from the tiring pacesetters, drawing off to win by 2 1/2 lengths over 23-1 Honchis'n Ponchis in 1:11.08. It was another length back to Golden Mystery third. 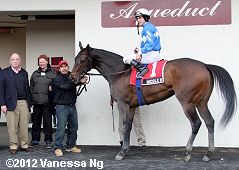 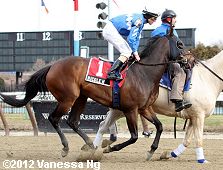 Left: Nicole H in the winner's circle with trainer Mike Hushion on the far left. Hushion said, "I thought (Dominguez) was going to be fine getting out of there because (Golden Mystery) seemed to want to get out around the turn. Cornelio (Velasquez aboard Golden Mystery) race-rode my horse pretty strong. It was good riding, but you hope the best horse makes the trainer and jockey look pretty smart. We've always felt she was one of the best fillies in the country. We have the rest of the year to prove it."

Right: Nicole H in the post parade. Winning jockey Ramon Dominguez said, "I was actually trying to work my way out from the 1/2 mile to the 3/8 pole, but unfortunately, horses kept coming to my outside, and really, I was left with no choice. I felt like I had enough horse and she was handy enough where even if the horse in front had come in, even in a split-second, I had the horse to get inside or outside. I would have rather been tracking on the outside, but I was very happy about the way she was taking me. When she finally got through, she continued going. She was a lot handier than last time." 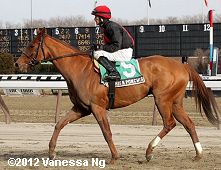 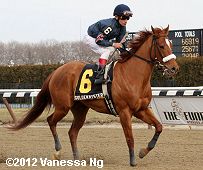 Left: Second place finisher Honchis'n Ponchis returns after the race. The 23-1 shot settled in 5th early under jockey David Cohen then passed tiring horses late to get second beaten 2 1/2 lengths. She improved her record to 4 wins, 11 seconds, and 3 thirds in 29 starts, earning $277,712 for owner-trainer Dale Romans.

Right: Third place finisher Golden Mystery in the post parade. The 9-1 fourth choice pressed the pace under jockey Cornelio Velasquez but tired in the final furlong to get third beaten 3 1/2 lengths. The Tony Dutrow trainee improved her record to 7 wins, 2 seconds, and 4 thirds in 28 starts, earning $278,073 for owner Farnsworth Stables.