The older handicap division was back in action on Saturday at Saratoga with the Grade 1 Whitney Handicap. A field of eight faced the starter in this nine-furlong event, with Medaglia D'Oro sent off as the 4-5 favorite. Also in the field were Breeders' Cup Classic winner Volponi as the 3-1 second choice, as well as past Triple Crown combatants Proud Citizen and Saarland.

The longest shot on the board, Northern Rock at 28-1, set the early pace while Jerry Bailey kept the favorite at his flank through fractions of 23.53, 46.81, and 1:10.47. At the top of the stretch, Northern Rock began to fade to an eventual fifth place finish, while Medaglia d'Oro was just getting into gear. With a furlong to go, the favorite surged ahead to the lead while Jose Santos aboard Volponi, coming from fourth early, drew almost even with him. But in deep stretch, Medaglia d'Oro outfinished Volponi to win by a length in a final time of 1:47.69 over the fast main track. It was another 1 1/4 length back to the late running Evening Attire. The win was Jerry Bailey's fifth on the card. 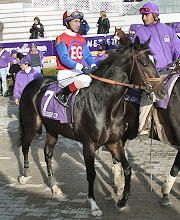 Trainer Bobby Frankel said, "He had been training well up to this race. I wanted to win this race. And then I wanted to win it more when I read in the papers than my horse was `all hype.' After he won the Travers (last year), I started thinking about this race. I was going to have one race before this - the Stephen Foster - but he had a little accident, which might have been a blessing. I thought there was a chance that Medaglia was going to be beat, but the horse dug in hard.

Winning jockey Jerry Bailey said, "He's a free-running horse. Bobby (Frankel) told me he was 100 percent fit and ready. I knew when I asked Medaglia the question `if he was ready?' I was going to find out pretty quick. He gave it to me, and gave me everything he had. The juggernaut Bobby's got -- it seems like they are all stakes horses. Every time he leads one over there, they are 3-5 or 6-5. This was a real impressive effort from Medaglia d'Oro. At this place (Saratoga), any horse can jump up and beat you at any time." 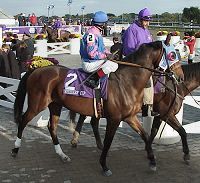 Phil Johnson, trainer of second place finisher Volponi said, "He's a natural 1 1/4-mile horse, and I wouldn't duck (Medaglia d'Oro) again going a mile and a quarter. He was a little wild going down the backstretch. He was all over the place. But he does that sometimes, and I think he's just looking for a place to run. I've nominated him for the Saratoga Breeders' Cup, but we'll see how he feels up until then. The main goal is the Meadowlands' Cup and the Breeders' Cup Classic." 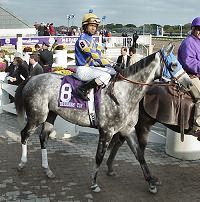 Pat Kelly, trainer of third-place finisher Evening Attire, said, "I would have preferred it to be sloppy or muddy. I was very close to scratching him. He ran a super race. I'm glad we got a check. It seems like he and (jockey Mark) Guidry got along well together. I don't know if we'll try the Saratoga Breeders' Cup. He just fired two big shots."
More on Saratoga