The $750,000 Whitney Stakes (G1), run at 1 1/8 miles over the main track, is the premier contest at Saratoga for older horses and is a Breeders' Cup Challenge "Win and You're In" race earning the winner automatic entry into the Classic (G1). Conditions were ideal with the main track fast and turf courses firm under sunny skies and temperatures in the mid 80's. New York racing continues to be conducted with no spectators and just essential personnel onsite. Despite the lack of spectators, a new Whitney Day record handle of $35.8 million was bet on the 12 race card, beating the record of $31.8 million set last year.

A short field of just 5 made final entry, with Tom's d'Etat sent off as the even-money favorite, winner of 4 straight including the Stephen Foster (G2) last out at Churchill Downs. In to challenge him included 5-2 second choice Code of Honor, third in the Metropolitan Handicap (G1) after winning the Westchester (G3), and 3-1 third choice Improbable, winner of the Hollywood Gold Cup (G1) at Santa Anita.

Jockey Junior Alvarado sent 29-1 longest shot Mr. Buff to the front first time by through fractions of 25.12, 49.74, and 1:13.36 while pressed by Improbable and stalked by 11-2 By My Standards. Turning for home Mr. Buff tired as Improbabe inherited the lead through 1 mile in 1:36.53. Kept to task by Irad Ortiz Jr., Improbable easily held off By My Standards to win by 2 lengths in 1:48.65. It was another 1/2 length back to late-running favorite Tom's d'Etat third. 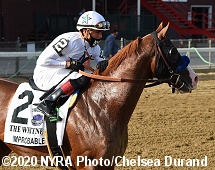 Left: Improbable in the winner's circle. Winning jockey Irad Ortiz Jr. said, "Finally, he's grown up a little bit. He turned into a nice horse. Mr. Baffert did a great job with him. He broke really good today. Honestly, I just took a little hold. I know Mr. Buff, he's the speed of the race and I sat second. Last time, [Drayden] Van Dyke rode him second in the clear and he ran so good, so I just tried to do the same thing. He's been like that since he was two or three. We know him so I was ready for it. The starter did a great job. He stuck with the horse, he fixed it. Thank God everything broke well. We had a beautiful trip."

Right: Improbable returns after the race. Ortiz Jr. added, "He got up really quick and he put me in the race. I just took a little hold because Mr Buff looked like the speed of the race. I put him in second in the clear, like we wanted and went from there. He was comfortable. By the backside, we felt pressure but by his own he started picking it up. I let him do his thing because they were going really slow so I let him go early. When I asked him turning for home, he responded really well." 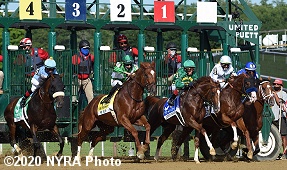 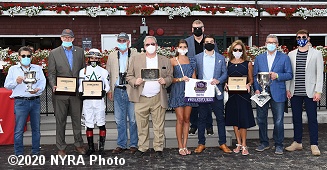 Left: The horses break from the gate for the Whitney with favorite Tom's d'Etat on the far left. Jockey Joel Rosario said, "He stumbled coming out. There was a lot going on. He was standing fine, he just missed the break. The horse to the inside of him was moving a little bit, he was straight, he just stumbled a little bit. It changed my plan because I had to really get riding from there. I couldn't take my time. I thought the pace was fine. Even after that, I was not too far from the lead. It looked like I was in a good spot. But stumbling coming out of the gate, I lost ground right away."

Right: The trophy presentation for the Whitney. Elliott Walden, CEO of winning co-owner WinStar Farm said, "He's always got a little blowup in him and then he settles down. He broke great, Irad had him in a super position and felt great all the way around there. Bob [Baffert] had him ready to go, as usual, when he comes east. When he got in the position that we had hoped for, which was kind of tracking Mr. Buff, we felt really good. Then they throw up kind of easy fractions. But, he's just a different horse this year. That's his second Grade 1 in a row. He got beat by Tom's d'Etat in his first start at Oaklawn, but he's set up for a big year and we're just excited to continue that. He's been so consistent throughout his career. The horse is a fabulous racehorse and the best is yet to come." 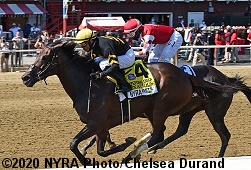 Kicking off the stakes action on Saturday was the $500,000 Personal Ensign Stakes (G1) with a field of 5 older fillies and mares going 1 1/8 miles looking for automatic entry into the Breeders' Cup Distaff. Fleur de Lis (G2) winner and Saudi Cup runner-up Midnight Bisou was sent off as the 3-10 favorite over 7-2 Point of Honor, second in the Ogden Phipps (G1), and 19-2 Vexatious, second in the Ruffian (G2).

Jockey Irad Ortiz Jr. sent 14-1 Motion Emotion to the lead first time by and she set fractions of 24.15, 48.36, and 1:12.20 while pressed by Vexatious and stalked by 19-1 longest shot Abounding Joy. Turning for home Motion Emotion tired as Vexatious inherited the lead through 1 mile in 1:36.29. Midnight Bisou, 4th early, put in a strong late rally but Vexatious, confidently ridden by Jose Lezcano, held her off to win by a neck in 1:48.82. It was a long 6 1/4 lengths back to Point of Honor third.
Results Chart 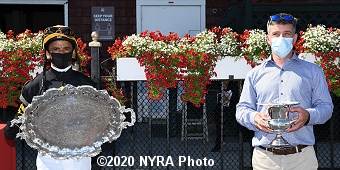 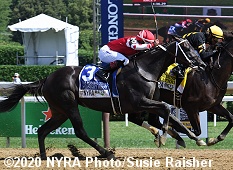 Left: The trophy presentation for the Personal Ensign. Winning trainer Jack Sisterson said, We started off the year in allowance races and allowed her to improve, and she deserves it. It's a whole team effort and I have a lot of people to thank. It's a great win whether at Belterra or Saratoga. It's our first win at Saratoga, so it's cool that it's a Grade 1 with the history behind this race. We were worried coming back in three weeks. We put this race in her hands and let her tell us she was ready to come back, and three weeks later she told us that she was ready to run. Physically, she looked great and worked well last week. She's answered every question."

Right: Second place finisher and beaten favorite Midnight Bisou at the finish. Co-owner Jeff Bloom said, "When [Vexatious] came out and [Lezcano] was still hitting her left-handed, it looked like it stopped our filly's momentum enough at that point. Then they came out one more time and it wasn't massive but, to me, it looked like it was a momentum shift in a crucial point of the race. She ran a huge race. She barely lost the race. She's just a remarkable race mare. I think what happened in the race definitely caused a shift in momentum. Is it disappointing to lose? Of course it is. You want to win all of them. They don't give Grade 1 races away. You've got to go out there and do it. The filly that beat us is a really nice filly." 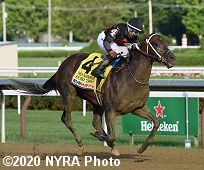 Jockey Luis Saez sent No Parole to the lead out of the chute through fractions of 22.67 and 45.31 while pressed by 7-1 Eight Rings and stalked by Mischievous Alex and Tap It to WIn. On the far turn No Parole tired as Tap It to Win moved up to gain the lead through 3/4 in 1:09.86. 7-1 Echo Town, 5th early under Ricardo Santana Jr., came out 5 wide for room and rallied to win going away by 3 1/2 lengths in 1:22.53. It was another 1/2 length back to 18-1 Shoplifted third, while favorite and pacesetter No Parole faded to 9th.
Results Chart

Echo Town in the winner's circle. Winning trainer Steve Asmussen said, "I thought Echo Town ran the race of his life and Shoplifted, who was second in the Hopeful last year here obviously likes this track. It was great to see him put it all together when it matters so much on this stage. He ran solidly here. He ran really well into the Woody Stephens, but I thought the timing of this race was better. He's run hard all year. He's run consistently all year. Now, he will be noticed." Jockey Ricardo Santana Jr. added, "He broke really sharp today and when the dirt started hitting him in the face, he was jumping a little bit but he was really comfortable. I took him outside and he gave me a nice kick at the end. He was travelling really well. I knew there was plenty of speed today and I just wanted to sit behind the speed. I'm really happy with the horse." 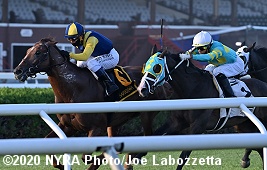 The $250,000 Bowling Green Stakes (G2) featured a field of 6 older horses going 1 3/8 miles around 3 turns of the inner turf course. Manhattan (G1) third place finisher Sadler's Joy was sent off as the 8-5 favorite over 2-1 Cross Border, winner of the Lubash Stakes after finishing 5th in the Manhattan, and 5-1 Dot Matrix, 8th in the Manhattan.

Jockey Irad Ortiz Jr. sent 11-2 fourth choice Marzo to a clear lead first time by through fractions of 25.30, 50.38, 1:15.68, and 1:40.04 while stalked by Dot Matrix and 6-1 Channel Maker. Turning for home, Marzo continued to lead through 10f in 2:03.10 before tiring. Sadler's Joy, 5th early under Javier Castellano, and Cross Border, 4th early under Jose Ortiz, rallied down the lane and bumped at the 1/16 pole, before Sadler's Joy finished a neck in front in 2:14.77. It was another length back to 23-1 longest shot Highland Sky third. Ortiz and trainer Tom Albertrani claimed foul against Castellano for interference. After review the stewards ruled that Sadler's Joy interfered with both Cross Border and 4th place finisher Channel Maker, so Sadler's Joy was disqualified and placed fourth.
Results Chart 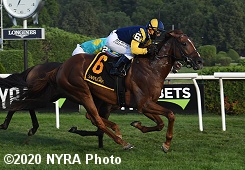 First place finisher and favorite Sadler's Joy disqualified to 4th crosses the finish. Jockey Javier Castellano said, "You could see I hit the hole when it opened and I saw the [other] horse, but I never came over. We were all on the same line and I think the inside horses was involved a little bit and we all ended up caught in an overreaction. Of course, that put everyone under pressure and they were going to blame the horse on the outside [Sadler's Joy]. It was a decision for the stewards." 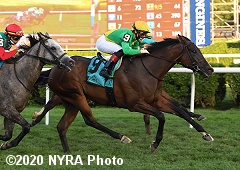 The final race of the card was the $200,000 Caress Stakes for older fillies and mares sprinting 5 1/2 furlongs on the Mellon turf course. Dalika was sent off as the 9-5 favorite over 4-1 Cariba and 13-2 I'llhandalthecash.

Winning trainer Christophe Clement said, "This filly came from (recently retired) Kiaran McLaughlin, and Kiaran was very helpful when she came to us in the winter. She came in great shape, and she keeps getting better. She's got black type now. She belongs to a wonderful man, Everett Dobson of Cheyenne Stables. He is an owner-breeder, so this is very meaningful for him because down the line she is going to be expected to be a broodmare. As usual, we are delighted. Irad gave her a great ride, and life is good. I thought there was two or three speeds and I didn't think we could be in the first two, so I said to be aggressive and get a position third or fourth because we had a bad draw and you don't want to be caught in the back in traffic and everything. He gave her a perfect trip. It's always nice when it works out."
Results Chart