The $750,000 Whitney Invitational Handicap (G1), run at 1 1/8 miles over the main track, is the premier contest at Saratoga for older horses and is a Breeders' Cup Challenge "Win and You're In" race earning the winner automatic entry into the Classic (G1). 33,148 fans were on hand under sunny skies and temperatures in the high 70s. Defending champion and Breeders' Cup Classic winner Fort Larned was sent off as the 6-5 favorite in the field of 8, off his win in the Stephen Foster Handicap (G1) at Churchill Downs. In to challenge him included 7-2 second choice Cross Traffic, a close second in both the Westchester (G3) and Metropolitan Handicap (G1), and 6-1 third choice Successful Dan, fourth in the Foster after winning the Ben Ali (G3)

Jockey John Velazquez sent Cross Traffic to the lead immediately and he set fractions of 24.17, 47.28, and 1:10.24 over the fast main track while pressed by Fort Larned and 8-1 Mucho Macho Man. At the top of the stretch, Fort Larned tired allowing Cross Traffic to open up a 2 length lead through 1 mile in 1:34.80. Successful Dan, seventh early, had to come out 6 wide into the lane for room and closed with a rush but Cross Traffic easily held him off by 3/4 length to win in 1:47.89. It was another 1 1/2 lengths back to Mucho Macho Man third, while Fort Larned checked in fifth. 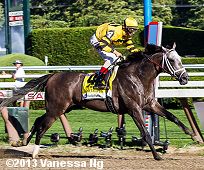 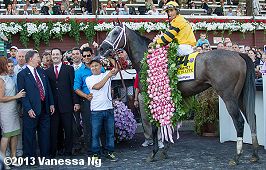 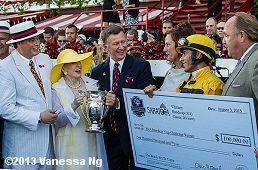 Left: Cross Traffic in the winner's circle. Trainer Todd Pletcher said, "The plan was to let him run to the first turn. Being outside of Mucho Macho Man and Fort Larned, the other two speeds, we felt like we were in a good position. It worked out really well. We got a great run into the first turn. The first 1/4 was key. Johnny was able to get to the position he wanted without overdoing it, and kind of picked it up from there. It was a strongly run race throughout, and we were just hoping he could hold on the last part after the two losses we had at Belmont. Turning for home, I thought we had a big shot, but I was still wanting to get there."

Right: Marylou Whitney presents the trophy for the Whitney Handicap to owner T. Paul Bulmahn. Trainer Todd Pletcher added, "This was a real quality-filled race. To beat the Breeders' Cup winner and runner-up from last year and some really good horses speaks volumes about his quality. It was great to see him win. He certainly deserved a Grade 1 after the Met Mile. I know we've had a couple of tough beats over the years but that one kind of stands out as one of the toughest." 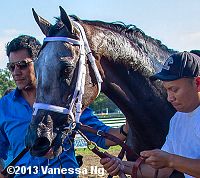 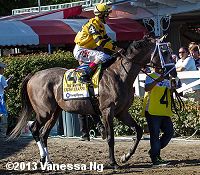 Left: Cross Traffic heads back to the barn after the race. Jockey John Velazquez said, "It worked out perfect, the way we wanted. He broke well from the gate, and that was our plan: break well, get a nice run into the first turn and see where we land. We landed on the lead in a nice pace, so it was perfect. The first 1/4 was the most important one; we didn't have to chase him to be there. After that, we started picking it up every 1/8 mile, but it was a comfortable pace. It wasn't a very fast pace, so he was doing it easy and comfortable. I felt comfortable the way he was going."

Right: Cross Traffic heads out for the post parade. Velazquez added, "Believe me, I thought I had horse because he opened up another length and he started waiting again. I moved outside again and when he's all by himself he waits, so I had to move to the middle of the track a little bit and come back to the inside. The last 20 yards I saw the other horse in the middle of the track. I don't think my horse saw him. It was a great effort for him." 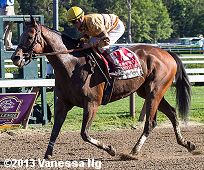 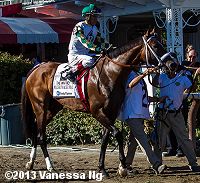 Left: Second place finisher Successful Dan. Trainer Charles LoPresti said, "I'm happy. He ran his race the way I thought he'd run. It's unfortunate that happened (the fall before the race_, but I don't think that took anything away from him. He was really running at the end. I told my nephew around the 3/8 pole he was picking up horses left and right. I knew he was going to run his race, and he did."  On Successful Dan falling down during the parade fom paddock to track, "When he took the halter off he sucked back, and he crossed his back legs and fell over sideways. He didn't flip over. He crossed his footing and fell sideways. I did not see it."

Right: Third place finisher Mucho Macho Man. Jockey Edgar Prado said, "I had a beautiful trip. He broke good and he ran behind the speed. I think I was in a great spot the whole way around. When I called on my horse, he responded well, and he was gaining ground, but unfortunately the horse in front didn't stop quick enough." 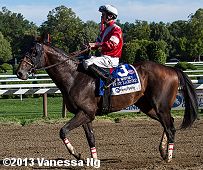 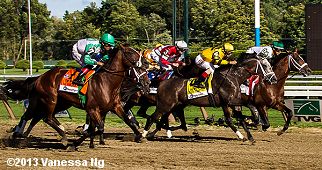 Left: Fifth place finisher and beaten favorite Fort Larned returns after the race. Jockey Brian Hernandez Jr. said, "We had a clean trip on the outside. We followed the winner the whole way. We really had no excuse from the 1/8 pole home. I kind of engaged him early to push the horse on the lead on because he was going a little slow, and then he just outkicked us turning for home." Trainer Ian Wilkes added, "He just walked out of the gates. It wasn't the start we were looking for. He got away bad. He got a good trip on the outside. All hats off to the winner. He's run over this track before, there's no excuse there. It was one of those days. We'll fight another day."

Right: The field of the Whitney Handicap shortly after the start. 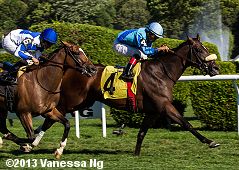 The first stakes race on the card was the $100,000 De La Rose Stakes for older fillies and mares going 1 mile on the inner turf course. Laugh Out Loud was sent off as the 7-5 favorite off her 6th place finish in the Just a Game (G1), over 5-2 second choice Ruthenia, third in the Eatontown (G3), and 9-2 third choice Baffle Me, second in the Fairy Garden. Baffle Me and 16-1 Open Water dueled for the lead through fractions of 23.32, 46.10, ad 1:09.94 over the firm course while stalked by 23-1 Assateague. Into the stretch the pacesetters tired from their prolonged battle, allowing Assateague to inherit a 1 1/2 length advantage midstretch. Ruthenia, 7th early, unleashed a strong rally but Assateague held her off by 1/2 a length in 1:34.45. It was another 1 1/4 lengths back to favorite Laugh Out Loud third.
Results Chart 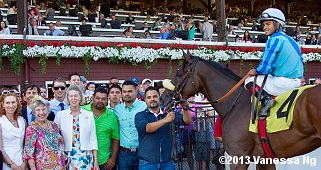 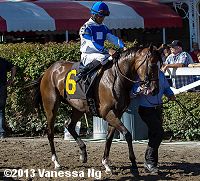 Left: Assateague in the winner's circle. Winning trainer Michael Matz said, "She ran great. We are so pleased with her. We knew she would be close to the pace. We were hoping she wouldn't get into a speed duel. She stumbled a little bit at the beginning, so, that may have helped her a little bit. Luis (Saez) did a terrific job in settling her. He got her to relax in a perfect spot. I couldn't ask for anything better than that. The last time he rode her in New York, she broke on the lead, but he got her to relax so much." 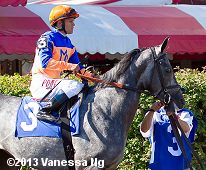