The $750,000 Whitney Invitational Handicap (G1), run at 1 1/8 miles over the main track, is the premier contest at Saratoga for older horses and is a Breeders' Cup Challenge "Win and You're In" race earning the winner automatic entry into the Classic (G1). 30,841 fans were on hand under overcast skies and temperatures in the low 90s. Santa Anita (G1) and Stephen Foster (G1) Handicap winner Ron the Greek was sent off as the 5-2 favorite in the field of 9. In to challenge him included 7-2 second choice Hymn Book, second in the Suburban Handicap (G2) last out, and 4-1 third choice Flat Out, off his second place finish in the Monmouth Cup (G2).

33-1 longest shot Endorsement was sent to the front by jockey Joel Rosario and he set fractions of 23.42, 46.97, and 1:10.86 over the fast track, while pressed by 6-1 fourth choice Trickmeister and 7-1 fifth choice Fort Larned. Entering the stretch Endorsement tired while Fort Larned surged to the lead, opening up a 4 length advantage mid-stretch through 1 mile in 1:34.80. Favorite Ron the Greek, last for the first 5/8 mile, put in a strong late rally but was left with too much ground to recover as Fort Larned held him off by 1 1/4 lengths in 1:47.76. It was just a head back to Flat Out third. 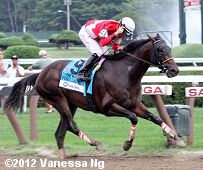 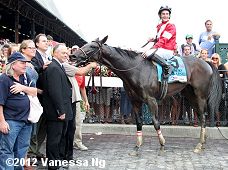 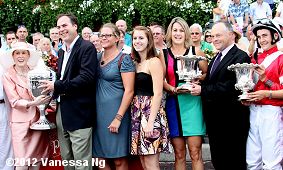 Left: Fort Larned in the winner's circle. Winning trainer Ian Wilkes said, "It's a huge honor to win the race named for the Whitneys. I was very pleased. Brian did a tremendous job; first time over this track. He rode a perfect race and moved him at the right time. He put some open lengths between him and the closers. You couldn't let the closers get to you. He's been around for a while, and he's a good young rider. This is a free-running horse. He can do a lot of things. I always thought he belonged [up there] in the division. You question yourself coming off a race like the Stephen Foster; you got beat, you got your head handed to you there. So you question yourself. But this horse keeps rattling off those 108 Beyer Speed Figures. He stays consistent. Let's enjoy today. Obviously, you've got the Woodward, but let's see how he comes out of this." 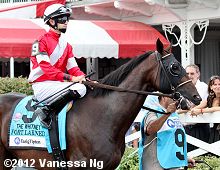 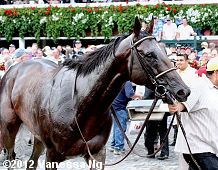 Left: Fort Larned heads out for the post parade. Jockey Brian Hernandez Jr., celebrating his first Grade 1 win, said, "On the second turn I knew I had a lot of horse. I just stayed out of his way and he toted us around there and took us home. We all just had a lot of confidence in him knowing he would run this kind of race today. He's kind of a horse where you need to stay out of his way. After they put the blinkers on him he's gotten a little more forward. If you just grab a long line on him and let him do his thing he seems to run better. He got to (Trickmeister) pretty easily, and when he got by him as fast as he did I got him to switch leads and hit him a couple times left-handed. From there it was all him."

Right: Fort Larned heads back to the barn after the race. 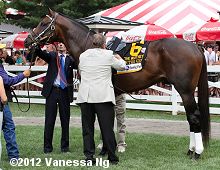 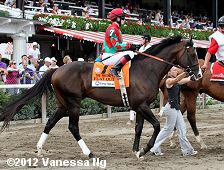 Left: Second place finisher and beaten favorite Ron the Greek in the paddock. Trainer Bill Mott said, "I think we got parked out a little bit on the turn. Last time he had an inside trip and got up by a nose. Today he went around and it cost him that length." Jockey Jose Lezcano added, "I rode this horse the whole way. I had a lot of horse. I couldn't take away his momentum [by trying to find a better path off the far turn]. The winner was very good. The only thing is I had to go wide."

Right: Third place finisher Flat Out heads out for the post parade. Jockey Rosie Napravnik said, "He ran excellent; he ran his race. We were a little wide coming off the turn, but he came down the lane with a strong run." Bill Mott, who trains the 2nd and 3rd place finishers, added, "Both horses ran excellent. They were head and head coming down the lane, and both horses ran well and tried hard."


The co-feature on Whitney day is the $300,000 Prioress Stakes (G1) for 3-year-old fillies sprinting 6 furlongs on the main track. Ms. Preakness Stakes winner Agave Kiss was sent off as the 9-10 favorite in the field of 6 off her disappointing 5th in the Victory Ride (G3) at Belmont, over 3-1 second choice Judy the Beauty, second in an allowance at Churchill last out, and 5-1 third choice Emma's Encore, winner of the Victory Ride.

Jockey Ramon Dominguez sent favorite Agave Kiss to the lead down the backstretch and she set fractions of 22.15 and 44.64 while as many as 2 lengths in front of Judy the Beauty and 11-2 fourth choice Tu Endie Wei stalking her in second and third. Agave Kiss led to the 1/8 pole through 5 furlongs in 56.63, but Emma's Encore, last early, and Judy the Beauty passed the favorite at the 1/16 pole and hit the line together, with Emma's Encore holding off Judy the Beauty by a nose in 1:09.35. It was another 1 3/4 lengths back to Agave Kiss third. 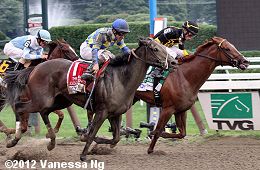 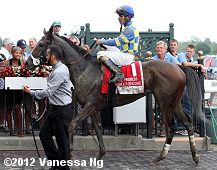 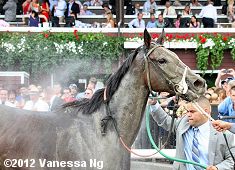 Left: Emma's Encore in the winner's circle. Her trainer Allen Jerkens said, "Like the old days. We get to have a (painted) jockey (statue) in front of the clubhouse. I always liked to get a jockey in front of the clubhouse. Winning never gets old. In the morning, when you don't see anything good in your barn, it gets old. I think she improved a little (Victory Ride). She had to run her very best. Everything has to go well. The horse has to run good, the horse has to be good, has to be fit enough. She really had to run today. Nothing was in her favor today, looking at the late scratch. It looked like speed was holding on pretty good."

Right: Emma's Encore gets hosed off after the race. 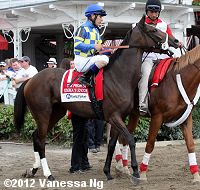 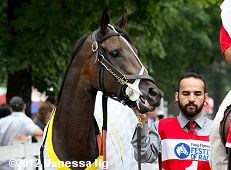 Left: Emma's Encore heads out for the post parade. Her jockey Junior Alvarado said, "After she won the Victory Ride, I was really confident in her. She broke really good again. I got her to settle and feel comfortable in the race. We tried to save ground because I knew we were going to be running late. Turning for home, she was moving, but we were wider than I wanted to be. She gave me a really nice kick at the end. She ran really hard to win that race. Approaching the wire, I knew we had it. These last two races have really worked out well for us."

Right: Emma's Encore in the paddock. 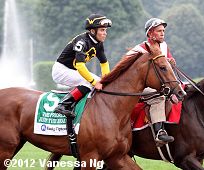 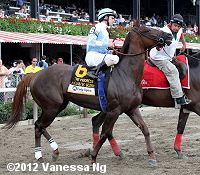 Left: Second place finisher Judy the Beauty in the post parade. Jockey Joel Rosario said, "It's not easy to win, but she ran great. The horse that beat me she's a nice horse too. I never thought she would get to me but she did. But my filly is really nice and I think if she goes a little further she will be even better. I could tell (Emma's Encore) was coming on the outside. I had just passed the horse on the inside and I knew she was coming fast, but my filly still ran great." 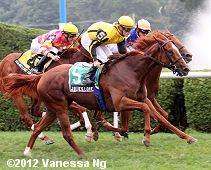 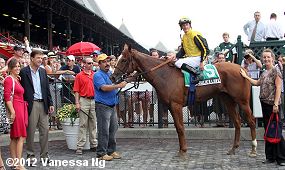 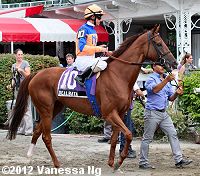 Left: Julie's Love in the winner's circle. Her trainer Graham Motion said, "Today she ran by far the most professional race that she's run. She behaved so well. She's quite a nervous filly and just everything went really smoothly. Julien really gave her a great trip; it couldn't have set up better. I felt really good the whole way down the backside. They were going quick enough, and it just worked out beautifully." Jockey Julien Leparoux added, "That was perfect. I got her to relax very good, and she came on very impressively. As long as she's relaxed, she can be in front, or come from behind; it doesn't matter as long as she doesn't get into a fight."