One of the highlight races of the Saratoga season is the $750,000 Whitney Handicap (G1), featuring some of the top older horses of the east going 1 1/8 miles on the main track. After Asiatic Boy scratched, a field of six went to post on Saturday afternoon before 39,568 fans in attendance. Gulfstream Park Handicap winner Smooth Air was the 2-1 favorite, exiting 2 straight runner-up finishes in the Metropolitan Handicap at Belmont Park and the Salvator Mile at Monmouth. In to challenge him included 5-2 second choice Commentator, trying to win this race three years in a row, after winning the Kashatreya in his last start, and 7-2 third choice Dry Martini, winner of the Suburban last time out.

Jockey John Velazquez sent defending champion Commentator to the lead right away and he set fractions of 23.49, 46.38, and 1:10.11 over the fast main track, while as many as 2 lengths ahead of 10-1 Tizway and favorite Smooth Air who battled for second. Entering the stretch, 19-1 longest shot Bullsbay, who raced in fourth for the first 3/4 mile, came out three wide to take over the lead getting the mile in 1:35.14. 4-1 fourth choice Macho Again put in a strong rally from last down the center of the track but was no match for Bullsbay, who drove clear to win by 1 1/2 lengths in 1:48.12. It was another 1 1/2 lengths back to pacesetter Commentator third, while favorite Smooth Air tired through the stretch to finish last. 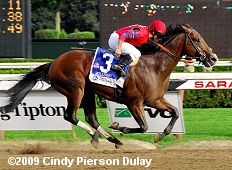 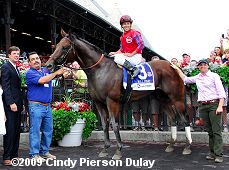 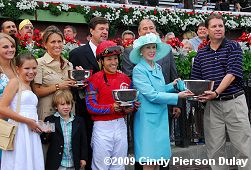 Left: Bullsbay in the winner's circle with trainer H. Graham Motion on the left. Motion, celebrating his first Grade 1 win on dirt, said, "Nobody's mentioned him all week. It's tough to beat a horse like Commentator. This horse is underrated. Jeremy made the lead too early. He's that good. He beat Macho Again (Alysheba Stakes) and Macho Again came back to beat him (Stephen Foster Handicap). It's such a thrill to win this race, especially for a turf trainer."

Right: Marylou Whitney presents the trophy for the Whitney Handicap. 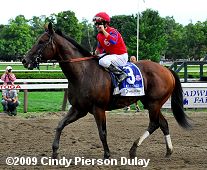 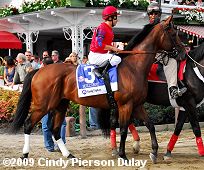 Left: Jockey Jeremy Rose celebrates as Bullsbay returns after the race. Rose said, "Today was beautiful. He fired on all cylinders; Graham had him ready, and it was a perfect trip. I made the lead way too early, but I couldn't help it. He was just cutting through traffic way too easy. I didn't want to go that early, but I had to go with the horse." 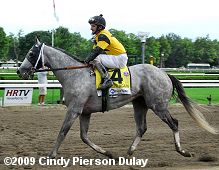 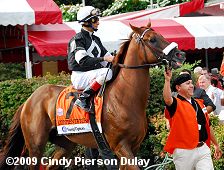 Left: Second place finisher Macho Again returns after the race. His trainer Dallas Stewart said, "I thought he ran well. It was a good, clean trip. Robby (Albarado) gave him a good ride. When I saw him go wide and coming down the stretch, I was starting to holler. It was just one of those things where he got outrun today. There's really no excuse."

Right: Third place finisher Commentator heads out to the track before the race. His trainer Nick Zito said, "Father Time catches up to everyone. He tried. He gave it everything he had. There were a lot of great trainers and a lot of great horses in the race. I wish we could have done things a little differently leading up to the race. We were playing catch up. He was coming off two months off after a New York-bred race. Bullsbay always runs a good race. It's up to (owners) Mr. and Mrs. (Tracy) Farmer, but it is my wish to retire him." His jockey John Velazquez added, "It was just a little too fast for him. We had those two horses chasing the whole way and it just didn't work out for us. I think there's plenty left in (Commentator). He was sharp enough to get out away from the other horses but the pace was just too fast." 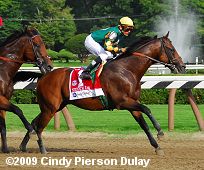 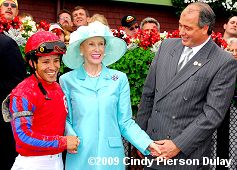 Left: Last place finisher and beaten favorite Smooth Air broke first but faded badly at the end. The 2-1 favorite stalked the pace in 3rd saving ground around both turns under new jockey Jose Lezcano, but tired entering the stretch to finish 6th and last beaten 8 1/2 lengths. The Chad Brown trained son of Smooth Jazz out of French Deputy mare Air France has a record of 6 wins, 5 seconds, and 3 thirds in 17 starts, earning $1,117,200 for owner-breeder Mount Joy Stables.

Right: Jockey Jeremy Rose with Marylou Whitney and her husband John Hendrickson in the winner's circle.


The co-feature on Whitney day was the $300,000 Test Stakes (G1) for three-year-old fillies sprinting 7 furlongs on the main track. Cat Moves, undefeated in 3 lifetime starts including the Prioress last time out, was sent off as the 6-5 favorite in the field of 8 over 3-1 second choice First Passage, winner of three straight stakes races at Calder including the Azalea in her last start, and 9-2 third choice Flashing, third in the Mother Goose to Rachel Alexandra last out after winning the Nassau County.

6-1 fourth choice Heart Ashley was allowed an uncontested lead of as many as 2 1/2 lengths while setting a pace of 22.63, 45.31, and 1:09.37, with Cat Moves and Flashing stalking her down the backstretch. Heart Ashley led to mid-stretch but tired badly, as Flashing took over late and drew clear through the final 1/16 mile to win by 1 1/2 lengths over late-running 13-1 Pretty Prolific in 1:22.40 over the fast track. It was just a neck back to Cat Moves third, who nosed out deep closer First Passage in fourth. 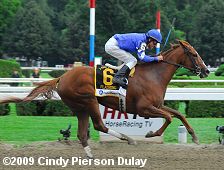 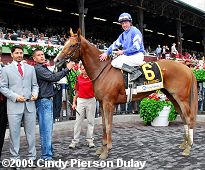 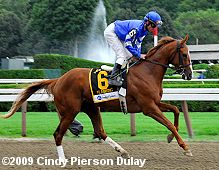 Left: Flashing in the winner's circle with trainer Saeed bin Suroor on the left. Suroor said, "This filly is tough. The last race (against Rachel Alexandra) was hard for her. Seven furlongs suits her a lot. We told (Migliore) to get good position. I knew how (Cat Moves) likes to go fast. I told Richard to sit in fourth, but she's not happy too far back." 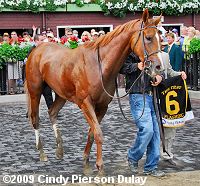 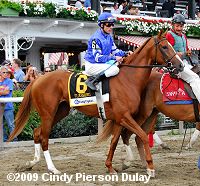 Left: Flashing heads back to the barn after the race.

Right: Flashing goes onto the track before the race. Her jockey Richard Migliore said, "She didn't pull excessively hard; she tried me once down the back(stretch) and I was firm with her and then she let go of the bridle again and traveled beautifully until I called on her. She's a filly that tends not to run the turns as well as the straights, so when I was able to maintain my position (around the turn) without really getting after her to do it, I said 'Well I know I can make up these 4 lengths when we turn in.' When she switched her right lead, she went and got them." 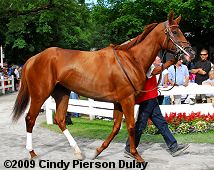 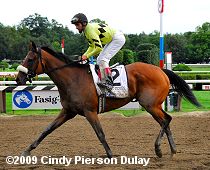 Left: Second place finisher Pretty Prolific in the paddock before the race. The 13-1 shot raced in midpack fifth early under jockey Robby Albarado, came out three wide into the stretch and finished well to get second beaten 1 1/2 lengths. The James Baker trained daughter of Lion Heart by Seattle Slew mare Seattle Way improved her record to 2 wins, 3 seconds, and 1 third in 8 starts, earning $160,774 for owner Tom R. Walters. Albarado said, "She had a great chance to win, as always. She ran great, she had a nice race. I ran her at a fast pace."

Right: Third place finisher Cat Moves returns after the race. Her trainer Anthony Dutrow said, "We got beat today. I thought she was in trouble going around the far turn. At the top of the stretch, Johnny (Velazquez) needed more horse. She was struggling a little bit. Her class got her through the stretch. It was good to see that. There will be another day for her." 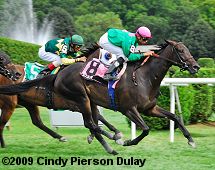 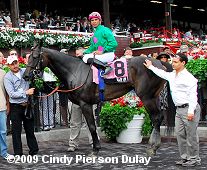 Kicking off the stakes action on Saturday was the $70,000 John Hettinger Stakes for three-year-old fillies going 1 mile on the inner turf course. 4-1 second choice Striking Dancer set the early pace of 23.58, 47.17, and 1:09.59 over the firm course before tiring through the stretch. 5-2 favorite Maram, unraced since winning the Breeders' Cup Juvenile Turf last October, raced in mid-pack fifth early, taking a short lead in mid-stretch and easily holding off 5-1 Bluegrass Princess late to win by 1/2 a length in 1:34.75. It was just a neck back to 7-2 second choice Kiawah Cat third.
Results Chart

Her trainer Chad Brown said, "I learned from the best, Bobby Frankel, getting fillies to run off the layoff on the turf. He taught me everything. I didn't know how fit the other ones were, I didn't know about the win, but I knew I had her ready for a prime effort." 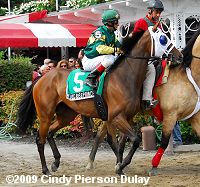 Second place finisher Bluegrass Princess heads out to the track before the race.

On to the Vanderbilt & Honorable Miss Handicaps from Sunday