After a delayed start due to the unreasonable extension of lockdowns by the Ontario government, Woodbine finally opened for live racing on June 11, with the first stakes races run on Saturday the 19th. Conditions were excellent, with cloudy skies and a race time temperature of 30.3 C (86.5 F), and as was the case for the entire 2020 season, racing is being conducted without spectators. The first graded stakes in Canada for 2021 was the $150,000 Whimsical Stakes (G3) for older fillies and mares sprinting 6 furlongs on the Tapeta main track. After 2 scratches, Artie's Princess was sent off as the 6-5 favorite in the field of 6, unraced since winning the Bessarabian Stakes (G2) in November. In to challenge her included 9-5 second choice Boardroom, 2nd in the Bessarabian after winning the Duchess, and 6-1 third choice Golden Ami, 6th in the Sugar Swirl (G3) at Gulfstream in December.

Jockey Daisuke Fukumoto sent Golden Ami to the lead out of the chute and she set blazing fractions of 21.93 and 43.93 while pressed by Artie's Princess and stalked by 16-1 longest shot Summer Sunday. Turning for home, the pacesetters tired as Boardroom, 4th early under Luis Contreras, swept 5 wide to the lead through 5f in 56.04. 8-1 Our Secret Agent put in a strong late rally from last but Boardroom held her off to win by a neck in 1:08.35, just 0.30 seconds off Pink Lloyd's track record. It was another 3/4 length back to 9-1 Amalfi Coast third, while favorite Artie's Princess faded to finish 5th beaten 3 1/4 lengths. 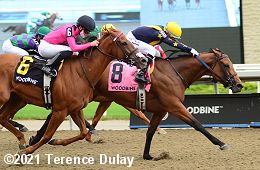 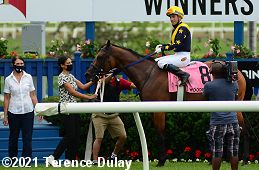 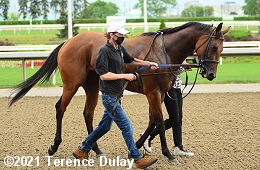 Left: Boardroom in the winner's circle. Winning trainer Josie Carroll said, "I think she's a really special filly and the race set up beautifully for her, Luis sat patiently just off of them and the filly proved what she is. I wasn't [surprised how close she was] with the way this track is playing. This track is very speedy today, so she was a little closer than maybe we had anticipated prior, but the way the day's been unfolding, I wasn't that surprised."

Right: Boardroom heads back to the barn after the race. 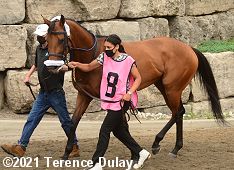 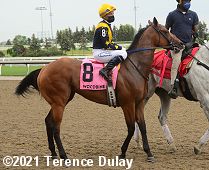 Left: Boardroom walks over before the race. Winning jockey Luis Contreras said, "Reading the program and by the way the track has been playing, that was pretty much the thing to do. Everything worked perfect. Every single step of the race I was right there. She's so amazing." 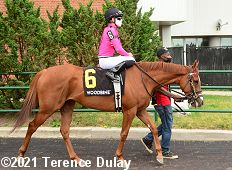 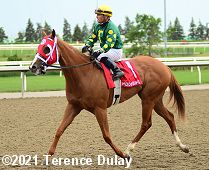 Left: Second place finisher Our Secret Agent heads to the track before the race. The Mark Casse trainee improved her record to 2 wins, 5 seconds, and 3 thirds in 10 starts, earning $161,395 for owner Gary Barber. 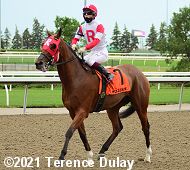 Fifth place finisher and beaten favorite Artie's Princess returns after the race. The Wesley Ward trainee has a record of 5 wins, 1 second, and 0 thirds in 8 starts, earning $260,253 for owner-breeder Ken and Sarah Ramsey. 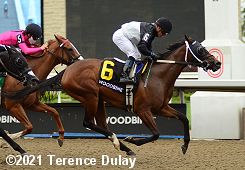 The first stakes race of the meeting was the $125,000 Star Shoot Stakes for three-year-old fillies also sprinting 6 furlongs on Tapeta. Drunk Dial was sent off as the 1-2 favorite in the field of 8, unraced since her debut win in November. In to challenge her included 8-1 second choice Polyanthus, unraced since her debut win over a year ago, and 9-1 third choice La Libertee, 8th in the Soaring Softly (G3) at Belmont Park.

Jockey Luis Contreras sent Drunk Dial to the lead out of the chute through fractions of 21.69 and 44.09 while pressed by Polyanthus and stalked by 10-1 California Lily. Turning for home Drunk Dial tired badly as California Lily inherited the lead through 5f in 56.59. 12-1 Can't Buy Love, 6th early under Justin Stein, came out 3 wide and rallied to win by 3/4 length over 18-1 Dirty Dangle in 1:09.47. It was a nose back to California Lily third, while Drunk Dial tired to finish 7th beaten 7 1/4 lengths. 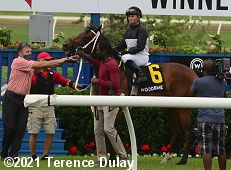 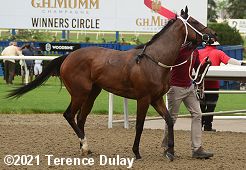 Left: Can't Buy Love in the winner's circle. Winning jockey Justin Stein said, "They were moving along, the field in front of me. The favorite actually broke bad to the outside and I had a chance to kind of make that horse have to do a little extra early and then [Can't Buy Love] just settled into stride and waited for her cue. I could tell she wanted to win, she was surging at those horses and she wanted to be at the wire first today."

Right: Can't Buy Love heads back to the barn after the race. 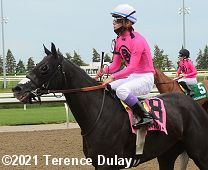 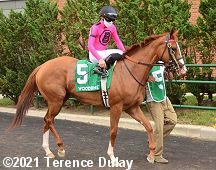 Right: Third place finisher California Lily heads out to the track before the race. The Mark Casse trainee improved her record to 2 wins, 0 seconds, and 1 third in 6 starts, earning $65,789 for owner Gary Barber. 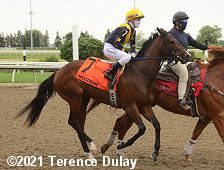 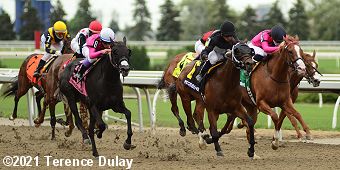 Left: Seventh place finisher and beaten favorite Drunk Dial in the post parade. The Josie Carroll trainee has a record of 1 win, 0 seconds, and 0 thirds in 2 starts, earning $34,075 for owner LNJ Foxwoods.

Right: Down the stretch in the Star Shoot Stakes.