The first graded stakes of the Woodbine racing season is the $150,000 Whimsical Stakes (G3). A field of ten older fillies and mares sprinted 6 furlongs on the Polytrack on Sunday afternoon, under cloudy skies with temperatures in the low 60's. As expected, Atlantic Hurricane, last year's Sovereign Award winner as champion female sprinter, was sent off as the 8-5 favorite, unraced since winning the Ontario Fashion in October and the Bessarabian (G3) in November. In to challenge her included 9-4 second choice Roxy Gap, off a third place finish in an allowance over the Gulfstream turf, and 5-1 third choice Sweet Cassiopeia, winner of her last three starts, all at Woodbine last season, and making her stakes debut here.

Jockey Jesse Campbell sent 8-1 Honey Chile to the lead exiting the chute and she set quick fractions of 22.50 and 45.11 over the fast Polytrack while stalked by favorite Atlantic Hurricane and Roxy Gap. Honey Chile continued to lead to midstretch getting 5/8 in 56.85, but Roxy Gap quickly gained on the paceetter, pushing her neck in front in the final strides to get the victory in 1:09.15. It was another 1 1/2 lengths back to Atlantic Hurricane third. 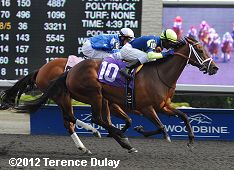 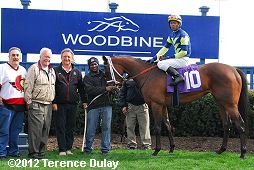 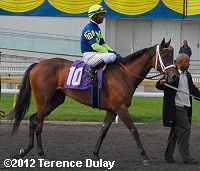 Left: Roxy Gap in the winner's circle. Winning jockey Patrick Husbands said, "This is a changed horse from last year, she's grown up. She's really interested in running right now. Before, she was a little bit green. I breezed her in the morning. I broke so sharp, she wanted the lead, but I drew the outside and I didn't have any pressure. I just bided my time and when I asked her, she gave me a 110 (per cent). From the time we left the gate she wanted the lead. But with so much speed in here I didn't want to go early. This is a nice horse." 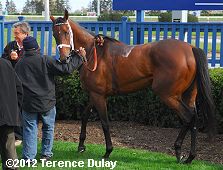 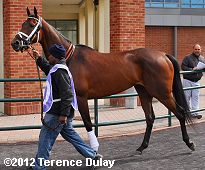 Left: Roxy Gap heads back to the barns after the race. Winning owner-breeder Eugene Melnyk said, "Roxy is a very special horse for us. Watching her throughout the winter just playing in the fields, we knew that if we gave her some time, and some rest, she was going to come back an absolute monster. This is just the beginning of what we hope will be a long campaign for her. The way Patrick rode her and Mark (Casse) trained her back at the farm I can't thank them enough for what they've done so far."

Right: Roxy Gap comes over to the paddock before the race. Asked about the Ottawa Senators hockey team (which he owns), Melnyk added, "We're very proud of them. It's 'The Little Engine That Could.' They just keep trying and trying and trying. I just came back from New York and it was an absolute war zone down there. To come back to Ottawa, it's going to be like an oasis. We're ready for the Rangers." 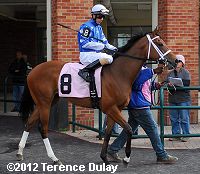 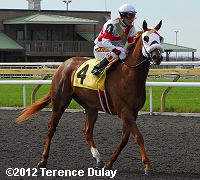 Left: Second place finisher Honey Chile heads out of the paddock before the race. The 8-1 fourth choice set the pace under new jockey Jesse Campbell but was caught in the final strides. The Wayne Catalano trainee improved her record to 3 wins, 4 seconds, and 4 thirds in 15 starts, earning $238,556 for owner James F. Miller.

Right: Third place finisher and beaten favorite Atlantic Hurricane returns after the race. The 8-5 favorite pressed the pace the whole way under new jockey Gerry Olguin but evened out at the 1/8 pole to finish third beaten 1 3/4 lengths. The Simon Stuart trainee improved her record to 8 wins, 2 seconds, and 2 thirds in 16 starts, earning $449,553 for owners Brent and Russell McLellan, Carl Hollick, and Simon Stuart.