The first graded stakes of the Woodbine racing season is the $150,000 Whimsical Stakes (G3). A field of seven older fillies and mares sprinted 6 furlongs on the Polytrack on Sunday afternoon, under sunny skies with temperatures in the mid 50's. As expected, Tribal Belle, last year's Sovereign winner as champion female sprinter, was sent off as the 4-5 favorite, unraced since winning her last 4 starts in 2009 including the Bessarabian in November. In to challenge her included 7-2 second choice Proud Heiress, shipping in from Turfway Park where she won the Wishing Well Stakes in January and then finished second by a nose in the Queen Stakes in March, and 6-1 third choice Dancing Allstar, unraced since finishing fifth in the Royal North Stakes on the turf in August.

Jockey Patrick Husbands sent Dancing Allstar to the lead exiting the chute, opening up a 1 1/2 length lead through fractions of 21.84 and 44.84 over the fast synthetic surface, with 13-1 Silver Z stalking her in second and favorite Tribal Belle another length back in third. Entering the stretch, Dancing Allstar tired badly and faded to eventually finish last. Silver Z opened up a 2 length lead on Tribal Belle at the 1/8 pole through 5 furlongs in 57.17, but the fast pace set the race up for the closers. Tribal Belle gained through the final furlong but Proud Heiress, who was last early, closed with a rush down the center of the track to get the win by a nose in 1:09.71. It was just 1/2 a length back from Tribal Belle to Silver Z third. 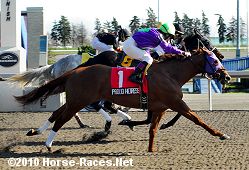 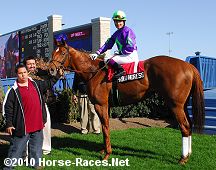 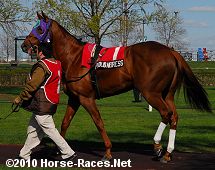 Left: Proud Heiress in the winner's circle. Her trainer Wayne Mogge said, "She's getting better with age. The race set up perfectly."

Right: Proud Heiress in the paddock before the race. 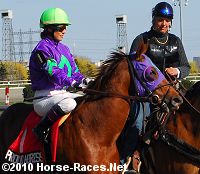 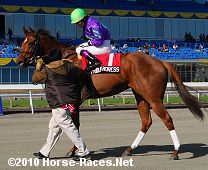 Right: Proud Heiress returns after the race. The 7-2 second choice settled as many as 10 lengths off the pace under new jockey Chantal Sutherland, came out 7 wide for the drive, and closed well to get the win. The 6-year-old improved her record to 5 wins, 5 seconds, and 3 thirds in 17 starts, earning $283,286 for owner Michael Cavey. 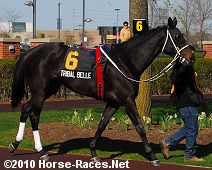 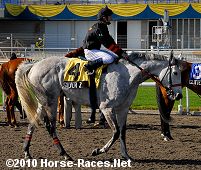 Left: Second place finisher and beaten favorite Tribal Belle in the paddock before the race. The 4-5 favorite raced in midpack 3rd early, 4 lengths off the pace under regular rider Jim McAleney, came out 4 wide to gain a short lead at the 1/16 pole but was unable to hold off the winner. The Danny O'Callaghan trainee improved her record to 10 wins, 2 seconds, and 1 third in 16 starts, earning $538,580 for owner-breeder Canvasback Farms.

Right: Third place finisher Silver Z returns after the race. The 13-1 shot sat 1 1/2 lengths off the pace in second down the backstretch under jockey Omar Moreno, opened a clear lead at the 3/16 pole but failed to hold off the first two in the final furlong, finishing third beaten just 1/2 a length. The Nathan Wallis trainee improved her record to 4 wins, 3 seconds, and 2 thirds in 16 starts, earning $255,020 for owner Nick A. Smith.