The feature race on Saturday at Santa Anita was the $200,000 Las Virgenes Stakes (G2) for 3-year-old fillies going 1 mile on the main track. It is also a points-scoring race with the winner earning 10 points in the Road to the Kentucky Oaks. Conditions were excellent in Southern California with sunny skies and temperatures in the low 80's. A short field of just 5 made final entry, with Kalypso sent off as the even-money favorite off her win in the Santa Ynez Stakes (G2) after finishing second in the Starlet (G1). In to challenge her included 6-5 second choice Moonlight d'Orom, a maiden winner at Los Alamitos last out, and 4-1 third choice Moraz, off her maiden win by 11 lengths last out. 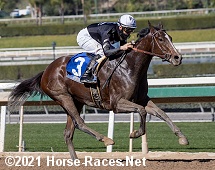 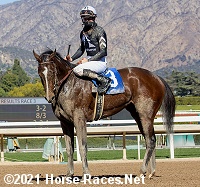 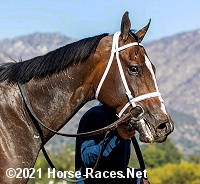 Left: Moonlight d'Oro in the winner's circle. Winning co-owner Joe Moran said, "She’s a filly that we’ve always been high on since the beginning. She’s had some rough trips her first two go arounds at Del Mar. Once she got the two turn distance, she just picked up the pieces."

Right: Moonlight d'Oro heads back to the barn. Co-owner Scott Jagow added, "It’s been an incredible year and to have a great horse back in the stable like Moonlight d’Oro, she’s doing so well…we were following her last year we knew we had a great talent there. We’re so excited for the future with her. It’s such a great sport, of course we all love the horses, but the people you meet in the industry is just so much fun." 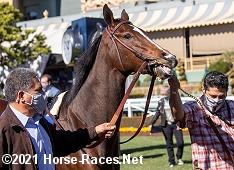 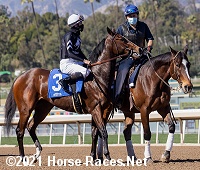 Left: Moonlight d'Oro in the paddock before the race. Winning trainer Richard Mandella said, "It turned out good. I was worried she got a little washy going to the gate, and she was a lamb over at Los Alamitos where she should have gotten upset. Sometimes you take them over to something like that and then the next time they’re looking for the excitement. How can you do any better than they have done? Kentucky Derby and Breeders’ Cup."

Right: Moonlight d'Oro in the post parade. Winning jockey Flavien Prat said, "I was trying to see if I should stay inside or go around, and I decided to go around. She was there for me when I asked her to go. Rosario was at the front and nobody was really bothering him, but when I came around the turn, I made that great move and tried to get some momentum out of it. She was traveling nicely behind horses, and I was very happy with how she ran." 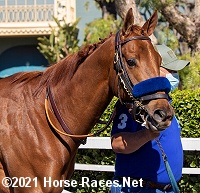 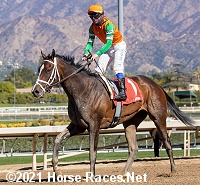 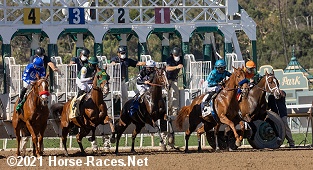 The fillies break from the gate for the Las Virgenes Stakes. 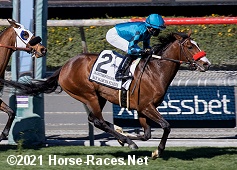 Immediately after the Las Virgenes, a field of 6 older horses went to post for the $200,000 San Marcos Stakes (G2), a 1 1/4 mile turf contest out of the downhill chute. Acclimate was sent off as the 6-5 favorite off his 3rd place finish in the Unusual Heat Turf Classic. In to challenge him included 8-5 second choice Masteroffoxhounds, an alowance winner in his 2nd start in North America after shipping from Ireland, and 11-2 third choice Oscar Dominguez, unraced since 6th in the Hollywood Turf Cup (G2).

Jockey Tyler Baze sent Acclimate to a clear lead down the hill and first time around through easy fractions of 24.41, 49.37, 1:14.19, and 1:38.49 while prressed by Masteroffoxhounds and stalked by 13-2 fourth choice Salvator Mundi. Into the lane for the final time Acclimate continued to lead but Masteroffoxhounds, confidently ridden by Joel Rosario, rallied by inside the 1/8 pole to win by 1 1/4 length in 2:01.39. It was another 1 1/2 lengths back to 19-1 longest shot Starting Over third. 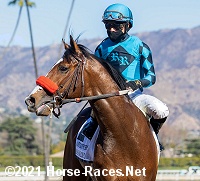 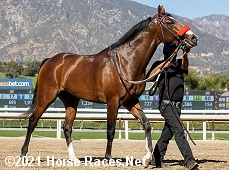 Left: Master of Hounds in the winner's circle. Winning trainer Richard Baltas said, "I was worried it was going to be a slow pace, and it was a slow pace at 14 and change. He was impressive last time and was trained up well going into this race. It was a big jump from one event to a stake, but he’s got a lot of credibility. I told Joel to sit second, and he did it perfectly. He let the horse in front relax, but the other horse is getting old. Oscar is getting old, and the other horse is getting old, they’re seven or eight years old."

Right: Master of Hounds heads back to the barn after the race. 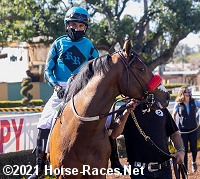 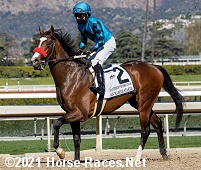 Left: Master of Hounds in the paddock before the race. Winning jockey Joel Rosario said, "He was moving pretty well for me. The whole time I was tracking the horse in front with a nice stride. I had a lot of confidence in my horse. I was keeping him focused a bit in the last part, but (he) was much the best in the end."

Right: Master of Hounds returns after the race. Baltas added, "I changed the bridle and I changed the exercise rider. I just wanted him to be more aggressive. He tended to pick up the bit more in the mornings. He’s trained forwardly and we’re very fortunate to have him." 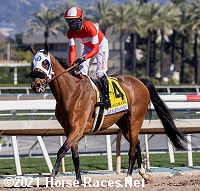 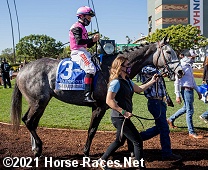 Right: Third place finisher Starting Over in the paddock before the race. The Robert Falcone Jr. trainee improved his record to 1 win, 1 second, and 3 thirds in 7 starts, earning $88,560 for owner Nice Guys Stable. 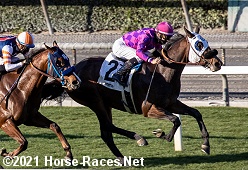 On Friday the feature was the $75,000 Baffle Stakes with a field of nine 3-year-olds going 6 1/2 furlongs on the turf out of the new backstretch chute. Maiden winner Earls Rock was sent off as the 9-10 favorite over 7-2 second choice Commander Khai. 2nd in the Eddie Logan last out, and 6-1 third choice Beer Can Man, winner of the Cecil B. DeMille (G3).

26-1 Mac Daddy Too and 44-1 Exhalting dueled for the lead down the backstretch and around the turn through fractions of 23.06 and 45.77 while stalked by Beer Can Man and Commander Khai. Turning for home, Earl's Rock, 5th early under Flavien Prat, came through between horses to gain the lead at the 1/8 pole and pulled away to a 3/4 length win over Beer Can Man in 1:16.15. It was another 3 1/4 lengths back to Mac Daddy Too third. 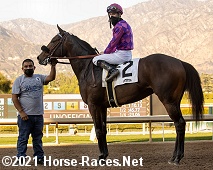 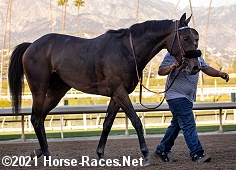 Left: Earls Rock in the winner's circle. Winning trainer Phil D'Amato said, "This is about as short as he wants. The jock rode a tremendous race. He was very patient and the way he split horses, it made all the difference."

Right: Earls Rock heads back to the barn after the race. Winning jockey Flavien Prat said, "The distance was a bit of question mark, it was a little short for him. But he relaxed well behind horses and when I asked him to go, he really cut." 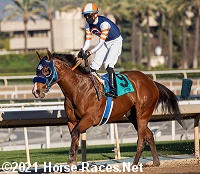 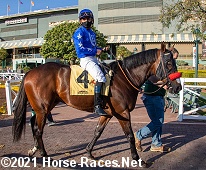 Left: Second place finisher Beer Can Man in the paddock before the race. The Mark Glatt trainee improved his record to 3 wins, 1 second, and 1 third in 7 starts, earning $126,356 for owners Little Red Feather Racing and Sterling Stables.