The 2021 Thoroughbred meeting at Woodbine came to an end on Sunday with a marathon 14-race card that drew a record closing day handle of $8.53 million. Conditions were typical for early December at the Toronto oval, with light snow flurries and a race time temperature of 1.3 C (34.3 F) accompanied by 30 km/h (19 MPH) wind gusts. The traditional closing day stakes is the $150,000 Valedictory Stakes (G3), a 1 1/2 mile trip for older horses going around 3 turns of the Tapeta main track. The race had been run at 1 3/4 miles in previous years. A full field of 14 made final entry with 2019 Belmont Stakes (G1) winner Sir Winston sent off as the 8-5 favorite off second place finishes in the Durham Cup (G3) and Autumn Stakes (G2). In to challenge him included 9-2 second choice Frosted Over, winner of the Ontario Derby (G3), and 11-2 third choice Special Forces, winner of the Durham Cup before finishing third in the Autumn Stakes.

Jockey Steven Bahen sent 27-1 Collective Force to the lead around the first of three turns through fractions of 24.78 and 50.36 while pressed by 14-1 Jelgo and stalked by Frosted Over and 9-1 fourth choice War Bomber. After crossing the finish post first time by, Jelgo took a bad step and was pulled up on the clubhouse turn by jockey Sahin Civaci. Down the backstretch, War Bomber gained the lead through 3/4 in 1:16.23 and 1 mile in 1:43.78 before tiring. On the far turn, Frosted Over poked his head in front but Sir Winston, fifth early under Patrick Husbands, took over the lead through 10f in 2:08.32. Through the lane Sir Winston inched away to win by 1/2 a length over his stablemate Frosted Over in 2:31.51. It was a long 6 3/4 lengths back to Collective Force third. Unfortunately Jelgo sustained a leg injury and was euthanized after being vanned off the track. 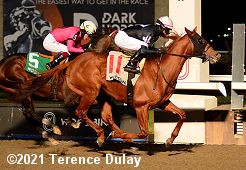 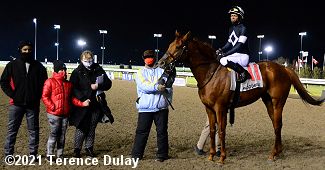 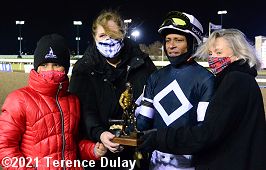 Left: Sir Winston in the winner's circle. Winning jockey Patrick Husbands said, "From looking at the Racing Form, there wasn't really much speed in the race. I was drawn so wide. I wanted to cut the first corner. I never rode him (before). I made sure to get him out of there and then play it by year. He relaxed right off the bat. Four furlongs out, I said 'lets go.'"

Right: The trophy presentation for the Valedictory in the wind and cold. Husbands said that he is considering retirement. Currently his career totals are 3,507 wins, 3,028 seconds, and 2,639 thirds in 18,752 starts, with purse earnings of $170,790,666. He won the Sovereign Award as Canada's outstanding jockey 8 times: 1999-2002, 2007-2009, and 2014, and was the regular rider of the last Canadian Triple Crown winner Wando in 2003. The native of Barbados was given the Avelino Gomez Memorial Award in 2014 and is all but guaranteed to be inducted into the Canadian Horse Racing Hall of Fame. 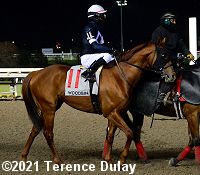 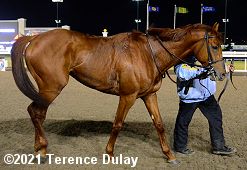 Left: Sir Winston in the post parade. Husbands said of possibly retiring, "I want to say thanks to Mark (Casse, trainer), time out. I had a hard week. I texted Mark around 11:30 on Wednesday night and Mark returned my call Thursday morning and I would not answer the phone. I said, 'Mark, I'm done.' And he said, 'You can't do this, Patrick. You can't go out like this. You have to let Woodbine know that you are finished.' In my heart, I want to be here. I wanted to make today, right now, my last ride at Woodbine. Woodbine was great to me. But Mark told me I had the whole winter to think about it. I tip my hat off to Mark. He was there for me from day one. Everyone was there for me through my injuries. So, I will think about it through the winter."

Right: Sir Winston heads back to the barn. Trainer Mark Casse won the trainer title with 110 wins, 27 in stakes. Earlier in the week he said, "Our season is geared towards Woodbine. Obviously, we run at different places, but over the years, weÆve built up a strong Canadian group, not just in horses, but owners. They want to see their horses and get out there and enjoy the racing, so hopefully, in 2022, we can all have the type of year everyone is used to. Wherever I go, Woodbine and my name seem to go hand-in-hand. And that is something I am very proud of. We have wonderful people that have been with us for a long time. They are very dedicated and passionate in what they do, day in and day out. A lot of people might not know, but our entire staff are all Canadians." 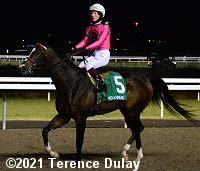 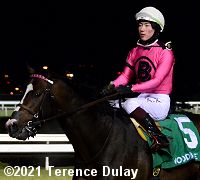 Left: Second place finisher Frosted Over returns after the race. The Mark Casse trainee improved his record to 3 wins, 1 second, and 0 thirds in 7 starts, earning $169,610 for owner Gary Barber.

Jockey Kazushi Kimura earned his first Woodbine riding title, booting home 138 winners in 717 starts. Second in wins at Woodbine is Rafael Hernandez with 84 wins, followed by Emma-Jayne Wilson with 83. Kimura also led all Woodbine riders in purse earnings with $5.070 million, ahead of Justin Stein's $4.493 million and Hernandez's $4.029 million. Kimura said, ōItÆs a special achievement, and it was one of my dreams. Everybody wants to be a leading rider, but itÆs not easy. We just need great riding skills and good horses, good support from the trainers and owners for the whole season to be able to get the title. This year, IÆd say I improved, and I got good support from trainers and owners. I appreciate that help for me to get the riding title.ö 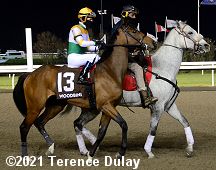 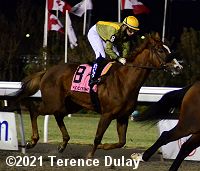 Right: Jelgo races in fourth place first time by. Shortly after this he took a bad step and was pulled up on the clubhouse turn by jockey Sahin Civaci. Unfortunately Jelgo sustained a leg injury and was euthanized after being vanned off the track.