The feature race at Belmont Park on Saturday was the $200,000 Vagrancy Handicap (G2) for older fillies and mares sprinting 6 1/2 furlongs on the main track. A field of 6 went to post before the 7,827 fans in attendance under overcast skies and temperatures in the low 60's. Glorious View was sent off as the 8-5 favorite, making her stakes debut off three consecutive allowance wins at Aqueduct. In to challenge her included 3-1 second choice Miss d'Oro, third in the Distaff Handicap (G2) at Aqueduct last out, and 7-2 third choice Fantasy of Flight, 8th in the Madison Stakes (G1) at Keeneland after finishing second in the Hurricane Bertie (G3) at Gulfstream.

Jockey Junior Alvarado set Glorious View to the lead immediately and she set quick fractions of 22.14 and 45.04 over the fast track while stalked by 9-2 fourth choice Spectacular Sky. Entering the stretch, Fantasy of Flight moved up to challenge, getting alongside the favorite at the 1/8 pole through 3/4 in 1:09.51, but Glorious View turned her away in the final yards to win by 1/2 a length in a time of 1:15.96. It was another 2 length back to 8-1 Withgreatpleasure third.

Past winners of the Vagrancy Handicap 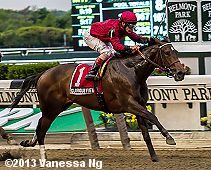 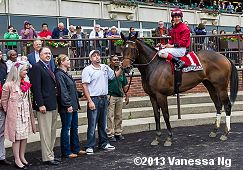 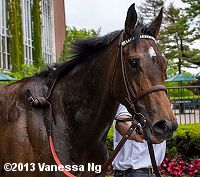 Right: Glorious View heads to the barn after the race. Winning trainer Bill Mott said, "She showed a lot of gameness today. She had won her last few races fairly easily, and that's a pretty nice filly who ran up to her in the stretch. Sometimes when they don't break well (from the rail), you get in a little bit of a jam. Junior put her right up in the race, and if she broke well, that's where we wanted her to be." 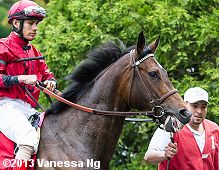 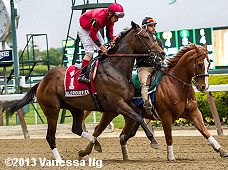 Left: Glorious View leaves the paddock before the race.

Right: Glorious View in the post parade. Winning jockey Junior Alvarado said, "I knew there was going to be a lot of speed in the race. My filly has speed but she can stalk, too. Billy left it up to me. She broke really sharp and pretty much took me around the whole way. When I asked her to run, she kept digging in. She tries so hard, it makes things a lot easier for me. She settled for me during the first part of the race. I was never worried because she was never bothered by the horse outside her down the backstretch. She was very relaxed. And at the end, I just put her closer to (Fantasy of Flight), and she kept fighting. She would never let that other horse go by." 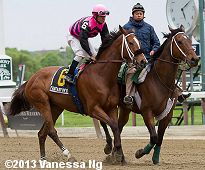 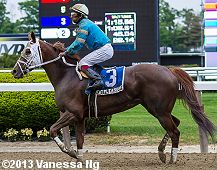 Left: Second place finisher Fantasy of Flight in the post parade. The 7-2 third choice raced in midpack fourth early 2 1/2 lengths off the pace under new jockey Cornelio Velasquez, challenged for the lead in the lane but was turned away in the final strides. The Michelle Nevin trainee improved her record to 3 wins, 6 seconds, and 1 third in 13 starts, earning $249,056 for owner Sanford H. Robbins LLC.

Right: Third place finisher Withgreatpleasure returns after the race. The 8-1 fifth choice was last 6 lengths off the pace early under new jockey Rajiv Maragh, then rallied late to get third beaten 2 1/2 lengths. The David Nunn trainee improved her record to 7 wins, 11 seconds, and 4 thirds in 32 starts, earning $612,850 for owner-breeder David and Valerie Blethen.