The feature race on Sunday at Santa Anita was the $200,000 Twilight Derby (G2) for three-year-olds going 1 1/8 miles on the turf. Conditions were typical for mid October with sunny skies and temperatures in the high 80's and the course rated firm. A field of 9 made final entry with La Jolla Handicap (G3) winner Smooth Like Strait sent off as the 6-5 favorite off his 4th place finish in the American Turf (G2). In to challenge him uncluded 7-2 second choice Field Pass, 3rd in the American Turf after finishing 7th in the Saratoga Derby Invitational, and 7-1 third choice Scarto, an allowance winner at Del Mar last out. 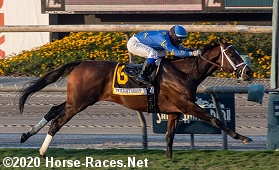 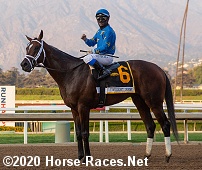 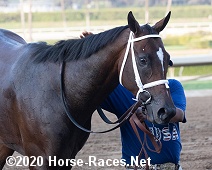 Left: Smooth Like Strait in the winner's circle. Winning trainer Mike McCarthy said, "I was a little disappointed in the way he ran at Churchill Downs (Sept. 5th 4th place). I didn't think there was a horse around that could beat him that day. Things just didn't unfold the way we would have liked. We got a little softer turf course than I would have liked, and we got a little bit of a speed duel. This horse has come back, and he has not disappointed since we've been back."

Right: Smooth Like Strait heads back to the barn after the race. Winning jockey Umberto Rispoli said, "I studied the race yesterday and this morning because I really wanted to win. The horse is actually really improving himself. We know how he could be keen in the first part of the race, but Michael (McCarthy) does such an amazing job, he's been relaxed. You can see him behind horses now and he really understands to be there to be calm. Even when the horses reached me at the three eighths pole I thought about what to do, ‘Am I going to go, or stay?' I just put the gears in and then we went. At the top of the straight I knew I had the race in my hand." 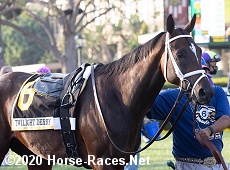 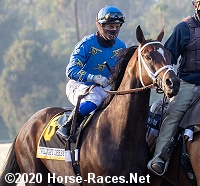 Left: Smooth Like Strait in the paddock. McCarthy added, "I was a little skeptical about a mile and an eighth, but he won going a mile and sixteenth in the La Jolla Handicap (Aug. 9) very well. All the stars aligned today. He brought his A-game. Umberto rode him like the leading rider he is. I'm very happy for the Cannon's and everybody involved, even my groom Mike Munoz and Cleo Thomas, they do an excellent job with this horse, so a lot of credit goes to those guys."

Right: Smooth Like Strait in the post parade. Rispoli added, "I like the horse, I had so much confidence in myself, which I've never been, I was a little bit nervous to be honest. When I worked him the other morning I said, if the other horse (Scarto 2nd) goes to the Breeders' Cup this horse has to win this race. So, he gave me a good answer and I think Michael has a good shot in the Breeders' Cup too." 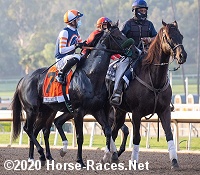 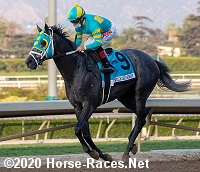 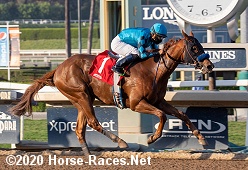 Immediately before the Twilight Derby, a field of 5 two-year-old fillies contested the $75,000 Anoakia Stakes over 6 furlongs on the main track. Debut winner Queengol was sent off as the 6-5 favorite over 2-1 Forest Caraway, 2nd in the Del Mar Debutante (G1), and 9-2 Kalypso, still winless in 2 starts but 2nd last out at Del Mar. Jockey Abel Castillo sent Kalypso to the lead exiting the chute through fractions of 22.17 and 45.14 while pressed by 6-1 Illumination and stalked by Queengol. Turning for home Kalypso opened up a 2 length lead through 5f in 57.35 and pulled away late to win by 2 1/4 lengths over Queengol in 1:10.30. It was another 1/2 length back to Illumination third. 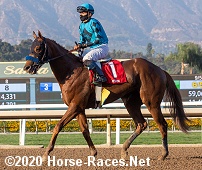 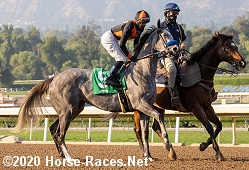 Left: Kalypso in the winner's circle. Winning trainer Bob Baffert said, "This is the best Brody's Cause I've ever trained (this is the only horse he's trained by this stallion). We've been wanting to run her long, but we couldn't get a race to go. She got sick after Del Mar, so we took our time with her. She's been training well and she's changed a lot. We'll stretch her out next time." Winning jockey Abel Castillo added, "I knew she had speed, so she broke really sharp and I just took that. She finished really strong and she galloped out really strong too. I think she did it pretty well."

Right: Second place finisher and beaten favorite Queengol in the post parade. The John Sadler trainee improved her record to 1 win and 1 second in 2 starts, earning $48,500 for owners Saragol Stable and Johana Viana.