The co-feature race on Friday at Saratoga was the $200,000 Troy Stakes (G3) presented by Horse Racing Ireland for older horses sprinting 5 1/2 furlongs on the Mellon turf course. Conditions were excellent at the historic upstate oval with sunny skies and temperatures in the mid 80's. Shakertown (G2) winner Bound for Nowhere was sent off as the 9-4 favorite in the field of 9 off his 3rd place finish in the Jaipur (G1). In to challenge him included 11-4 second choice Imprimis, second in the Shakertown, and 4-1 third choice Lazuli, winner of the Betfair Palace House Stakes (G3) before finishing 6th in the Coral Charge Sprint (G3).

Jockey Javier Castellano sent 24-1 longest shot Carotari to the lead down the backstretch and around the turn through fractions of 21.74 and 44.15 while pressed by Lazuli and stalked by Imprimis. Turning for home Carotari opened up a 2 length lead throuh 5f in 55.48 but 11-1 Fast Boat, 6th early under Tyler Gaffalione, came out 5 wide for room and rallied to win by 1/2 a length in 1:01.24 over the firm going. It was another length back to 7-1 Gear Jockey third, while favorite Bound for Nowhere raced 5th throughout but failed to close, finishing 5th beaten 4 lengths. 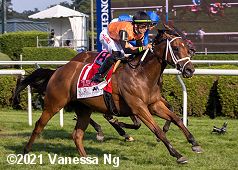 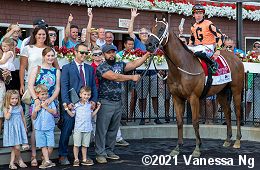 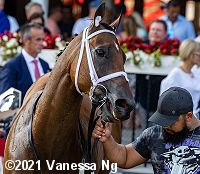 Left: Fast Boat in the winner's circle. Winning trainer Joe Sharp said, "He was training very forwardly into the race. He's a horse we've gotten to know really well and we know all his 'isms.' When he's doing well and when he's going to run a big race and everything pointed to his effort today. The weather cooperated today. He prefers a firm turf course, and for the Jaipur so he lost his opportunity at the Grade 1 with the give in the ground. But I'm not taking anything away from today. We're super proud to be here and honored."

Right: Fast Boat heads back to the barn after the race. Winning jockey Tyler Gaffalione said, "I didn't expect to be that close, but he was travelling pretty easy and I just let him do his thing. I didn't want to get in his way and when I tipped him out he really finished his job. Mr. Sharp has done a great job with him. You can tell when he's in that five-and-a-half to three-quarters range, he really runs his race." 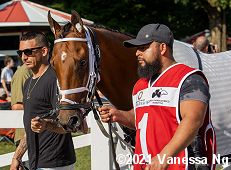 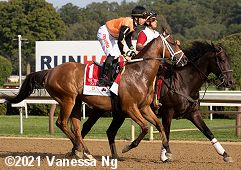 Left: Fast Boat in the paddock. Sharp added, "During the stretch run I was jumping off the ground. I got a little taller inside the eighth pole. You could tell by his momentum that he was going to get there, but the horse on the lead, Javier's [Castellano] horse [Chewing Gum], dug in when he got to him. When he fires his big ones it's always fun to watch from the quarter-pole home. We figured he'd like this turf course here, and he sure did. 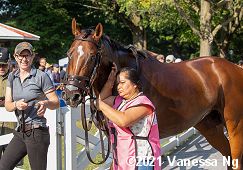 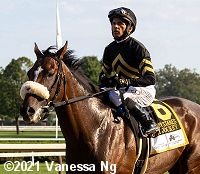 Left: Second place finisher Carotari in the paddock before the race. Jockey Javier Castellano said, "He had been training so well going into this race. You could see on paper how good he was working. I really like how he did it today. I was really satisfied with his race." 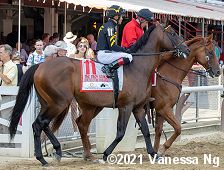 Fifth place finisher and beaten favorite Bound for Nowhere heads out to the track before the race. He has a record of 7 wins, 2 seconds, and 3 thirds in 17 starts, earning $1,055,857 for owner-trainer Wesley Ward.


The $200,000 National Museum of Racing Hall of Fame Stakes (G2) featured a field of 7 older horses going 1 mile around 2 turns of the inner turf course. Public Sector was sent off as the 9-10 favorite off his close second in the Manila Stakes. In to challenge him included 7-2 second choice Wolfie's Dynaghost, an allowance winner after finishing last in the Peter Pan (G3), and 5-1 third choice Next, winner of the War Chant Stakes.

Jockey John Velazquez sent Next to the lead first time by and he set fractions of 23.91, 47.56, and 1:11.37 while pressed by Wolfie's Dynaghost and stalked by 7-1 fourth choice Easy Time and Public Sector. Turning for home, Next continued to lead but Public Sector came through on the rail to win by a length over late-running 16-1 Annex. It was another 1 1/4 lengths back to 30-1 longest shot In Effect third. 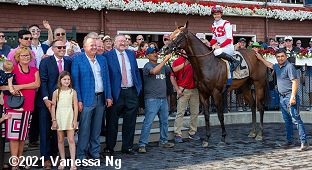 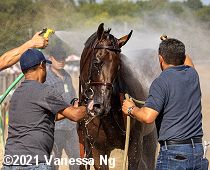 Left: Public Sector heads to the winner's circle. Winning trainer Chad Brown said, "Our plan was to leave out of there with intention. It looked like there was a lot of speed on paper but make them go, get our spot and if they're going to go, go. If not, we'll be there. As it turned out, they actually weren't going. The 47 and 3 is solid but it's been dry here and in a graded race at Saratoga, that's not that fast for these horses. Flavien does many things wonderfully and that was one of them. He gives you a chance to win by adapting to the pace right away. If you give him the right horse, he's going to deliver for you."

Right: Public Sector gets hosed off after the race. Winning jockey Flavien Prat said, "The first time I rode him, I was really close to the pace and he won a nice race [on June 4 at Belmont Park]. Last time, I think it was just a slow pace. I got stuck behind horses. He couldn't really bring me anywhere around the turn and I had to make up a lot of ground on the slow pace (last start). Today, we had a good draw and he broke well and put me in the race. The pace was a bit stronger and it worked out well." 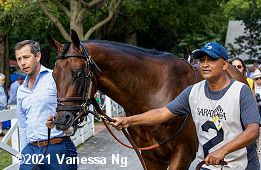 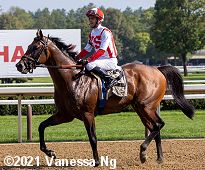 Left: Public Sector in the paddock. Brown said about owner Seth Klarman, "We've become very close friends and he's such a loyal supporter of our stable and he provides us with these wonderful horses like you saw today with Public Sector. He's a real sportsman and always does the right thing by the horse and he gets rewarded because of that."

Right: Public Sector returns after the race. Prat added, "I thought I was going to be able to go around the leader, but then I saw the leader came out and I dropped in and had room. We were pretty much making the move together but when I really asked him to make the move, he responded well." 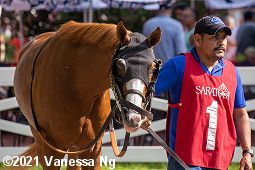 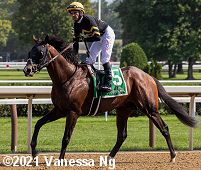 Left: Second place finisher Annex in the paddock before the race. Jockey Junior Alvarado said, "I was moving with Luis Saez [aboard Original] and we both made the run. At the time, I was moving more forward than him and I felt him bump me on my rear end. I knew I was still straight in my path. After that, when he was out of there, I started coming again. My horse put in a good run today and I was happy with him. It may have cost me a few lengths but I didn't have much room on the inside. The winner had the trip and I really didn't have another way to go but just move outside."

Right: Third place finisher In Effect returns after the race. The Jack Sisterson trainee improved his record to 1 win, 0 seconds, and 1 third in 6 starts, earning $62,068 for owner-breeder Calumet Farm.


The $120,000 Alydar Stakes featured a field of 8 older horses going 1 1/8 miles on the main track. Kelly's Landing Stakes 6th place finisher Art Collector was sent off as the 9-5 favorite over 11-4 second choice Night Ops, 2nd in the Monmouth Cup (G3), and 7-2 third choice Jesus' Team, 6th in the Dubai World Cup (G1) then 5th in an overnight handicap at Gulfstream. 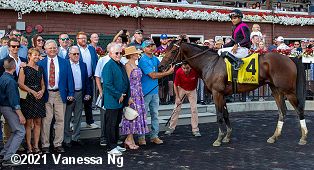 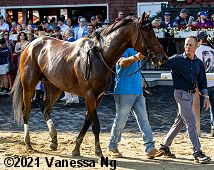 Left: Art Collector heads to the winner's circle. Winning trainer Bill Mott said, "All I had to do was look at his form and see what he had done before. If you look at his nine-furlong races, you saw he had done very well for the previous trainer. But Tom Drury and I had trained for Bruce [Lunsford, the owner] and Bruce wanted the horse in Saratoga, so Tommy sent the horse up to us and he was in good shape when he came. We've had him six weeks and he's done well since he's been here. I would think there'd have to be [consideration for the Woodward]."

Right: Art Collector heads back to the barn after the race. Winning jockey Luis Saez said, "I rode the horse when he was a baby and he liked to be a free runner. The plan was to break well from our post and see if we can get the lead, and everything went the way we planned it. Breaking from there, we got ahead and he kept going. I saw Manny [Franco, aboard Night Ops] coming, but I knew I had a lot of horse, so I was patient with him." 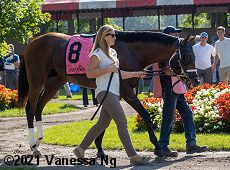 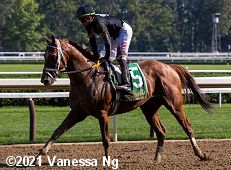 Left: Second place finisher Night Ops in the paddock before the race. Jockey Manny Franco said, "When I was in my position stuck in second, I didn't think the pace was too quick, so I had to do my work because no one else went with [Art Collector]. My horse is a horse that never gives up. He always tries. I have to give credit to the winner, but my horse was second-best today." 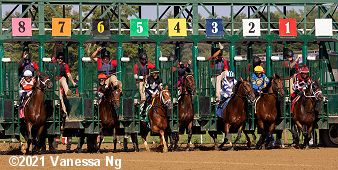 The horses break from the gate for the Alydar Stakes. Jesus' Team (#7) turned his head to the left side just as the latch was sprung and leapt up at the start, losing six to seven lengths right away.