The highlight of the Saratoga meeting is the $1.25 million Runhappy Travers Stakes (G1) featuring the best 3-year-olds on the east coast going 1 1/4 miles on the main track, with 49,672 fans packing the historic upstate oval. A field of 8 went to post under sunny skies and temperatures in the mid 70's for the 153rd "Midsummer Derby", with Kentucky Derby (G1) and Preakness Stakes (G1) runner-up Epicenter sent off as the even-money favorite off his win in the Jim Dandy Stakes (G2). In to challenge him included 9-2 second choice Cyberknife, winner of the Matt Winn (G3) and the Haskell Stakes (G1), and 6-1 third choice Zandon, second in the Jim Dandy after finishing third in the Kentucky Derby.

Jockey Florent Geroux sent Cyberknife to the lead first time by and he set fractions of 23.32, 47.63, and 1:11.43 while pressed by 27-1 Ain't Life Grand and stalked by 7-1 Early Voting. Turning for home Epicenter, 4th early under Joel Rosario, came out for room and swept to the front through 1 mile in 1:35.78. Kept to task by Rosario, Epicenter drew off through the stretch to win by 5 1/4 lengths over Cyberknife in 2:00.72. It was a nose back to late-running 6-1 Zandon fourth, and another neck to 11-1 Rich Strike fourth. 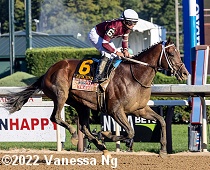 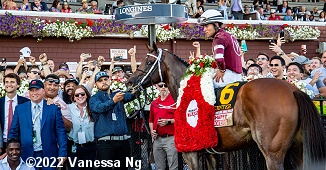 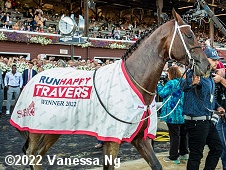 Left: Epicenter in the winner's circle. Winning owner Ron Winchell said, "As long as I can remember, the history of Saratoga and the horses my family has run over the years, the Travers is always the marquee race. Coming here with Gun Runner and running third and Midnight Bourbon running second last year, it just makes you want to win it that much more. It makes this win in this race that much more special for myself and my family. One of the reasons Steve mentioned we came here is knowing we ran second in the Derby and the Preakness. This was a very natural step of where we had to go. We had to beat some of the best in the class to obtain the championship and obtain one of our goals."

Right: Epicenter heads to the barn after the race. Winning trainer Steve Asmussen said, " "It was really gratifying. We walked over today with a tremendous amount of confidence in the horse, but definitely remember we felt exactly that way walking over for this year's Derby. He was away cleanly and thought he was very comfortable and attending close enough to the pace, and just ran a very dominating performance against a very good group. Beforehand, there was a lot of concern about who was going to be on the lead. Early Voting appeared to have the most pace, but they definitely did not want to be on the lead this time. Off of that there was a concern how much pace there would be, but Joel handled Epicenter. He was away clean and in the rhythm he wants to be in and I thought he finished up the mile and a quarter very strong." 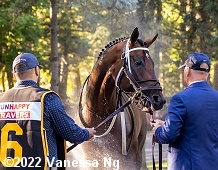 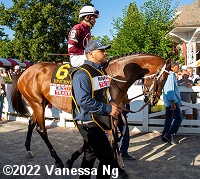 Left: Epicenter in the paddock. Winning jockey Joel Rosario, celebrating his record 12th graded stakes win in a single Saratoga meeting said,  "He broke very well. It was a good trip. I was just following those two horses on the lead. I was inside there and I just wanted to take my time with where he was. He looked like he was a little more in the game today. He did great. He looked like he was going one speed and then he kept building and building and building and I felt pretty good turning for home. I could see he was relaxing and looking around and I felt like I had plenty more, so it felt good. We wanted to be forwardly placed, and he was. He broke good and he was more in the race today. For a second I thought I could just keep going forward to the lead but I looked like those couple horses wanted to be more forwardly placed, so I just wanted to give him a good trip."

Right: Epicenter heads out for the post parade. Asmussen added, "I want to help paint the canoe. Saratoga is about tradition. Racing is about tradition. To have your name on that cup is very special. I thought that answered a lot of questions (about being champion 3-year-old). His resume looks very good and we're willing to run against them again. When you think of the horses that are running and how excellent they are, what a great Breeders' Cup Classic it will be if we can get them all lined up." 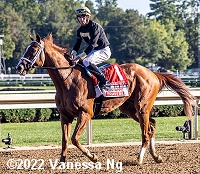 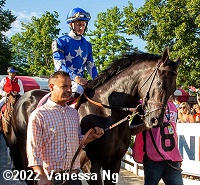 Left: Second place finisher Cyberknife returns after the race. Trainer Brad Cox said, " At 1 1/4, I thought the horse really battled and battled for second, held and I'm very, very proud of our horse. I thought he trained well leading up and he ran a big race. When I saw three-quarters in eleven I thought wow, we're in a good spot here. Obviously, once I saw Joel ranging up, as easy as he was, I thought this was going to be [difficult], once they straightened up, I thought 'we got a shot here', but you could tell he was getting away from us a little bit."

Right: Third place finisher Zandon heads out to the track before the race. Jockey Flavien Prat said, "He made a good run there at the end and I thought he was going to be second, and he just couldn't get by the other horse. I thought he ran good."

The horses break from the gate at the start of the Travers. Jockey Sonny Leon aboard fourth place finisher Rich Strike (post 7) said, "He was doing really well. He just got a little tired in the last 50 yards. He did a good job coming back after the layoff. He's doing better every single time. I think, mentally, he's growing up. It was a different track today. I knew they weren't going to go as fast as they were in the Kentucky Derby, 21 and 45, that wasn't going to happen. But I'm very proud of how Rich Strike ran today."