The highlight of the Saratoga meeting is the $1 million Runhappy Travers Stakes (G1) featuring the best 3-year-olds on the east coast going 1 1/4 miles on the main track, worth 100 points to the winner in the Kentucky Derby Championship Series. New York racing continues to be conducted without spectators. Conditions were excellent with partly cloudy skies and temperatures in the mid 80's, main track rated fast and both turf courses firm. After 1 scratch a field of 7 went to post with Tiz the Law sent off as the 1-2 favorite off wins in the Holy Bull (G3), Florida Derby (G1), and Belmont Stakes (G1). In to challenge him included 5-2 second choice Uncle Chuck, winner of the Los Alamitos Derby (G3), and 11-1 third choice Caracaro, 2nd in the Peter Pan (G3).

Jockey Luis Saez sent Uncle Chuck to the lead first time by and he set fractions of 23.65, 48.36, and 1:11.95 while pressed by 77-1 longest shot Shivaree and stalked by Tiz the Law. Turning for home Uncle Chuck tired allowing Tiz the Law to inherit the lead through 1 mile in 1:36.42. Kept to task by Manny Franco, Tiz the Law drew off through the lane to win going away by 5 1/2 lengths over late-running Caracaro in 2:00.95. It was another 2 lengths back to 23-2 third choice Max Player third. 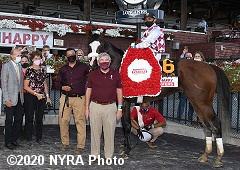 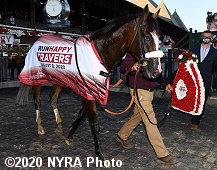 Left: Tiz the Law in the winner's circle. Winning owner Jack Knowlton said, We saw a performance today that just blows me away. We know we had a nice horse. We thought we had the best horse. To do what he did today, we're looking forward to going to Kentucky (Derby) now. It's fabulous. We're getting redemption 17 years later (after Funny Cide lost the Belmont and did not run in the Travers). Tiz won the Belmont, now he won the Travers. It's quite an accomplishment for our little stable of New York-bred, for Barclay Tagg training our New York bred to win the biggest races in New York. We're just thrilled to death. We're the third New York bred to win this race, the first New York bred in 138 years to win the Belmont Stakes."

Right: Tiz the Law heads back to the barn after the race. Winning trainer Barclay Tagg said, "It's the way I thought he would be all along. I thought he'd have to come to Uncle Chuck into the stretch and he would go by him if he quit. It went so easy for him, which is fine with me, too. The easier, the better. I've been doing this a long time and I've always wanted to win the Travers. This has been in my head my whole life. And now it happened so it couldn't be better. You always have some doubt because many different things can happen. That's always in the back of you're a mind, but I was very confident in the horse. I don't think we'll change a whole lot. We'll give him 10 days of easiness and then get a few more breezes in him before we go out there (to Churchill Downs). That's about all we can do." 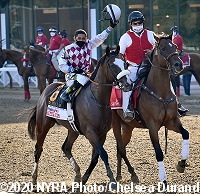 Left: Tiz the Law returns after the race. Winning jockey Manny Franco said, "I didn't expect a race like that, but we'll take it. He ran huge. He was there the whole way for me and I was just waiting for the moment because it is a long way to go - a mile and a quarter - and he hasn't gone that distance before, so I'm trying to save as much horse as I could before I made my move. I had a lot in the tank and I was just trying to save horse, because there's still three or four more races to go, so I have to save some horse. I know now he can go the distance, but he has to run the race."

Right: The horses break from the gate for the Travers. Javier Castellano aboard 2nd place finisher Caracaro (7) said, "My horse only had four races and finished second behind a really good horse today. I think he has some room to improve. I think he's starting to get better and going in the right direction. Hopefully, we hear more from him in the future. He has everything. He's a full-package horse. He has a good mind. He rated beautifully today. I didn't want to hook up with the speed, it seemed to me there was a lot of speed in the race today. I covered up a little bit, let him get dirt to the face and he handled it well." 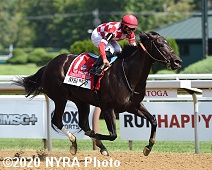 Kicking off the stakes quintet was the $300,000 NYRA Bets Ballerina Stakes (G1) for older fillies and mares sprinting 7 furlongs on the main track, looking for automatic entry to the Breeders' Cup Filly and Mare Sprint. Desert Stormer (G3) winner and Great Lady M (G2) runner-up Bellafina was sent off as the 5-2 favorite in the field of 7. In to challenge her included 3-1 second choice Serengeti Empress, 4th in the Fleur de Lis (G2), and 7-2 third choice Come Dancing, 2nd in the Vagrancy Handicap (G3). 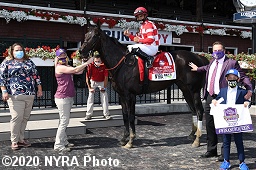 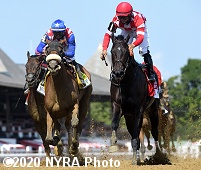 Left: Serengeti Empress in the winner's circle. Winning trainer Tom Amoss said, "She didn't break on time. She was a step slow, but when you go 7/8 and you have that opening on the track before you hit the main track, you get an opportunity to catch up, and she did. She was able to regain her position, but I really thought that opening half-mile in [43.74 seconds] was going to be her doing in.  I thought we learned a lot about her today. What we learned is that this is a real good middle-distance filly. Speed is her game, and she used it today. She was able to hold off a very good filly from California. I've been pointing to this race since she was well-beaten by Midnight Bisou in her last race going a route of ground."

Right: Head on of the finish with Serengeti Empress (inside) and beaten favorite Bellafina (outside). Jose Ortiz aboard Bellafina said, "I had a perfect trip, no excuses. The winner ran a huge race. We tried to keep up and I thought I had her at the top of the stretch, but she's a very nice filly. She won the [2019 Kentucky] Oaks and she's very nice." 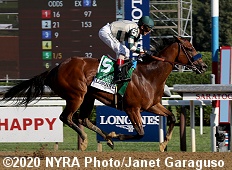 Jockey John Velazquez sent Gamine to the lead out of the chute through fractions of 22.70 and 45.14 while pressed by Venetian Harbor and stalked by Mrs. Danvers. Turning for home Gamine left the field behind, opening up by 3 1/2 lengths midstretch through 3/4 in 1:08.64, and drawing off the rest of the way to win by 7 lengths over Venetian Harbor in 1:20.83, just 43/100 second off the track record. It was another 6 1/2 lengths back to 16-1 Up in Smoke third. 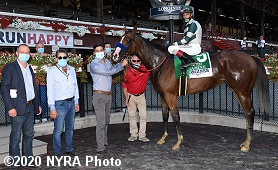 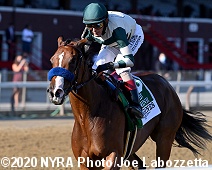 Left: Gamine in the winner's circle. Jimmy Barnes, assistant to winning trainer Bob Baffert said, "She's rising straight to the top. For what she's accomplished so far for such a lightly raced filly, we look forward to stretching her out and see what comes of that."

Right: Gamine at the finish from the inside. Winning jockey John Velazquez said, " If another horse wants to go too fast, we just let her sit second and she'll be fine sitting second. But she broke so good and the other horse [Venetian Harbor, No. 6] kind of stayed right next to me and didn't press the pace very much, so I just kind of let her do what she wanted to do the first quarter-mile. Once we got to the turn, I let her get into the turn and she got really comfortable and really smooth and got away from the other horse and kept going. Very nice. I just let her do whatever she wants to do." 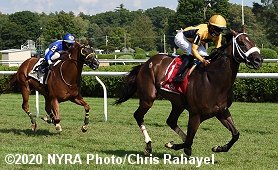 The $200,000 Troy Stakes (G3) featured a field of 7 older horses sprinting 5 1/2 furlongs on the Mellon turf course. Allowance winner Chewing Gum was sent off as the 2-1 favorite over 3-1 Imprimis, unraced since 6h in the Breeders' Cup Turf Sprint (G1), and 7-2 Shekky Shebaz, 3rd in the Wolf Hill. 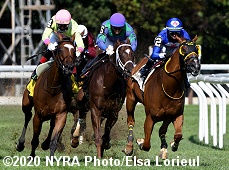 Around the final turn with eventual winner American Sailor on the inside and second place finisher Shekky Shebaz on the outside. Winning trainer Wayne Potts, celebrating his first graded stakes victory said, "I'm speechless. This is my first graded win. My clients have stood behind me through the years with claimers and this is where we're at. I was worried about the late runners coming to get me late but our horse was out pretty quick. We gave him the winter off this year and I had him for about three years and he really needed a break. He really deserved it. He doesn't owe us anything, so we decided to give him a break this year and give him some time off instead of shipping him to Sam Houston for the Turf Sprint. He came back at Laurel and ran a fantastic race in his first race back and then he ran in the Wolf Hill, where he got beat by a nice horse for (Steve) Asmussen. He came out of it well and so I was confident when I brought him up here." 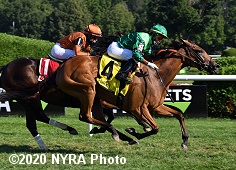 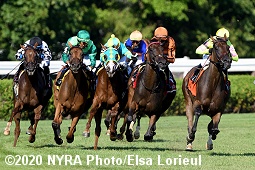 Around the final turn with evenutal winner My Sister Nat (second from the left) and second place finisher and beaten favorite Mrs. Sippy (second from the right). Winning trainer Chad Brown said, "In these types of races, there's not a lot of pace. I thought Jose [Ortiz] came to the paddock with a really good plan. He said he was going to try and stay closer and he was able to find the one during the race to follow which I thought was smart. We didn't change her style, but we stayed with the pack this time and didn't let her fall too far back. Jose deserves a lot of credit for that."