A field of six faced the starter for the 134th running of the Grade 1 Travers Stakes at Saratoga on Saturday. Although the two main stars of the show, Empire Maker and Funny Cide, had both scratched, it was still a quality field gunning for $1 million purse and a large crowd of 66,122 came to see the action. Sent off as the lukewarm 2-1 favorite was Peace Rules, winner of the Haskell Invitational last time out, with Sky Mesa the second choice at 5-2.

As expected, Strong Hope and jockey John Velazquez went straight to the front with Peace Rules to his outside. The pair of speedsters dueled through the first six furlongs through blistering fractions of 23.55, 46.36, and 1:09.98 over the fast main track. At this point Strong Hope quickly faded out of contention. At this point, Ten Most Wanted, who had stalked the pace back in fourth early on, angled out on the far turn to make his move toward the leaders. After a mile in 1:35.46, Ten Most Wanted drew even with the favorite. Turning for home, Peace Rules began to show the effects of the early pace, allowing Ten Most Wanted to wrest the lead from him and draw away to win by 4 1/2 lengths in a final time of 2:02.14. It was another ten lengths back to early pacesetter Strong Hope in third. Second favorite Sky Mesa was slowest out of the gate and was hustled up to stalk the early pace in third, but gave way after seven furlongs.

Check here for the results of the other four stakes races on the card.

First time by with Peace Rules on the lead followed by Strong Hope, Sky Mesa, and Ten Most Wanted. Edgar Prado, jockey of last place finisher and second choice, Sky Mesa, said, "He broke a little slow, but I was able to work him back into a good position. He ran to the half-mile pole, and then just quit." 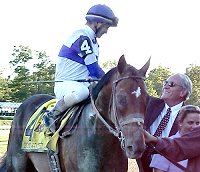 Trainer Wally Dollase congratulates Pat Day after the race. Dollase said, "He's an awesome looking horse and looks so much like his sire (1997 Travers winner) Deputy Commander. I didn't think he would win that easily. I thought the time was good for three-year-olds. It's a real thrill to have an animal like him. I'm really privileged. Right now, this horse is ranked with the best three-year-olds. I would like to keep him with three-year-olds as long as I can. I think he can come back and be a really good four-year- old." 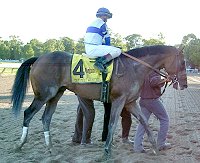 Ten Most Wanted circles waiting to go in the winner's circle. Winning jockey Pat Day said, "Going into the turn, when he changed over to his left lead, he just started extending his stride and picking them up, so I just angled to the outside, got him clear and by the time we got to the quarter pole, he was ranging up on these horses in hand. At that point, I was just concerned about him opening up a sizeable lead and losing his focus like he had done in the Swaps. I restrained him until he changed leads and we were pretty well into the stretch. I let him ease past Peace Rules, and then I just kept him to his task." This was Day's fourth Travers win, tying Eddie Arcaro, Braulio Baeza, and Jimmy McLaughlin for the most by a jockey. 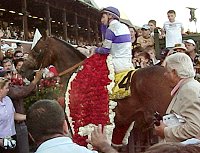 Ten Most Wanted in the winner's circle. It was a zoo in there making it difficult to take any photos. Winning owner Paul Reddam said, "I like to think now that we've got one of the top horses in the three-year-old picture. I'm anxious for Funny Cide to get better and for Empire Maker to get better. Hopefully, they will all hook up together in the Breeders' Cup Classic." 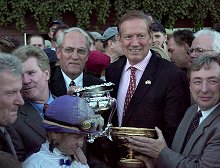 The trophy presentation. Jockey Pat Day said, "I liked the way he was focused and he was going about his business. I've liked the colt all along. I thought he might be slow to mature mentally and physically. He has really come into hand." 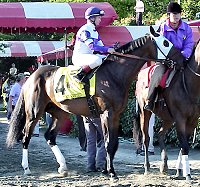 Ten Most Wanted heads out for the post parade. Winning jockey Pat Day said, "I think he's going to better as time progresses and later in the year and even as a four-year-old. I think he's grown and matured dramatically from early in the year to now and I think there's still a considerable amount of room for improvement." 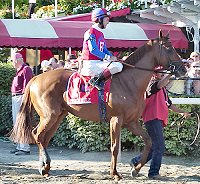 Second place finisher Peace Rules heads out for the post parade. His jockey Jerry Bailey said, "Strong Hope and Peace Rules have got their running shoes one when they're in the gate. They are both aggressive by nature. People don't understand that the more you pull, the more they want to run. Sometimes, you do more damage fighting them, going :47 and pulling on their jaws instead of just letting them run freely. If you have an option you take it, but with these two horses, you don't have an option." 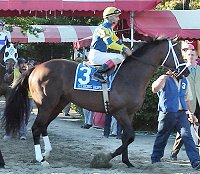 Third place finisher Strong Hope heads out for the post parade. His jockey John Velazquez said, "My horse is very strong-headed, and there was no way I could get him back. I tried my best to get him to settle, but as soon as Peace Rules got next to him, my horse got rank. There was nothing I could do. I thought we were going to out-run peace Rules. I looked back, and he wasn't there. Then, I looked ahead and he was right next to me. It was just too much for him."