The co-feature on on Whitney day at Saratoga was the $500,000 Longines Test Stakes (G1) for 3-year-old fillies sprinting 7 furlongs on the main track. Conditions were ideal with the main track fast and turf courses firm under partly cloudy skies and temperatures in the high 80's. Kentucky Oaks (G1) runner-up and Acorn Stakes (G1) winner Search Results was sent off as the 8-5 favorite in the field of 8. In to challenge her included 3-1 second choice Obligatory, winner of the Eight Belles (G2) before finishing 2nd in the Acorn, and 4-1 third choice Bella Sofia, an allowance winner after finishing 2nd in the Jersey Girl Stakes.

Jockey John Velazquez sent 8-1 Illumination to the lead out of the chute and she set fractions of 22.84 and 45.70 while pressed by Bella Sofia and stalked by 13-1 Souper Sensational and Search Results. Turning for home, Illumination tired allowing Bella Sofia to inherit the lead through 3/4 in 1:09.10. Kept to task by Luis Saez, Bella Sofia drew off late to win by 4 1/4 lengths over Souper Sensational in 1:21.54. It was another 1 1/2 lengths back to favorite Search Results third. 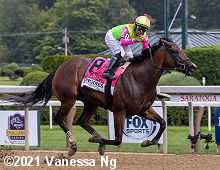 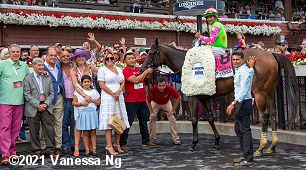 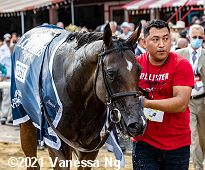 Left: Bella Sofia in the winner's circle. Winning trainer Rudy Rodriguez said, "We just let Luis ride her the way he wants to ride her. We drew a very good post and we're just thankful for the opportunity. I know we asked a lot. We're just happy to have her in the barn. The day she broke her maiden, she put everybody away impressively. She was training good. You know when you draw the outside, you pretty much just let the jockey figure out what they want to do."

Right: Bella Sofia heads back to the barn. Rodriguez added, "She broke better than anybody. I thought she was going to be out front when she broke that good. She was nice and comfortable and she was running very well for him and when he asked her, she was there for him. To win on Whitney Day is extra special, for sure." 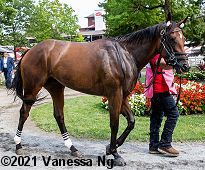 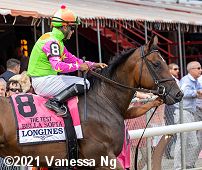 Left: Bella Sofia in the paddock. Winning jockey Luis Saez said, "She broke perfectly. We were looking for that spot right there to sit and make a run into the stretch. She did it so well and so beautifully. She came through the stretch pretty smoothly. I knew [Illumination] had some speed, so the plan was to break from there, relax and make one move with her. She's a pretty nice filly."

Right: Bella Sofia heads out to the track before the race. 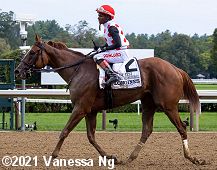 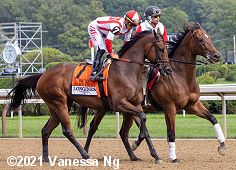 Left: Second place finisher Souper Sensational returns after the race. Jockey Ricardo Santana Jr., said, "I had the trip. You couldn't ask for a better trip than that. She was-second best, that's all there is to it." Trainer Mark Casse added, "I thought she was very live. I was surprised at her odds, but she ran well and I was proud of her." 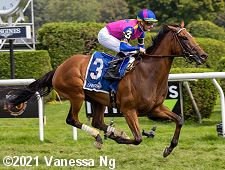 Immediately before the Test, the $250,000 Glens Falls Stakes (G2) featured a field of 7 older fillies and mares going 1 1/2 miles around 3 turns of the inner turf course. War Like Goddess was sent off as the 4-5 favorite off wins in the Orchid (G3) and Bewitch (G3). In to challenge her included 4-1 second choice My Sister Nat, 3rd in the New York (G2), and 9-2 third choice Dalika, winer of the R.G. Dick Memorial (G3) at Delaware Park. 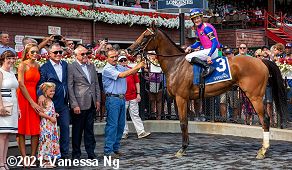 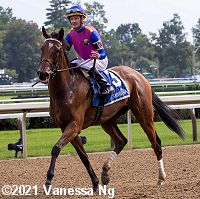 Left: War Like Goddess in the winner's circle. Winning trainer Bill Mott said, "She ran well. We freshened her up a little bit and brought her back today. She moved forward for us and beat a nice bunch of fillies today. Our filly was pulling a little bit and they were going slow up front, so you always hope they can close into that slow kind of pace. She was good enough. I saw a good finish similar to what we saw in the Bewitch."

Right: War Like Goddess returns after the race. Winning jockey Julien Leparoux said, "She gave some kick in the end. I think today she broke good. We got bumped, so we were last because of the little bump in the beginning. But she still had the kick, so that was nice to see. I think she's going improve for it.  She's very nice. I think she can endure any kind of ground and even when she was pulling a bit on me early on, she's fresh. She had a very nice kick, so I'm very excited to be able to ride her. She felt great. 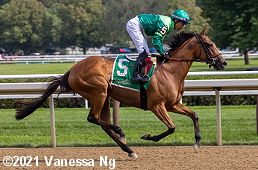 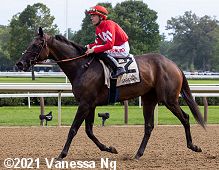 Left: Second place finisher My Sister Nat warms up before the race. Jockey Jose Ortiz said, "I had a good trip, but honestly, when I took back a bit, I knew it was going to be tough to beat the winner. My horse tried hard, but she was second-best." 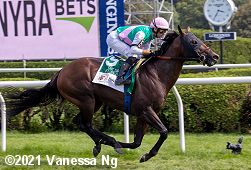 Kicking off the Saturday stakes quintet, the $120,000 Fasig-Tipton Lure Stakes featured a field of 8 older horses (after 4 scratches) going 1 1/16 miles on the Mellon turf. Frank Kilroe Mile (G1) 4th place finisher Flavius was sent off as the 6-5 favorite over 3-1 Delaware, 3rd in the Forbidden Apple (G3), and 13-4 Dreams of Tomorrow off 2 allowance wins. 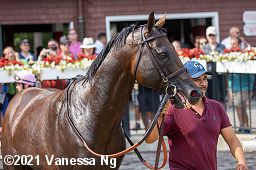 Left: Flavius in the winner's circle. Winning trainer Chad Brown said, It took a little time to get him back in form, but I loved his race today. I appreciate Flavien taking the initiative of taking it to them early. This horse switched off nicely down the backside and it seemed when he had his ears up moving comfortably down the backside, so I knew he had a big chance. He ran lights out today. It was an impressive performance."

Right: Flavius heads back to the barn after the race. Garrett O'Rourke, general manager of winning owner Juddmonte Farms' U.S. division said, "This has a been a horse that we brought over here with expectations that he could move up to the next level, and he's gotten close to this level. I think today his race was perfect. It's nice to keep horses like this a little bit longer in training and when they reward you it makes it worthwhile." 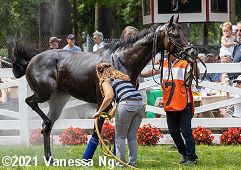 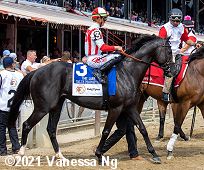 Left: Second place finisher Tell Your Daddy in the paddock before the race. Jockey John Velazquez said, "He ran real good and gave me everything he could. We got a good position. The winner was a little bit better than us."

Right: Third place finisher Value Proposition heads out for the post parade. Trainer Chad Brown said, "Unfortunately, when he stepped on to the turf course and was behind the gate waiting to load, he stepped on himself and popped his shoe off. He was safe to run. He still ran a really good race to run third. Those things happen. We've had several horses lose shoes after a race before but it's weird to happen right before the race. It's unfortunate for that horse and it probably affected him a little bit. He put in a good effort and I'm proud of him."

Also on the card: The Whitney and Saratoga Derby