The co-feature on on Whitney day was the $500,000 Test Stakes (G1) for 3-year-old fillies sprinting 7 furlongs on the main track. Acorn (G1) winner Sweet Reason was sent off as the 2-1 favorite in the field of 9. In to challenge her included 4-1 second choice Southern Honey, winner of the Winning Colors (G3), and 5-1 Fiftyshadesofgold, winner of the Eight Belles (G3) then fourth in the Acorn.

Fiftyshadesofgold battled for the lead with Southern Honey through opening fractions of 22.66 and 45.44 while stalked by 15-1 Miss Behaviour and 11-2 Sweet Whiskey. As Southern Honey tired, Fiftyshadesofgold continued to lead through 3/4 in 1:09.63. Sweet Reason, 7th early, came out 3 wide for room to win by 1 length over Miss Behaviour in 1:22.31 over the fast main track. 25-1 Little Alexis closed from 9th to get third, just missing second in a photo. 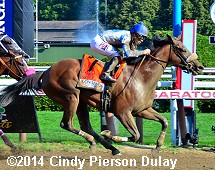 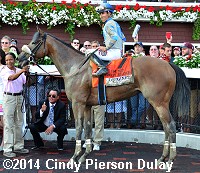 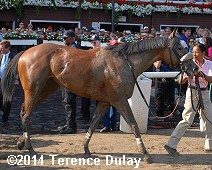 Left: Sweet Reason in the winner's circle. Trainer Leah Gyarmati said, "She loves Saratoga, she's shown she likes 7/8, her one-turn mile (Acorn) at Belmont was great, she came out of that race great, so this was the logical spot. I was very excited about running her here. It came up a very salty field with some really nice fillies in the race, so this was probably her biggest test yet, in my opinion. She was doing really well so win, lose, or draw, I felt I'd done everything I could and she was as good as I could get her. I went in feeling good about the race."

Right: Sweet Reason heads back to the barn. Jockey Irad Ortiz Jr. said, "She was perfect. She broke from behind, relaxed and when I asked her to go, she just took off." 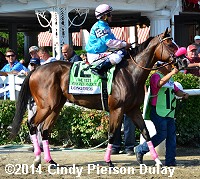 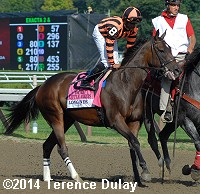 Left: Second place finisher Miss Behaviour heads out to the track. Jockey Javier Castellano said, "I'm very satisfied the way she did it. Second-best today. Beautiful spot. Great trip. Dream trip. That's where I wanted to be. Two horses made the pace. I'm third, outside - beautiful spot. That's where I wanted to be. Turning for home I asked her; turned her on and said, 'Let's go.' She gave me everything she had. I give a lot of credit to the winner."

Right: Third place finisher Little Alexis in the post parade. The 25-1 shot was unhurried under jockey Jose Lezcano then rallied to get third beaten a length, but a nose back of second. The Donna Green trainee improved her record to 2 wins and 1 third in 3 starts, earning $117,710 for owner Priscilla Vaccarezza. 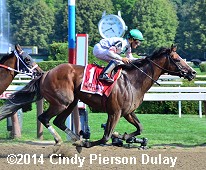 Kicking off the Grade 1 trio on Saturday was the $350,000 Alfred G. Vanderbilt Handicap (G1) for older horses sprinting 6 furlongs on the main track. Maryland Sprint Handicap (G3) winner Happy My Way was sent off as the 8-5 favorite in the field of 7. In to challenge him included 2-1 second choice Palace, winner of the True North (G2), and second in the Belmont Sprint (G3), and 13-2 third choice Falling Sky, winner of the Don LeVine Memorial Handicap.

Jockey Joe Bravo sent Happy My Way to a clear lead down the backstretch through fractions of 22.13 and 44.49 while as many as 2 1/2 lengths in front of Palace in second. Happy My Way led to the 1/8 pole but Palace, 4 wide into the lane, outfinished him through the final furlong to win by a length in 1:08.56. I was another 2 1/2 lengths back to Falling Sky third.
Results chart 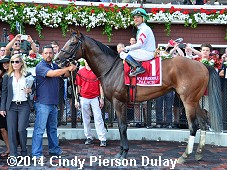 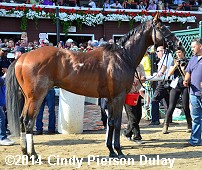 Left: Palace in the winner's circle with trainer Linda Rice on the left. Rice said, "I was a little concerned about the No. 1 post position. It's not ideal. It looked like he broke a step slow, so I was a little concerned at that point. It looked like Happy My Way was on a loose lead. Obviously, I was somewhat concerned, but this horse is such a competitor. He's got the heart of a lion. Cornelio went after (Happy My Way) early, and he was able to run him down in the stretch. This horse really has a strong finish, and once he switched to his right lead I knew that he would get to him."

Right: Palace heads back to the barn after the race. Jockey Cornelio Velasquez said, "When I broke good, I stayed in behind Happy My Way. I wanted to wait for the last 3/16, and have him come in the end. He came fast. He's a very good horse." 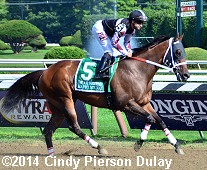 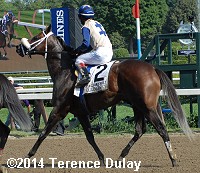 Left: Second place finisher and beaten finisher Happy My Way in the post parade. Trainer Joe Orseno said, "Very happy with that. I said all along, he needed a freshener. We were going to do it now. We gave him 2 1/2 months off after that last race. I did not lean on him very hard to get him ready for this because my big picture is November. I told Joey [Bravo], 'Nurse him along as far as you can, but you've got to have some horse left.' Again, the grand scheme of things for me is November. He proves today he belongs. I'm ecstatic. Of course we'd like to win, but all the connections understand what we did and where we're at." 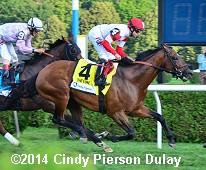 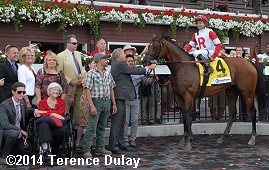 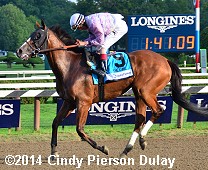 Left: Big Blue Kitten in the winner's circle. Trainer Chad Brown said, "What a great horse. I wasn't quite sure if I had him fit enough off the layoff, but it seemed like a good spot to get him started. I told Joe if he won, it'd be terrific, but as long as he finished well we had some big plans for this horse later in the year. Lo and behold, he got through anyway on heart." 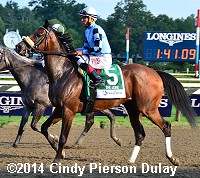 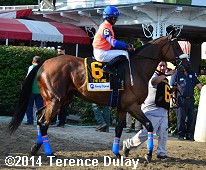 Left: Co-third place finisher in a dead heat Legendary returns after the race. The Niall Saville trainee improved his record to 4 wins, 5 seconds, and 2 thirds in 17 starts, earning $115,719 for owner Walter Swinburn.

Right: Co-third place finisher in a dead heat Plainview heads out for the post parade. The Greg DiPrima trainee improved his record to 8 wins, 4 seconds, and 4 thirds in 31 starts, earning $440,091 for owners Jesse Iglesias and Mike Imperio.

Also on the card: The Whitney and Del La Rose Stakes