The first stakes race on Travers day was the $500,000 Test Stakes (G1) for 3-year-old fillies sprinting 7 furlongs on the main track. Sweet Lulu was sent off as the 9-5 favorite in the field of 8, undefeated in 3 lifetime starts in California and making her stakes debut here. In to challenge her included 2-1 second choice My Happy Face, second in the Coaching Club American Oaks (G1) after winning the Lotka Stakes, and 7-1 third choice Wildcat Lily, second in the Prioress (G1) after winning the Azalea (G3).

Jockey Javier Castellano sent 19-1 Baby J to the lead and she set fractions of 22.28 and 44.95 while pressed by Sweet Lulu and stalked by Wildcat Lily. Entering the stretch, Baby J tired as Wildcat Lily gained a short lead on Sweet Lulu through 3/4 in 1:10.07. The pair dueled to the line, where Sweet Lulu pushed her head in front to get the win in 1:23.45 over the fast main track. It was another neck back to late-running My Happy Face third. 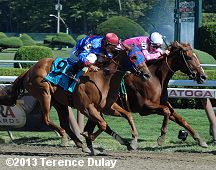 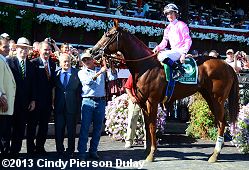 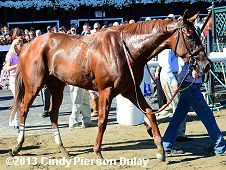 Left: Sweet Lulu in the winner's circle. Trainer Jerry Hollendorfer said, "I was a little concerned when she got headed, and then Julien rode hard and she came back, fought back and won. She's done everything we've asked her to do. I didn't know if I should ship her this soon and come back here and try this, but she was doing so well and showing speed, and this is a Grade 1 and a very important race for pedigree, so we decided to try it."

Right: Sweet Lulu heads back to the barn. Jockey Julien Leparoux said, "The speed is pretty good today, so we wanted to have a clear trip on the lead or somewhere close. We got a perfect trip. Johnny (Velazquez, aboard Wildcat Lily) came to me, and it looked like he came maybe even in front of me, and she fought back and came back to win." 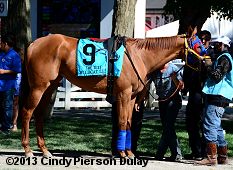 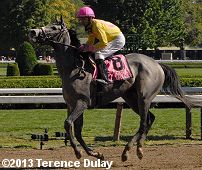 Left: Second place finisher Wildcat Lily in the paddock before the race. Jockey John Velazquez said, Tough beat. She ran great. I thought I had them, but the horse on the inside had a little something left and it was probably a little too far for my filly."

Right: Third place finisher My Happy Face returns after the race. Trainer Chad Brown said, "She ran huge. Unfortunately, there were a lot of horses stopping at the 1/4 pole. Mike (Smith, jockey) just felt that there were a lot of tired horses ahead of him and they all decided to stack themselves across the track, trying to give themselves the best shot they could. Unfortunately it spun us 7, 8, 9 wide. She ran her race; it's just one of those things when you have a big field in horse racing." 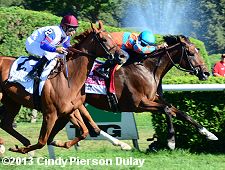 The $250,000 Ketel One Ballston Spa Stakes (G2) featured a field of 8 older fillies and mares going 1 1/16 miles on the inner turf course. Hungry Island was sent off as the 2-1 favorite, third in the Just a Game (G1) after finishing second in the Churchill Distaff Turf Mile (G2). In to challenge her included 11-4 second choice Laughing, winner of the Diana (G1) and the Eatontown (G3), and 3-1 third choice Centre Court, fifth in the Diana (G1) last out.

Jockey Jose Lezcano sent Laughing to the lead first time by and she set fractions of 23.89, 48.41, and 1:12.39 while pressed by 6-1 fourth choice Pianist to her outside. On the far turn, Pianist moved up to challenge, setting up a duel to the line. Laughing continued to hold the lead through 1 mile in 1:34.79, and refused to give in, winning by a hard-fought neck in a time of 1:40.37 over the firm course. It was a long 2 3/4 lengths back to 24-1 Hard Not to Like third, and another length to favorite Hungry Island fourth.
Results chart 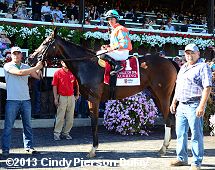 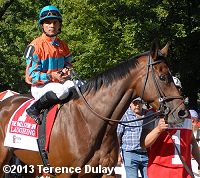 Left: Laughing in the winner's circle. Trainer Alan Goldberg said, "It was a great race. She ran well, and hopefully she'll come back well. She's a trier. She's real healthy now and I think she'll be a pretty good force in the filly and mare division. She's pretty tough. I actually thought she would do it. The other filly hung in there pretty good. Looking at her form, it looked like Pianist wanted to have the lead. She'd run her best races on the lead. It was a good horse race; it turned out really well."

Right: Laughing in the walking ring before the race. Jockey Jose Lezcano said, "I figured to be up there with the pace. I let her break, and go from there. I liked the trip. She jumped a little in the bit, but when I asked at the 1/4 pole, she took off. It was kind of the same trip as the Diana. She felt comfortable and I let her do whatever she wanted. She is a very nice filly." 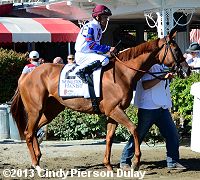 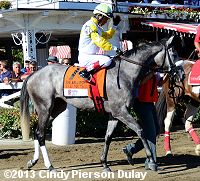 Left: Second place finisher Pianist heads out to the track before the race. Jockey Mike Smith said, "She loves the hard ground. She tried so hard, the other mare just outgamed me, man. She's just tough. I thought I had her. I got a neck in front of her and she fought back. You have to take your hat off to her." Trainer Chad Brown added, "We were just second best today. Laughing is tough. This is three times in a row I have been second to her with three of my best fillies."

Right: Third place finisher Hard Not to Like heads out to the track. The 24-1 longshot stalked the pace third under jockey Edgar Prado, but could not improve late finishing third beaten 3 lengths. The Michael Matz trainee improved his record to 4 wins, 2 seconds, and 1 third in 13 starts, earning $513,304 for owner Hillsbrook Farms. 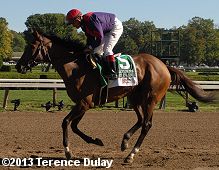 Fourth place finisher and beaten favorite Hungry Island returns after the race. Jockey Javier Castellano said, "The only way I got beat today was because the track is so fast. You don't see horses coming from behind. I think we just got beat because the horse that went to the lead never stopped, and my horse is a come-from-behind horse."