The highlight of the Tampa Bay Downs racing season is the $400,000 Lambholm South Tampa Bay Derby (G2) at 1 1/16 miles on the main track. It is the major local prep for the Triple Crown series and worth 50 points to the winner as part of the Kentucky Derby Championship Series. Conditions were excellent at the Oldsmar oval, with 5,381 fans on hand under sunny skies and temperatures in the high 50's, however morning rain downgraded both main track and turf course to "good". A new all-time Tampa Bay Downs record handle of $20,778,222 was set, of which $3,686,488 was bet on the 42nd renewal of the Tampa Bay Derby, carded as the 11th and final race of the card.

Kentucky Jockey Club (G2) runner-up Classic Causeway was sent off as the 4-5 favorite in the field of 10 off his win in the Sam F. Davis (G3). In to challenge him included 4-1 second choice Major General, undefeated but unraced since winning the Iroquois (G3) in September, and 9-2 third choice Shipsational, 2nd in the Sam F. Davis after winning the Sleepy Hollow at Belmont. 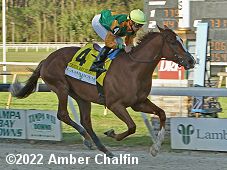 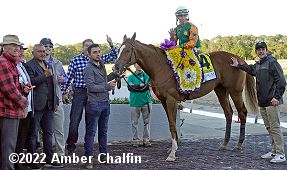 Left: Classic Causeway in the winner's circle. Winning trainer Brian Lynch said, "It's pretty exciting stuff. He's just come into his own right now and just to watch him, he seems like a happy horse that enjoys his job. He's very, very good right now." He will go next in the Blue Grass Stakes on April 9.

Right: The trophy presentation for the Tampa Bay Derby. Winning jockey Irad Ortiz Jr. said, "He gave me the same performance again (as in the Sam F. Davis). He broke good, he gave me good position and I just went from there. He was traveling perfect all the way to the 3/8-mile pole. When I asked him, he was there. Getting close to the wire, he was looking around a little bit, but I felt I had a lot more horse. He's acting like he can carry his speed more, up to 1 1/4. These last couple of races he's been acting after the wire like he still has more left. I don't want to jinx it, but I think there is something more there." 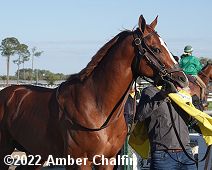 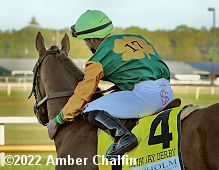 Left: Classic Causeway in the paddock before the race. Ortiz added, "He's great when he leaves the gate because you don't have to use him. You don't have to ask him to do anything. He does it by himself, then he relaxes going into the first turn and on the backside. He waits for you. He's a smart horse."

Right: Classic Causeway returns after the race. Lynch added, "He has always been a very good gate horse and he's a horse that actually loves the gate and is excited to walk into it. And as soon as they pop, he's off. That early speed is a great asset to have because you're going to stay out of trouble when you can break fast and clear. When you have a horse that can run them off their feet early, get a chance to take a breather and relax and still be able to finish, that is a great asset in a horse." 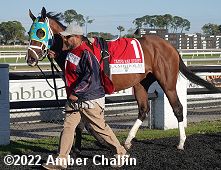 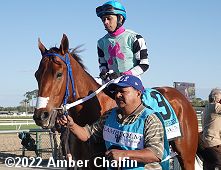 Left: Second place finisher Grantham in the paddock before the race. The Mike Maker trainee improved his record to 1 win, 2 seconds, and 0 thirds in 4 starts, earning $146,200 for owner Three Diamonds Farm. 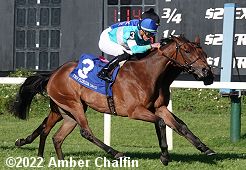 A field of 9 three-year-old fillies went to post in the $200,000 Florida Oaks (G3) at 1 1/16 miles on the turf. Aqueduct maiden winner Spicer was sent off as the 2-1 favorite over 3-1 second choice Dolce Zel, winner of the maiden Prix de la Faisanderie at Longchamp, and 7-2 third choice Ambitieuse, second in the Sweetest Chant (G3) at Gulfstream. 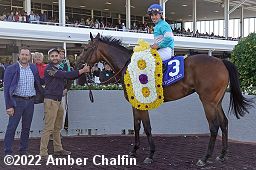 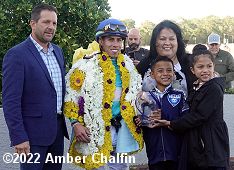 Left: Dolce Zel in the winner's circle. Winning jockey Irad Ortiz Jr. said, “I had a perfect trip, to be honest. I was in beautiful position going into the first turn,” said Ortiz after the race. “Up the backside I followed the horse to beat, and that was (stablemate Spicer). She’s a real nice filly so I had her like a target."

Right: The trophy presentation for the Florida Oaks. 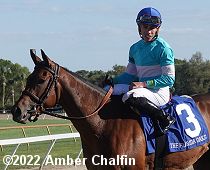 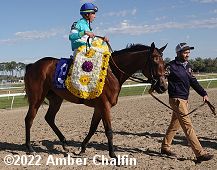 Left: Dolce Zel returns after the race. Ortiz added, "By the far turn it looked like I was in good position and ready to roll, but Chad told me that when she makes the lead early she can wait on horses. So I was ready for that. When she hit the lead, she kind of waited a little bit for the other horses, so I hit her one time and she responded very well. She looks like a nice filly. She was ready today and she did everything right.” 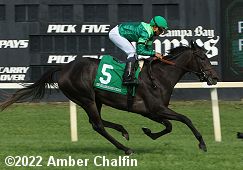 Kicking off the Saturday stakes quintet was he $225,000 Hillsborough Stakes (G2) featuring 9 older fillies and mares going 1 1/8 miles on the turf. Endeavour Stakes (G3) winner and undefeated Bleecker Street was sent off as the 5-2 favorite over 3-1 second choice Lady Speightspeare, 2nd in the Endeavour, and 4-1 third choice Runaway Rumour, 2nd in the Sands Point (G2) but 5th in the Winter Memories.

Jockey Daniel Centeno sent 11-1 Gladys to the lead out of the chute through fractions of 23.20, 46.80, and 1:11.46 while pressed by Lady Speightspeare and stalked by 9-2 fourth choice Rocky Sky. Turning for home Gladys continued to lead through 1 mile in 1:36.69 but was tiring. Bleecker Street, 7th early under Hector Diaz Jr., came out 4 wide into the lane and rallied to win going away by 3 3/4 lengths over Rocky Sky in 1:48.21. It was another 3/4 length back to Gladys third. 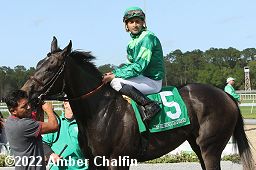 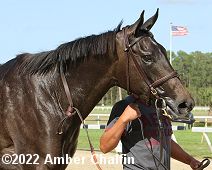 Left: Bleecker Street heads to the winner's circle. Winning jockey Hector Diaz Jr. said, "She's the best filly I've ever ridden. I rode her really confident because I know what she is capable of doing. No pressure. I was just waiting for the moment to switch outside because I knew she was going to run. She's really easy to ride. When you ask her to go, she accelerates. She has an amazing turn of foot. The course was softer than she likes, and that tells me how good she is."

Right: Bleecker Street heads back to the barn after the race. Winning trainer Chad Brown said, "We were on the fence about sending her because I wasn't that confident how she would handle soft turf, but by the time we loaded them from Payson Park this morning it looked like the rain was moving through quicker and the wind might dry out the course. She really loves Tampa, so we decided to give it a shot. She was super impressive and handled the give in the ground well. It certainly looked like the added distance didn't bother her, so hopefully she can keep stepping up." 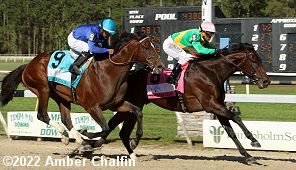 Jockey Paco Lopez sent Wolfie's Dynaghost to the lead first time by through fractions of 23.53, 48.14, and 1:12.89 while pressed by 28-1 longest shot Tune In and stalked by 4-1 Scalding. In the lane Wolfie'd Dynaghost tired as Scalding and jockey Javier Castellano swept to the front 3 wide. Favorite Cody's Wish put in a strong rally from 5th but Scalding held him off to win by a neck in 1:43.53. It was another 2 1/4 lengths back to 4-1 fourth choice Dynamic One third. 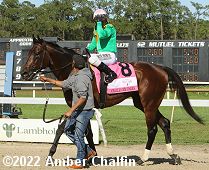 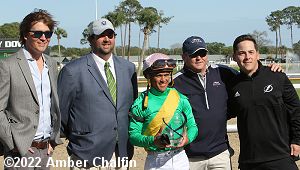 Left: Scalding heads to the winner's circle. Winning trainer Shug McGaughey said, "It's a big job going from an allowance/other than condition to this spot, but we've always liked this horse. He has been training forwardly and from what we saw today, his future is definitely (bright). He had a race over the track, and I think that probably helped him. He is a pretty talented number and his last two races had been so good, with a little encouragement from the owners we decided to take a shot, and it worked."

Right: The trophy presentation for the Challenger Stakes. Winning jockey Javier Castellano said, "I like the way he did it today. He's straightforward. When I asked him he responded really well. He passed the pacemaker and the horses on the lead, and he was comfortable coming from behind. and I like the way he finished." 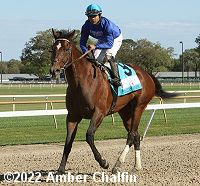 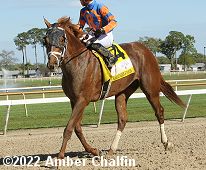 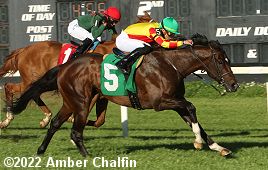 Immediately before the Tampa Bay Derby was the $75,000 Columbia Stakes with a field of 9 three-year-olds going 1 mile on the turf. Jockey Jesus Castanon sent 55-1 Grumley to the lead through fractions of 23.88, 48.67, and 1:13.80 while pressed by 4-1 third choice Heaven Street and stalked by 93-1 longest shot Night Jumper. In the stretch, Grumley tired badly as Heaven Street took over 3 wide through 7f in 1:25.98. Kept to task by Irad Ortiz Jr., Heaven Street pulled away to win by a length over late-running 13-1 Bens Malice in 1:37.78. It was another 3/4 length back to 5-2 second choice Fort Washington third, while 2-1 favorite Kitten Mischief failed to rally and checked in 6th beaten 4 lengths. 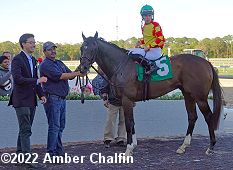 Heaven Street in the winner's circle. Miguel Clement, assistant to trainer and father Christophe said, "I thought Irad gave him a lovely ride. He clearly had the ability to do this, and he has the kind of tactical speed that is very dangerous on the turf."