The highlight of the Tampa Bay Downs racing season is the $350,000 Tampa Bay Derby (G2) at 1 1/16 miles on the main track. It is the major local prep for the Triple Crown series and worth 50 "Kentucky Derby Championship Series" points to the winner. Conditions were ideal at the Oldsmar oval, with 10,359 on hand enjoying sunny skies and temperatures in the mid 60's. Conquest Titan, second in the Holy Bull (G2) last out, was sent off as the 5-2 favorite in the field of 10 over 9-2 second choice Hy Kodiak Warrior, third in an allowance at Gulfstream last out, and 5-1 third choice Vinceremos, winner of the Sam F. Davis (G3).

Jockey Daniel Centeno sent 14-1 longshot Ring Weekend to the lead first time by and he set fractions of 23.62, 46.68, and 1:11.41 while about 4 lengths clear of 6-1 Surfing U S A. Entering the lane, Ring Weekend continued to lead, getting the mile in 1:37.04. Vinceremos, 4th early under Edgar Prado, put in a late rally but Ring Weekend won easily by 3 lengths in 1:43.71 over the fast main track. It was another 3/4 length back to Surfing U S A third, and a length more to late-running favorite Conquest Titan fourth. 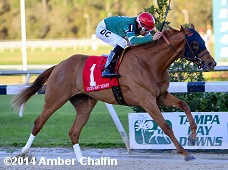 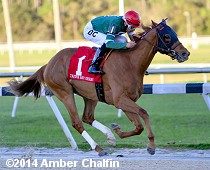 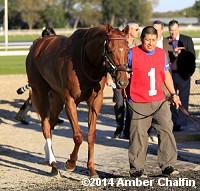 Left: Ring Weekend in the stretch. Winning jockey Daniel Centeno, celebrating his second Tampa Bay Derby win, said, "When I got to the first turn, it was like (Ring Weekend) got mad at me for not letting him run. He wasn't rank, he was just full of himself and I had to give him his head. On the backside, when I looked back and saw I was in front by so many lengths, I started talking to him more, from the half-mile pole to the quarter pole, to get him to relax more. He was galloping out after the race all the way to the backside, and when he came back he wasn't even blowing hard. The way he ran, in his first time on this track, he looks like a very nice horse."

Right: Ring Weekend in the paddock. Terry Finley of ownership group West Point Thoroughbred said, "We were all set to go to Laurel, but Graham (Motion, trainer) called me Monday – we have the kind of relationship where we both kind of test each other out – to see if either of us was strong either way. Then we got word Kiaran (McLaughlin's) horse, Baratti, was running at Laurel, and on paper he has run faster than all these, so we decided to enter here. Funny how those things work out." 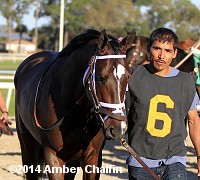 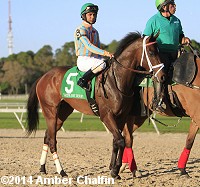 Left: Second place finisher Vinceremos in the paddock. Jockey Edgar Prado said, "He did everything just right. We got good position tracking the group behind the leader. He was relaxed running with other horses like he usually is and when I asked him to run, he ran past horses quickly. But the winner was gone."

Right: Fourth place finisher and beaten favorite Conquest Titan in the post parade. The 5-2 choice raced 6th early under jockey Shaun Bridgmohan but evened out late to finish fourth beaten 4 3/4 lengths. The Mark Casse trainee has a record of 2 wins, 1 second, and 0 thirds in 7 starts, earning $208,995 for owner Conquest Stables. 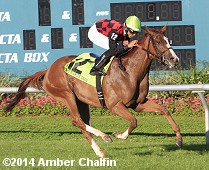 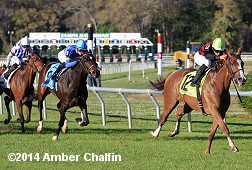 Winning trainer Chad Brown said, "Jose rode a terrific race. He was really prepared when he came to the paddock and said he wanted to try to leave out of there and drop in a little closer this time – she's capable of doing that now that she has run in this country a couple of times. He said ‘If it doesn't work out, I'll tuck her in back, but let me try that.' So he had a plan and it worked, and she has been training great up to the race." Lezcano added, "I didn't think being in the 12 post would be a problem. We broke really well and I was able to get over and get her to relax before we got to into the first turn. After that, it was just waiting on the leaders and keeping her out of trouble. She was very much on her own in the late run. 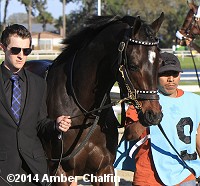 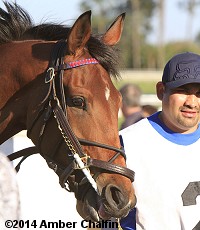 Left: Second place finisher Istanford in the paddock. Jockey Joe Rocco Jr. said, "This is a good filly and she showed that today. I got her to the front and she was going along easily without any pressure. When we hit the stretch, I didn't think there was anything could run us down. When the winner came to us she dug in and did her best. It took a very good filly to beat us." 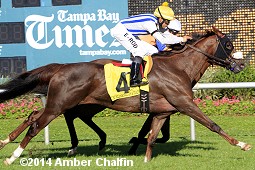 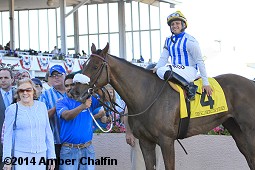 Winning trainer Graham Motion said, "It was a tough race for her because there was no speed in here, and we knew it was going to be awkward for her. We were lucky that (Donna's Fly Girl) slipped through on the inside so she had someone to follow, because when she is on the lead she starts looking around. She ran a big race. I think this mare could really go on and have a big year." Owner Josephine Abercrombie added, "She really has done well here, hasn't she? We're just delighted. We hoped a lot for her, but she's done better than we thought she might."