The highlight of the Tampa Bay Downs racing season is the $350,000 Tampa Bay Derby (G3), the major local prep for the Triple Crown series and worth 50 "Road to the Kentucky Derby" points to the winner. Conditions were ideal at the Oldsmar oval, with 10,476 on hand enjoying sunny skies and temperatures in the mid 70's. As expected, Verrazano, undefeated in 2 starts and making his stakes debut, was sent off as the 2-5 favorite in this 1 1/16 mile main track test. In to challenge him included 9-2 second choice Dynamic Sky, second in the Sam F. Davis (G3) after winning the Pasco, and 10-1 third choice Purple Egg, undefeated in three starts including the Inaugural last out.

Jockey Jose Espinoza sent Falling Sky to the front first time by, getting the opening quarter in 23.50 before Verrazano took over on the backstretch, setting fractions of 47.69 and 1:12.36 while a length in front of Falling Sky and Dynamic Sky. Entering the stretch, jockey John Velazquez asked Verrazano for run and the favorite quickly opened up a 3 1/2 length lead midstretch through a mile in 1:37.56, finishing up under wraps 3 lengths in front of late-running 32-1 Java's War in 1:43.96. It was another 4 1/4 lengths back to Falling Sky third. 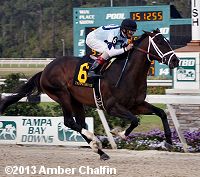 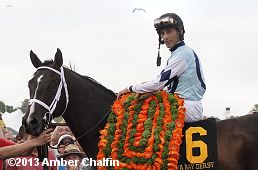 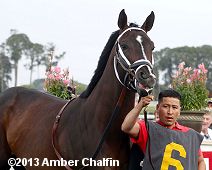 Left: Verrazano in the winner's circle. Trainer Todd Pletcher said, "He has had some freakishly good performances and some of the things he does in the morning in his training, we don't see too often. He stumbled a little bit leaving the gate, but he seemed to recover quickly and put himself in a good spot. Once John got him to the middle of the track and got him to settle, it looked like he was very relaxed throughout. When he made the lead, he kind of pricked his ears like he tends to do and seemed like he was waiting a little on the competition." 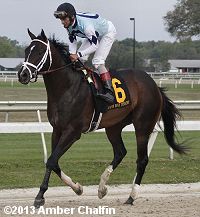 Verrazano returns after the race. Jockey John Velazquez said, "He cut himself a bit. I asked him for run right away, so we wouldn't get left, and when he got to the front I was able to get him to settle. Down the backstretch I had a lot of horse and I just let him do his thing. I asked him for something in the turn, and he had as much as I thought he would. He was running very strong to the finish." He will go next in the Florida Derby, Wood Memorial, or Arkansas Derby. 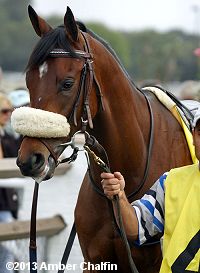 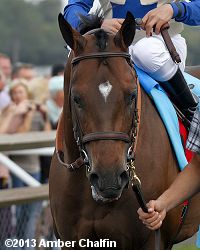 Left: Second place finisher Java's War in the paddock before the race. Trainer Ken McPeek said, "He ran really well. He just hooked a freak on the front end. No disgrace." He may start next in the Blue Grass Stakes or the UAE Derby. 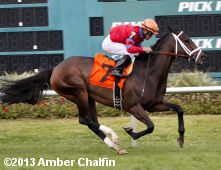 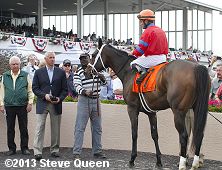 Winning jockey Joel Rosario said, "She just keeps getting better. She broke well and I asked her for just enough to stay in the lead early on. The pace was just right and we were just cruising along. There was pressure from the outside entering the stretch and like last time, I touched her and she showed me another game run down the stretch. I said she would be special this year and she showed me more again today." 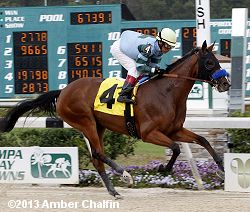 Kicking off the stakes action on Tampa Bay Derby Day was the $100,000 Suncoast Stakes for 3-year-old fillies going 1 mile 40 yards on the main track. Jockey Edgar Prado sent even-money favorite Manuka Honey to the lead first time by and she clicked off fractions of 24.75, 49.19, and 1:14.04 while stalked by 27-1 Wild About Irene. At the top of the stretch, Manuka Honey powered away from the rest of the field, finishing 7 1/4 lengths ahead of Wild About Irene in 1:41.75. It was another 1 1/4 lengths back to 5-2 second choice Cindys Casino.

Winning trainer John Terranova said, "What led us to the dirt was she had shown good, high cruising speed, but just didn't have that quick turn of foot like a good turf filly who could put them away. She was always competitive, but we felt she didn't have that burst she needed to get to the next level on the turf. She had a tremendous breeze after her Gulfstream win, so it was a no-brainer to go into this spot. I left the strategy up to Edgar. With a filly with that kind of class and ability, you don't want to get in her way, and you don't have to tell Edgar much."