The Tampa Bay Derby Festival is the biggest day of the season at Tampa Bay Downs, with some of the best three year olds on the east coast shipping in for the year's two marquee races, the Grade 3 $250,000 Tampa Bay Derby and the $150,000 Florida Oaks. The third-largest crowd in Tampa Bay Derby history -- 8,131 -- showed up and helped set a handle record of $5,353,782.

The Tampa Bay Derby drew a field of eight, with Triple Crown hopeful Limehouse sent off as the 9-10 favorite, with regular rider Pat Day in to ride. When the gate opened, Patrick Husbands sent his mount Very Formal M.D. straight to the front, and the 27-1 longshot led the field through fractions of 23.69, 47.78, and 1:11.90. Favored Limehouse was always in contention, staying out of trouble off the rail, while 2-1 second choice Swingforthefences dueled with the leader. Turning for home, Very Formal M.D. continued to hold the lead as Limehouse came out four wide to begin his rally. Down the lane, the pacesetter succumbed to the quick pace and faltered inside the 1/8 pole, as Limehouse and late-closing 7-1 shot Mustanfar went right on by. Limehouse held off Mustanfar to win by a neck in a time of 1:43.99 for the 1 1/16 mile feature, just 0.33 seconds off the stakes record set in 2000. It was another length back to Swingforthefences in third. Results Chart 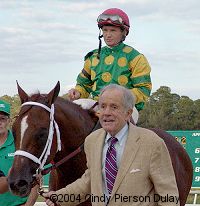 Dogwood Stable president Cot Campbell leads Limehouse with jockey Pat Day aboard into the winner's circle. Pat Day said, "He was very professional. He warmed nice, broke well, was comfortably placed at all times and ran over the track pretty well. At about the seven sixteenths pole he went to scrambling just a little bit but got on his feet quickly and held his position. Off the [second] turn I put him to the task and he responded beautifully. He got by the leaders then got to waiting just a little but he got back into it right about the 1/16 pole as the competition heated up and he went up." Trainer Todd Pletcher said, "I was a little concerned at one point but I know this horse's style and Pat's style as well. He always saves some horse for the end. I'll see how he comes back and sit down with Mr. Campbell (owner Dogwood Stable president Cot Campbell) later this week and talk about our options but the Blue Grass would be the logical choice since he's already won a stakes at Keeneland." 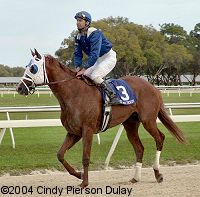 Second place finisher Mustanfar returning after the Tampa Bay Derby. Assistant trainer Neal McLaughlin said, "I just got off the phone with [brother and trainer] Kiaran and he couldn't be happier with the way our horse ran. It looks like we got pinched right out of the gate but then he got the run of the rail and he put in a great run." 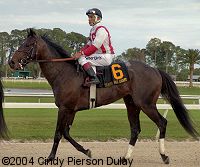 Third place finisher Swingforthefences returning after the Tampa Bay Derby. His trainer Rick Violette said, "He was wired in the paddock then got really wound up and kind of lost it on the racetrack prior to the race. As a result he was probably more forwardly placed than he wants and I'm not sure that's his best style. But with all of that he was beaten only a length in a very fast time."

In the Florida Oaks, Pat Day was also aboard the favorite, 13-10 shot Ender's Sister. In the early stages, Edgar Prado had 9-2 third choice Fall Fashion in front, getting the half in 47.82 and three-quarters in 1:12.89, while battling with 3-1 second choice Menifeeque. Down the lane, Menifeeque made her bid and got 1 1/2 lengths clear with a furlong to go, but Ender's Sister, who had stalked the pace in third early, angled off the rail and wore her down in the final strides to beat her by 3/4 length in 1:45.66 for the 1 1/16 mile event. It was another 2 3/4 lengths back to 17-1 longshot and late closing America America in third. Results Chart

Winning jockey Pat Day said, "She got a good start and was comfortably placed. I eased off the leaders on the backside and when I called on her to respond she responded beautifully. [Menifeeque] kind of jumped away from us but [Ender's Sister] went about her task in a very professional fashion and we got by her late." By winning both events, Pat Day completed a rare Florida Oaks-Tampa Bay Derby double, a feat he also accomplished in 1998.

The older fillies and mares were featured in the Grade 3 Hillsborough Stakes at 1 1/8 miles on the turf. A full field of twelve went to post, with Madeira Mist sent off as the 5-2 lukewarm favorite. 10-1 shot Strait from Texas and 54-1 longshot Love Sting battled on the front end most of the way around, and they rattled off fractions of 24.71, 49.07, 1:12.80, and 1:37.09. The fast pace set the race up for the closers who quickly took over in the final furlong. Favored Madeira Mist, stalking the pace in fourth early under Edgar Prado, made her move at the top of the stretch, and drew even with the leader inside the 1/8 pole. 3-1 second choice Coney Kitty, back in seventh early, advanced through traffic on the turn and came on strong down the lane to prevail over the favorite by a neck, in a time of 1:48.83 over the firm course. It was another neck back to another closer, 7-1 shot Alternate in third. Strait from Texas held fourth while Love Sting faded badly and finished ninth. Prado claimed foul against Santos for interference in the stretch but the stewards disallowed the claim, allowing the result to stand. Results Chart

Winning jockey Jose Santos commented on Prado's foul claim: "His horse hit mine in behind and made her go sideways a bit. It was a very tough call, but I'm very happy. I was concerned about it, but they have stewards that understand when a horse touches another from the rear end it always wants to go to sideways. I think this was an excellent race. This racetrack has been improving more and more, and is going forward every year. I'm real happy about that."

Edgar Prado, aboard second place finisher and beaten favorite Madeira Mist, said of the claim of foul, "She came out pretty good and my horse ended up in the seven path at the wire."