The traditional feature at Oaklawn Park on Presidents' Day is the $750,000 Southwest Stakes (G3), a major prep for the Arkansas Derby (G1) and ultimately the Triple Crown, and worth 10 points to the winner as part of the Road to the Kentucky Derby. However, due to poor weather resulting in the cancellation of 8 cards of racing, the race and its undercard feature the Razorback Handicap (G3) were moved to the final Saturday in February. Recent rain downgraded the track to sloppy, with temperatures in the mid 50's, fog and mist all afternoon, and an estimated 3,100 fans in attendance due to capacity restrictions.

A field of 7 three-year-olds contested this 1 1/16 mile trip around the historic Hot Springs oval, with undefeated Essential Quality sent off as the 9-10 favorite off wins in the Breeders' Futurity (G1) and Breeders' Cup Juvenile (G1) both at Keeneland. In to challenge him included 6-5 second choice Jackie's Warrior, 4th in the Breeders' Cup Juvenile after winning the Hopeful (G1) and Champagne (G1), and 7-1 third choice Spielberg, 4th in the Robert B. Lewis (G3) after winning the Los Alamitos Futurity (G2).

Jockey Joel Rosario sent Jackie's Warrior to the lead first time by through fractions of 23.52, 48.11, and 1:13.59 while pressed by 16-1 fourth choice Woodhouse and stalked by 40-1 fifth choice Saffa's Day. Turning for home, Jackie's Warrior tired as Essential Quality, 5th early, came out 4 wide and swept to the front, quickly opening up a 2 1/2 length lead through 1 mile in 1:39.05. Kept to task by Luis Saez, Essential Quality kicked clear to win by 4 1/4 lengths over late-running Spielberg in 1:45.48. It was another 4 1/4 lengths back to pacesetter Jackie's Warrior third. 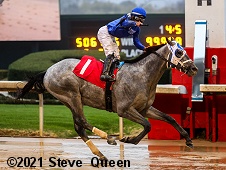 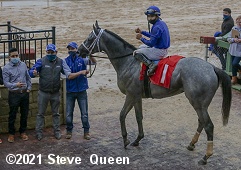 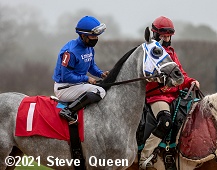 Left: Essential Quality in the winner's circle. Winning trainer Brad Cox said, "Luis put him in a good position. I was little nervous when I saw the :48, but look our horse ranged up at the half-mile pole in a nice comfortable way. He showed up and ran his race. It was somewhat of a relief to get this race over with. The delay of the race, the track condition, just a lot of obstacles to overcome. Good horses do overcome, but it doesn't mean the trainer doesn't worry. We just want to wrap him in bubble wrap and get to the next race."

Right: Essential Quality in the post parade. Winning jockey Luis Saez said, "I'm so excited. I'm very happy to be riding this horse. We were waiting a long time. What a talented horse. We knew the speed was to our outside. The plan was to try to follow him (Jackie's Warrior) the whole way. Everything came together. He broke pretty well and at the 5/8th pole he took the bridle and was really pulling me, but I was waiting, just trying to wait with him. We came to the stretch just so easy. He switched leads and just took off. What a nice horse. He finished very strong and I still had a lot of horse." 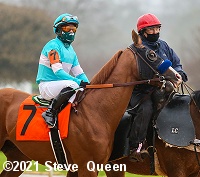 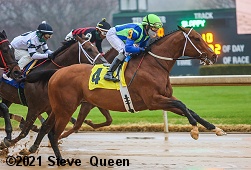 Left: Second place finisher Spielberg heads out for the post parade. Trainer Bob Baffert said, "After the start, Martin didn't panic. He stayed back there and rode his race. He was just moving a little (in the gate). But, you have to give credit to the winner. He's a good horse. I'm proud of the way (Spielberg) ran. He showed up. I'm very happy. Other than the gate, everything went well. He shipped well and he ran well." Jockey Martin Garcia added, "He missed the break I put him in the race and I on the outside, I just followed the winner every step. When I asked him, he went, but the winner was already being asked. I think my horse will be better at 1 1/8 miles."

Right: Third place finisher Jackie's Warrior leaps to the lead shortly after the start. The Steve Asmussen trainee improved his record to 4 wins, 0 seconds, and 1 third in 6 starts, earning $577,564 for owners Kirk and Judy Robison.

The field for the Southwest Stakes during the post parade.

Kicking off the Saturday stakes trio, a field of 7 older horses went to post in the $600,000 Razorback Handicap (G3) also at 1 1/16 miles. Breeders' Cup Dirt Mile (G1) 5th place finisher Owendale was sent off as the 7-5 favorite, unraced since finishing 3rd in the Clark (G1). In to challenge him included 2-1 second choice Mystic Guide, unraced since a close 2nd in the Jockey Club Gold Cup (G1), and 9-2 third choice Hunka Burning Love, 2nd in the Fifth Season Stakes after winning the Jeffrey Hawk Memorial.

Jockey David Cabrera sent Hunka Burning Love to the lead first time by through fractions of 23.69, 47.61, and 1:11.99 while pressed by 23-1 Long Range Toddy and stalked by 13-2 fourth choice Silver Prospector. Entering the stretch Hunka Burning Love tired as Mystic Guide, 5th early udner Luis Saez, swept 5 wide to the front through 1 mile in 1:38.08. Mystic Guide powered away late to win by 6 lengths over Silver Prospector in 1:44.33. It was another 1 1/4 lengths back to late-running favorite Owendale third. 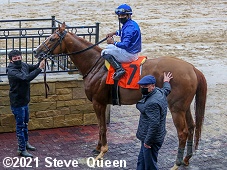 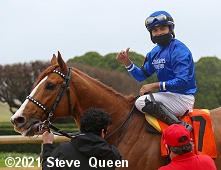 Left: Mystic Guide in the winner's circle. Winning trainer Mike Stidham said, "Look, it's so rewarding with a horse like this that we were really patient with as a 3-year-old. We spaced his races, gave him time to develop. It's really paying off now. That's the best part of it all. Jimmy Bell and Dan Pride are just always allowing us to do the right thing for the horse. Now, we're paying dividends. As far as they go, he'll run. Certainly in the back of our mind, the Dubai World Cup is there. Now, after a performance like that, it's on the table, for sure."

Right: Winning jockey Luis Saez celebrates aboard Mystic Guide after the race. Saez said, "Everything was perfect, that was the trip that we wanted. We had the perfect spot from the outside. I just tried to keep the horse clean and he was comfortable all the way. He got to the top of the stretch and took off. It was a great race." 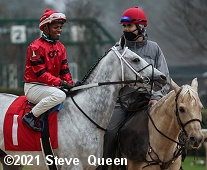 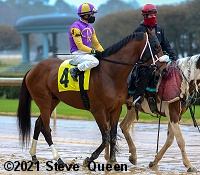 Left: Second place finisher Silver Prospector in the post parade. Jockey Ricardo Santana Jr. said, "He had a beautiful trip. I can't make any excuses for that horse today. The pace was perfect. I sat behind the speed. I was off the fence. When I started riding him, he gave me everything he had."

Right: Third place finisher and beaten favorite Owendale in the post parade. Jockey Joel Rosario said, "Good trip, but it was on a sloppy track. It looked like the winner was doing it easy, in hand. He still ran well. Probably if it wasn't raining, he would have run better." 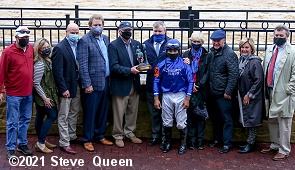 Left: Shortly after the start of the Razorback Handicap.

Right: The trophy presentation for the Razorback Handicap.

The $200,000 Spring Fever Stakes featured a field of 6 older fillies and mares sprinting 5 1/2 furlongs. Music City Stakes third place finisher Kimari was sent off as the 7-10 favorite over 9-5 second choice Amy's Challenge, 2nd in the American Beauty Stakes after winning the McConnell Springs, and 4-1 third choice Casual off an allowance win after finishing 4th in the She's All In Stakes.

Amy's Challenge was quickest away through fractions of 22.54 and 46.54 while pressed by 18-1 Ain't No Elmers and stalked by 23-1 Shesomajestic. Turning for home, jockey Joel Rosario, 4th early aboard Kimari, came out 4 wide to sweep to the front through 5f in 58.02. Kept to task by Rosario, Kimari drew off late to win by 4 1/4 lengths over late-running Casual in 1:04.07. It was another 2 lengths back to Shesomajestic third. 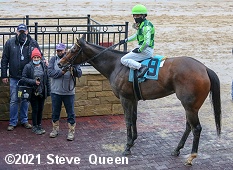 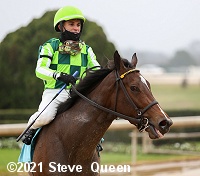 Left: Kimari in the winner's circle. Winning trainer Wesley Ward said, "She's sound as new money. And, she probably ran one of the best races of her life. Only thing different this year over last year (when she won the Purple Martin) was the outside post. It was to her advantage this year. We were fortunate. It made Joel's job easier."

Right: Kimari returns after the race. Winning jockey Joel Rosario said, "She ran very big. She was responding to everything I was asking for, Turning for home, she took the lead in hand. Looked like any time I wanted to go, she was there for me. I was very confident. That was a very big performance." 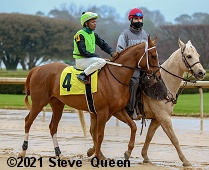 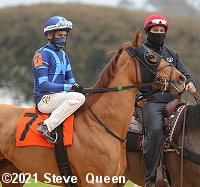